Relative Top Speeds of Common Land Animals: Is the Cheetah Really the Fastest?

If you were to ask a child what the fastest land animal was they would most likely respond proudly by yelling out "a cheetah!" But are they actually correct? Well, it depends on what "speed" you are talking about. At a top speed of about 74.9 miles per hour relative to the ground, a Cheetah is typically seen as the fastest land animal alive today. But what if we considered the "scale" speed of today's much smaller (and larger), but still quick, creatures? Or what if we considered a creatures speed in terms of how many body lengths it could move within a given period of time? In this article I attempt to answer these questions by scaling the speeds of many of today's common animals relative to that the size of a human.

For the scaling to be reasonable across all shapes and sizes of animals analyzed, the creature's longest length will be used as the scaling factor's basis. Subsequent scaling of speed for comparison will also be made based on the animal's weight and volume compared to that of a human. The volume of the creatures based on an average biological density of approximately 1062 kg/m3 or about 66.3 lbs/ft3. This is actually the published value for humans, but we will assume that these land animals have the same density. For the body length speed calculations, the creatures longest length or height was used as the unit of distance.

Before we can start scaling up the speeds other creatures we must first define a baseline for what a human is in terms of both size and speed. For this analysis I have chosen to use Usain Bolt as a baseline for the comparison because he represents one of the fastest humans that exist today. He ran the 100 meter dash in a record 9.58 seconds resulting in top speed of 27.44 miles per hour (average speed of 23.35mph), He weighs in at a whopping 210lbs (94kg) and is 6ft 5in (1.95m) tall. 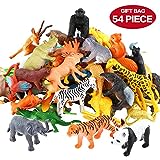 The top speeds for animals were taken from various sources who reported that the measurements were taken over very short distances of about 1/4 mile or less. In most cases the speed measurements were taken over distances ranging from 100 to 300 feet. The weights and lengths of these creatures represent average values for both males and females and was also obtained from various sources.The table below lists 20 common animals as well as their average weight, longest body length, estimated volume, and typical top speed.

Now that we have set the stage and gathered our data, this next table shows the adjusted (scaled) speed for both length and weight. To put things into perspective, I have also included the creature's speed in terms of body-lengths per minute. This will help you get an idea for how fast the creature would feel like it's moving relative to it's own body.

The table below ranks all of the creatures from fastest to slowest based on the average rank for the fastest normal, weight adjusted, length adjusted, and body length top speeds.

So with all these calculations what animal really is the fastest land creature? When looking at the combination all relative speeds, the lowly cheetah still ranks highly but it is not faster than the rabbit. The human only ranked twelfth out of the twenty-one creatures analyzed and was easily outpaced by the cat, dog, mouse, and even the tiny ant. Not surprisingly the garden snail as well as the three toed sloth rounded out the bottom two as the slowest overall animals in this analysis.