How To Cross Country Ski With Alaskan Malamutes

Skijoring is actually bikejoring only on skis! It is yet another great sport that you can participate in with one dog or several. Your dog does not have to be malamute or another arctic breed. Actually any dog breed will do as long as they are thrilled by pulling/working and they happen to love the snow!

In order to skijor properly with your dog though, as in all things, you need to know the basics before attempting this sport. You also need the proper equipment - for you and for Fido - and you need to have an idea of what you are getting into BEFORE you hit the trails.

The basic concept of skijoring is that the human part of this equation (the skier/that's you) has on cross country skis and uses poles while the canine part of this equation (the dog or dogs) has on a harness and a skijor line (also called sometimes a tugline or a towline) runs between you. Together, you perform a delicate ballet of cross country skiing while your dog or multiple dogs pull you on trails made specifically for dog teams and other users. If the dog loves to run and to pull, and equally loves the snow, you have the makings for a spectacular ride!

WHAT YOU NEED FOR SKIJORING

For The Human Part

For The Canine Part

Before You Hit The Trails - About The Sport

Skijoring - Sport For Any Dog That Will Pull and Loves Snow The actual words are not essential but this gives the flavor of what they should know. We train our malamutes on a scooter just walking behind it with them in full harness and on the tugline with a chin strap on. It is imperative that the dog or dogs know the commands and will obey the commands before you take them into a REAL situation as it can turn ugly without proper training. You can find this information in a bit different form on many sites including sleddog.com.

Remember - it is not important the exact verbiage you are using - it is the consistency of the commands and the fact that they know them without fail that makes any urban mushing activity a success!

Any words will work - as long as you understand your intentions with the word or phrase, and THE DOG understands it - practice, practice practice!

When The Snow Has Melted

You can still train in the off season when there is no snow. Bikejoring is the closest thing to skijoring but things like rollerblading and scootering are other cross-training sports and uses the same equipment for the dog. The human counterpart may need more in terms of equipment and protection but the commands are basically the same and all the rules apply as for skijoring.

Some mushers also train their dogs with a 4-wheeler and that seems to be a good alternative for teaching some of the tougher commands.

As in all things, practice makes perfect and spend the time with your dog or dogs to assure that they are well behaved and that they know what to do when you issue a command. That can save you a lot of grief and any number of bad experiences. Reinforce those commands when you are doing everyday things with the dog or dogs. Use the commands exiting the house or the car, putting their food down. Issue the commands walking past people on the street or sidewalk.  Take them everywhere and anywhere and make sure that they are WELL socialized.

Never tolerate ANY amount of aggression from your dog toward people or other dogs. If you are having trouble with your dog's behavior, make sure you consult an obedience trainer and make sure you take steps to get that under control. As in raising children, training a dog is an ongoing work-in-progress kind of deal and without adults taking the time to teach them properly, they can only do what they discern to be best in a situation be it good or bad!  I am a firm believer that there are no bad dogs, just bad owners. It is our job as with children to teach them in the way that they should go.

You Can Buy Books And Equipment Here On Amazon 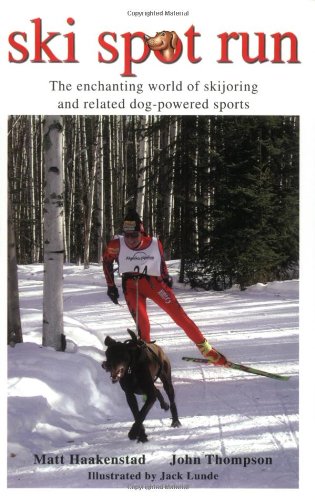 The Simple Guide to Getting Active With Your Dog
Buy Now

Great Video On Skijoring For All Breeds

Great Sources of Information for Skijoring

Sources For Equipment And Information