My Dogs All Have Their Favorite Sleeping Spot

Do Dogs Really Sleep More Than People Do?

There are many factors that affect how much a dog sleeps. Canines seem to sleep much more and much lighter than people do. Dogs have particular sleeping habits that are much different from human beings. Yet, it seems they dream like people do, and need their sleep for many of the same reasons we do.

It is important to understand that dogs do not have regular sleeping routines the way people do. We usually sleep about 7 to 8 hours each night, but dogs often have intervals of short naps throughout the day.

There are many factors that contribute to the sleeping patterns of your dog. Age, personality, breed, stimulation in the household, health of your dog, and activity level. The one thing fo sure is, dogs sleep more than people do. For example, a pampered pooch sleeps far more time than a working dog like a police rescue dog.

Dogs instinctively modify their sleeping habits so that they are alert when they hear something, or there are things going on, and can also rest when things around them are quiet.

A typical dog will spend 1/2 of their day sleeping. About ⅓ of their day napping and about ⅕ of their day being active. So an average dog will sleep about 12 - 14 hours daily. But it is not usually continuous. Puppies often sleep 18 hours daily. These are rough estimates and don’t apply to every single dog. Your dog may snooze more or less than this amount, and it is probably nothing to be concerned about. With each pet, it can easily vary. mu 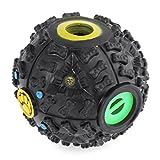 How Much Do Dogs and Puppies Sleep?

A Dog's Sleeping Habits Change for Many Reasons

Sometimes you may notice changes in your dog’s sleep pattern. A dog may sleep differently simply because there was a change in their diet. Dog food that is of lower quality my not be providing your pet with the proper nutrition, and they may get more sluggish. Some dog food has ingredients that are more difficult to digest. This causes them to spend some of their energy digesting the food and they feel more tired, instead of energetically playing.

Older dogs will sleep more. They may spend some of the night moving around and being awake, so they are sleeping more during the day. However, if you notice big changes in their sleep patterns, especially if they seem to be sleeping more excessively than they used to, they could be dealing with some health issues. It is a good idea to go to your vet to have your dog’s thyroid and heart checked, among other things.

Puppies will sleep a lot, because just like human babies, sleep helps them develop and grow. Sleeping 18 hours a day is not unusual for an ever growing puppy. However, use your judgment. If you think your puppy is sleeping too much, have them examined by a veterinarian. You want to eliminate any problems with your puppy’s health and to check for simple things like infections.

Some elderly dogs can get a form of dementia similar to people. Their early stage cognitive dysfunction can result in the dog being confused in new or unfamiliar situations. The older dog could have periods of wakefulness because they are feeling pain. When a dog feels uncomfortable they might vocalize, pant, be restless, pace, or show other signs of discomfort, that may not be as noticeable during the day. Some dogs may have the urge to urinate more during the night which might interfere with their normal sleep patterns.

If your dog’s sleeping hours have changed, it might be a good idea to take them to the veterinarian to get a full physical checkup. Anything from kidney disease, urinary tract infections, hormone imbalances, intestinal upsets, and neurological impairments can be just some of the reasons your dog’s regular sleep has been disrupted.

When Your Dog Has Trouble Sleeping

Anxiety is another consideration as to why your dog has different sleep habits. Thunderstorms, certainly disturb a dog due to their superior hearing. Dogs hear everything. So if people are outside your home during the night, your dog will automatically get up to protect their territory and their owners. This hyper vigilance can wake them and you many times during the night.

Sometimes, something simple like an orthopedic bed can help a dog feel more comfortable at night and get a restful slumber by easing pressure on their joints and bones.

If your dog is having trouble sleeping at night, it is important not to punish or yell at your dog. The best thing to do is calmly ease your dog back to sleep.

Sometimes pet vitamins or changing their diet may help them sleep better and slow up or minimize the dementia or reduce their anxiety. Your veterinarian may prescribe medications that can help your pet get a better night’s sleep, but it is important to understand the side effects that go along with any prescription or supplement your dog may take.

Puppies need a lot of sleep. A puppy will sleep better if they are in the same room as you. They find comfort in being near their owners. From the very first night you bring them home, it is important to have a set place for them to sleep. 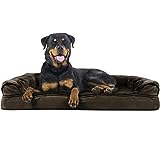 Sweet Dreams and Our Dogs

Different breeds are known to sleep more or less hours in the day. Dogs like Newfoundlands, Mastiffs and St. Bernards are big dogs who can sleep as much as 18 hours a day.

Dogs sleep more hours in part because they sleep lighter than we do, wake up more often, and are more bored than we are. Their sleep patterns respond to the activity level in their surroundings.

The sleep patterns of dogs are very similar to humans. When they first fall asleep, they enter a quiet phase, where their breathing slows, and their blood pressure and body temperature get lower. Their heart rate drops. Then your dog enters the active stage, where sleep is deeper. REM - rapid eye movement - takes place as the dog vocalizes by barking, whining, During REM stage, it is believed dogs dream, just as people do.

If you have ever seen a dog sleeping, you most probably have seen them, on occasion, with their legs twitching, or perhaps whimpering. It would appear that dogs do dream. Structurally, a canine’s brain has similarities to a human being’s brain. When electrical activity has been done on dogs brains, their brainwave patterns also resemble humans. Dogs have sleep stages, just as people do. Recent studies done on animals that are of lower intelligence than dogs have shown that simpler animals dream also. A study done at MIT by Matthew Wilson and Kenway Louie, showed that rats dream. The scientists used electrical recordings on rats while they ran a maze when they were awake. When the rats were asleep, their patterns of brainwaves indicated the rats were dreaming about the maze they had run when they entered the dream stage of their sleep. The patterns were so specifically clear in the rats that the scientists could easily tell what part of the maze, the rats were thinking about, and even if the rats were dreaming about standing still or they were moving in their dreams in the maze. The researchers were cautious about outright stating that rats dream, but they said "The animal is certainly recalling memories of those events as they occurred during the awake state, and it is doing so during dream sleep and that's just what people do when they dream."

Based on this experiment, it is fairly easy to believe that dogs also dream. For most of us, we don’t need a degree in science to know that we have witnessed our dogs dreaming. As you watch your pet fall asleep. It takes about 20 minutes for a dog of an average size to usually start dreaming. Their breathing becomes irregular and shallower than it was when they first fell asleep. You might see their muscles twitch, their paws in motion, movement of their eyes, and even some make vocalizations.

Dogs and Their Dreams

Why Dogs Circle and Dig Before They Lay Down

Another sleeping habit of dogs, is to circle around and move their paws in a digging like ritual before they lay down. It doesn't matter if their sleeping surface is hard or soft, indoors or outdoors, or if the dog is miniature or giant size. Dogs do this for many reasons.

Some of it is a vestige from their undomesticated days, when they would dig to make a safe and comfortable place to rest. Sometimes, they may do this now because they are seeking to be cooler if they are hot, and warmer if they are cold. Dogs dig before they lay down, mainly out of instinct. The pads in their paws have glands that send out a scent that gets released when they scratch at a surface.

When they dig in the area they are going to lay down, they are marking their spot as theirs with their own scent. `

The sleeping habits of dogs, are both similar and different than our sleeping patterns. Science will continue to study our canine friends to learn more about the needs and benefits of sleep. By learning about dogs, mankind will learn more about ourselves.

Do You Think Dogs Dream?

Have You Seen Your Dog Dream?