July 2010 my dachshund suddenly was having trouble breathing. He sounded like he had a cold. My veterinarian was on vacation and as with most pet owners of pedigrees, I was uncomfortable taking him to one that did not know his health history since birth.

In Maria Treben's book Swedish Bitters "The Long Life Elixir" it mentioned all the different ways Swedish Bitters had assisted with her health and that of others. Among these was the assistance of helping someone breathe by applying it externally directly underneath the nose and right above the facial cheeks where one has cheek bones. With dogs being mammals, often times human measures work on dogs. Knowing this from being around dogs most of my life, I risked using Swedish Bitters on my dachshund's exterior.

I applied a small amount of Swedish Bitters to a large cotton ball. My second step was applying it in a single stroke on both sides of my dachshund's nose right above the lips, directly underneath his nostrils where his nose is black, along the entire top of his long nose, and then on his forehead. It was difficult to do this. My dog was uncooperative and did try to snatch the cotton ball out of my fingers. It was worth the effort.

My ingenious dachshund managed to lick off the Swedish Bitters I had swiped on both sides of his nose and underneath his nose. At first I was upset, but my dog actually loved the robust taste of the Swedish Bitters; licked off what he could. Under fifteen minutes later, he sneezed three times and an ugly thick lawn green colored mucous came out of his nostrils. Of course, I properly took care of this with a facial tissue and disposed of the tissue via the trash can. My dachshund's breathing resumed normal. The trouble he had breathing was gone.

I continued to keep a close eye on my dog fearing side effects. None appeared and this first application lasted a month. My dachshund thirty days later came down with the breathing problem again, right after my husband mowed the lawn. I had caught my dog sniffing the lawn like one does flowers and contribute his difficulty breathing to his persistence in enjoying the just been mowed lawn's fragrance. Some of the cut lawn undoubtedly gets inside up into my dog's nostrils with each dogie sniff. I realized his first bout was right after a lawn mowing too so cause was found. Like before, I applied the Swedish Bitters to my dog's nose and forehead. Again, the same thing happened and within fifteen minutes the symptoms had disappeared.

Yes, I did tell our Veterinarian when he returned from his vacation. Had him thoroughly exam my beloved dog. Showed him the bottle of Swedish Bitters. He smiled. The herbal contents are actually very good for dogs; nothing for concern. This was indeed a relief.

Today, years later, I continue keeping a large bottle of Swedish Bitters in my refrigerator so it will last longer and always be handy. Its health promotional qualities have served me well long-term for my overall health maintenance by taking a teaspoon daily. My dachshund has not had another bout of his breathing problem. We have mowed the grass since these two episodes. Noticed he has not sniffed the lawn as much after mowed. I am, however, prepared just in case and am grateful for what the Swedish Bitters did for my very dear pet.

To your pet's good health!

For more about Swedish Bitters

Want to learn more about Swedish Bitters? All are welcome to visit online at Amazon.com, Swedishbitters.com or other health store related websites.

To every one's good health! 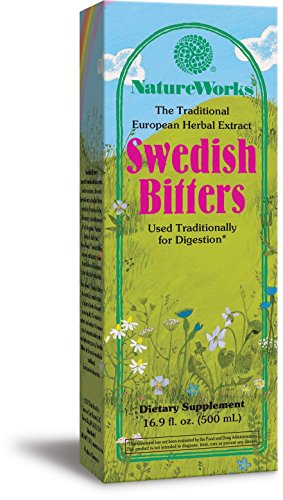