The Enduring Appeal of Scotty Dogs

According to an article I read several years ago by one of the leading experts on antiques and collectibles, collecting Lassie (Collie dog) items is the leading dog collectible. After Eric Knight wrote Lassie Come Home in 1954, which was followed by a Lassie TV show and movies, and items were sold by the millions. BUT the article went on to state that scottie dog (Scottish Terrior) items are the number two dog collectible. Certainly most people all over the world are able to easily recognize the breed, and there are a number of antiques and collectible scottie dog items available. Proof of their popularity is when they became a token for Monopoly games.

The Scottish Terrier was originally called the Aberdeen Terrier and was developed in the Scottish Highlands during the early 1880s. They were bred to fight off badgers and also prized for their ability as hunters of mice and rats in the castles and fields. The Scottish Terrier was first registered by the American Kennel Club in 1885. The scottie has been affectionately called a big dog on little legs. I once read that they are best described as "Power in a small square package." They are most often black in color, but scotties can also be brindle, iron gray or Wheaten (white). While their outer coat is wiry, they have a second soft undercoat. Their large jaw or muzzle gives them the ability to chew through almost anything and I can verify that since our first scottie managed to chew his own dog door through the redwood gate in our back yard. He also could chew golf balls until they were a flattened stringy mess in record time. Scotties are also adept at digging and I have filled in numerous holes in our yard over the years.

The scottie dog has achieved its place in American history when Franklin D Roosevelt adopted his beloved Scottie named Fala, who sat next to him during the famous Fireside Chats. Shorly after becoming president, George W Bush adopted Barney who was often filmed by the media. While George may have been in charge of our country, Barney certainly excercised his independent nature and and Barney never seemed to heed George or the Secret Service's commands. They are independent and stubborn and most often attach themselves to only one or two persons.

Ofen the scottie dog has been an advertising symbol for stereotypical Scottish thrift. Scottie images have appeared on advertising for banks such as blotters, calendars and paperweights. For a time, Texaco Gas and Oil company used two black and white scottie dogs to advertise the long life of their motor oil. The best known scottie advertising is the association with fine Scotch Whiskey. Both black and white scotties have been used to advertise Scotch and soda. Tiny scottie dogs made of French Ivory were attached to ribbons and placed around the neck of bottles of Scotch. These wonderful little scotties, with the addition of a jump ring make perfect little charms to be worn on necklaces and charm bracelets.

I have an extensive collection of various scottie items, beginning with a sign that says,"One Scotty Dog and His Two Caretakers Live Here." My collection began back in the 1980s when we adopted our first rescue scottie. Shortly after the adoption, a friend gave me an antique picture called "The Loyal Scotty", with the legend written on the back of how he continued to visit his master's grave each day, until he himself died. Not long after that, I purchased a scotty boot scraper and a salt and pepper set, and my quest for scottie antiques and collectibles was well underway.

Today, I have scottie items that include mugs, children's dishes, adult dishes, jewelry, pajamas, ceramic scotties, glass scotties, photographs and postcards, cookie jars, and well you get the idea. Of course my favorite scottie dogs have been Angus with his long mustaches and waddling walk, Gwendolyn who was dainty and pert, and Max who should have been named Houdini for his escape abilities and our sweet Mr. Mac Tavers who passed away in 2008.

In 2010, we adopted Alicia, a West Highland Terrier (Westie) and she is a diva princess, but we often think about and talk about the Scotties we have owned and loved. 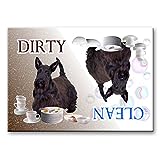 The Scottish Terrier: A Complete and Comprehensive Owners Guide to: Buying, Owning, Health, Grooming, Training, Obedience, Understanding and Caring ... to Caring for a Dog from a Puppy to Old Age)
Buy Now

Charmed by Charms and Charm Bracelets