My bird went missing and I got him back - 3 times!

When I bought my parrot he had his wings clipped. I let his wings grow back so he could fly around. I hated the thought of him not being able to fly.

On three occasions he went missing. When I mean he went missing, he flew out of the door. Not only once but THREE TIMES! I can’t believe I got him back that many times. I feel so lucky!

This day that he went missing I felt stupid! I was at the back laundry door, standing there with my husband with the door wide open. I remember we were arguing about some broken glass on the ground just outside the door. I was trying to get the vacuum out to clean up the glass and Byrd flew straight out the door.

I started running around the neighbourhood calling his name "Byrd". I felt so stupid for having done it (lost him again!) I couldn’t find him anywhere. I was so frantic, I didn’t realise I didn’t have my shoes on until later. For hours I looked for him. I did finally see him flying through the air squawking. I think he could hear me. But he must have been confused as he was circling the air. I couldn’t believe how high he was! Then he was gone. I kept looking until it went dark.

I couldn’t keep all these terrible thoughts out of my head. Like how he might have been eaten by a cat, killed by a dog. Attacked by other birds. Or maybe someone had found him and he was being looked after. It was dark and I kept thinking how he must have been cold and hungry. He didn’t know how to find food.

I knew there was nothing more I could do but go to bed. It was very hard to sleep that night. So when morning came, I was up as soon as the sun was. My husband asked me where I was going and I said to go and find my bird. I took an empty wrapper from a cherry rip with me. He goes nuts when he sees those chocolates! 5 mins into the walk, I get to an area where I found him the last time he went missing. I thought, you never know.. Creature of habit maybe??

The area is a clearing between houses with lots trees and shrubs. It’s quite early in the morning and I can hear the birds waking up. They are all making their calling sounds. So I go about calling "Byrd", not really caring about the poor people that still are asleep in the beds.

Then I hear this faint woof whistle sound. I start to walk faster and the whistle gets louder. Until finally I am straining my neck looking up through all the trees and here is my little blue boy all fluffed up and half asleep in a small tree. I thought to myself, thank god he isn’t way up high in a massive tree. But still, he was high enough for me not to be able to reach him!

I can’t remember what I said to him, but it would have been along the lines of "where have you been?" But I remember he said to me "what are you doing?" and I said "looking for you, you little bugger!"Not funny then, but is funny now...

It felt like I had been standing there for an eternity trying to persuade him out of the tree. I had the wrapper and I was rustling it pretending to eat something and saying other things that usually made him come to me. He was inching closer to me and leaning down as if he was going to fly to me and then would stop. And then I asked him if he wanted a cup of tea. It took 30 mins for him to finally come down and land on my shoulder. I figured he knew he wasn't going to get a cup of tea out here and decided to come home. I gently put him under my jumper and walked home.

When I got home, I put him in his cage and he ate and ate and ate. I have never seen him that hungry before. He was quiet too. It was a few days before he started to talk again.

Ever since that day I think he has been afraid to go outside. Whenever he flies into the laundry and sees the door start open, he flies away deep into the house. Even if it’s just the wooden door opening and the security door is closed, he flys off towards his cage..

A few pointers if you ever have a missing bird:

Start looking straight away. My bird was found in approx the same area all three times.

Take a treat with you. For example an apple or maybe something that they really like that they can’t have and they always try to pinch it from you. For Byrd it was "cherry ripe" chocolate. He can recognise the wrappers by site.

Never throw anything up the tree to make them come down and don’t try to poke them with for example a stick. These actions will only make them fly further away.

Don’t give up too easily. I found my bird the next day!

Put flyers out with a photo of your bird and with a contact number. If your bird is friendly he/she may have landed on someone's shoulder or flew in their patio area etc. I would be wary about mentioning a reward though... 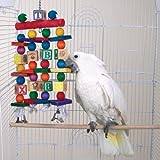