The Turkish Van, a medium to long-haired breed of domestic cat, originated in the Lake Van region of Eastern Anatolia of modern Turkey. Originally the Van was called the Turkish cat, but was changed to the Turkish Van in 1979 in the United States. The same name was adopted in 1985 in the U.K. This name change was initiated to distinguish the Turkish Van from the Turkish Angora cat which originated from central Turkey.

Origins of the Turkish Van Cat

Legend has it that when Noah’s ark arrived at Mount Ararat approximately 5000 years ago, two white and tabby-red cats that were aboard the ark did not wait to disembark with all the other animals. Instead, they leapt into the water and swam to dry land. They then traveled approximately 75 miles to the Lake Van area south of Mount Ararat and have lived there ever since.

However it arrived to the area, the Turkish Van cat is both a rare and ancient breed that originated in central and southwest Asia – around a region dominated by Lake Van in Turkey; hence, it has been known as the Van Cat.

No one knows for sure how long the cats have been in this area, but native decorations and ornaments can be dated as far back as 5000 B.C. depicting cats very similar in appearance to the Turkish Van. This would make the Turkish Van one of the oldest surviving and genetically-pure cat breeds.

Later, the Turkish Van cat was brought into Europe by returning crusaders sometime between 1095 and 1272 A.D. It has been known by various different names: Turkish cat, Eastern Cat, Ringtail Cat, the White Ringtail, and the Russian Longhair.

At the time that the Van was first brought to England in 1955, and later when it came into breed recognition in 1969, it was known at the Turkish cat. It was later renamed to the Turkish Van cat in 1979 to differentiate it from the Turkish Angora cat.

The Turkish Van is considered to be a regional treasure in its native homeland, and has not been readily available for trade to other parts of the world. The Turkish Van was first brought to the U.S. in 1982; and, in 1994, it became a recognized breed in the Cat Fanciers’ Association (CFA) and eligible to show.

Turkish Van cats continue to be relatively rare even in areas where they have been known to exist for centuries.

The Turkish cat brought to England became known as the Turkish Van cat to differentiate it from the Turkish Angora cat (pictured on the right) which originated from Central Turkey. Although both cats originated in Turkey, they are two very distinct breeds that developed in two different regions of Turkey. The Angora is much smaller and more delicate than the Van.

Cat fanciers traditionally recognize the Turkish Van as a white, semi-longhaired van-patterned cat with color restricted to the head and tail, with the body of the cat being white. Breed standards permit the cat to have a body spot or spots, but no more than 20% of the cat’s coat may be colored. 80% or more must be white. And its spots should not detract from its overall appearance.

Classic Van coloration is red tabby with white; however, it is acceptable for the head and tail to contain one of several other color variations: black, red, red tabby, blue, blue tabby, blue-cream cream, cream tabby, brown tabby, tortoiseshell, plus others. Any other color should show no signs of ever having been bred with the point-colored breeds. It should be noted however that not all color variations are recognized by all registries. To see a color breeding table, click here.

Not all registries recognize the all-white Turkish Van – in fact, the majority do not. Cat Fanciers’ Association (CFA), the world’s leading registry of pedigreed cats, and Fédération Internationale Féline (FIFe), the biggest international cat fancier organization, do not. Both organizations classify the breed by its type and the required van-patterned coloration. Germany’s World Cat Federation (WCF), an international organization as well, recognizes the all-white and the van-patterned cats to be two separate breeds of cat.

Its eyes can be blue, amber, or one eye of each color (odd-eyed).

In Turkey, the Van cat is recognized in its all white form as well as the form with red patterning and a "fox tail", and with blue eyes, amber eyes, or one eye of each color as shown in the images below.

This striking, naturally occurring feature (one eye blue and one eye amber) has come to be expected in the Lake Van region. Outside of this region, the breed tends to have eyes of the same color.

Outside of its native homeland, the Turkish Van was bred in Britain. It was first recognized by a breeder/fancier organization in 1969 – the UK-based Governing Council of the Cat Fancy (GCCF).

Just as is the case with many white animals, especially with blue eyes, the totally white Van cats are prone to deafness and other hearing disorders.

Because the Turkish Van is a naturally occurring breed and evolved to survive the environment in which it has lived, it is a strong, healthy, and vigorous breed. There are no known genetic issues associated with this breed.

A great breed conformation chart can be located by clicking here. The Coat of the Turkish Van Cat - the “Swimming Cat”

A cat’s fur is generally comprised of three different types of hair: guard hairs, awn hairs and down hairs. The Turkish Van cat has only one - awn hairs. This causes their coat to feel soft like rabbit fur or cashmere even when they have shed their winter coat and sport a thinner shorter coat.

Awn hairs are critical for insulation. This characteristic allows the Turkish Van to live in the Van region which has major temperature extremes, both high and low.

At birth the kitten’s coat is short. Gradually, over 3-5 years the ruff (fur on chest) will fill out, and the tail will thicken in to the full typical brush tail. When the climate is cold, the Turkish Van’s coat will be full, providing insulation against the cold. When the climate is warm, the cat sheds leaving a short light coat. Even when they shed their coats in warmer weather, they maintain their full brush tail, and their ears continue to be feathered with fur (a breed standard), causing the cat to always appear soft and fluffy.

It is quite obvious that although this cat was placed in the water, it did not mind it at all. In fact, it even dailies at the water's edge.

The Turkish Van cat has been nicknamed the “swimming cat” because of its apparent fascination with water. Their coat does not have an undercoat like most other cats, enabling it to dry quickly giving it water-resistant characteristics! It is a strong and agile cat, making it an excellent swimmer.

Its interest with water and swimming may actually be a survival trait. The Van lake area is prone to extreme temperatures with summer temperatures reaching well over 100 degrees F (37.8 degrees C). The Van may have had to learn to swim in order to survive the heat.

Although most Van cats are kept indoors, and no longer have the opportunity to enjoy a swim in the local pond, their love and curiosity of water remains. They exhibit this affinity by stirring their water bowls, putting their toys in their water bowls, playing in the toilet, and playing with water running and standing in sinks and tubs. For your cats’ safety, be sure to close the toilet lids, and even taking care to keep bathroom doors closed. Some Turkish Vans have a color patch between their shoulder blades that is referred to as the 'Mark of Allah'. This 'thumbprint of God' is considered good luck in Muslim countries. The Turkish Van as a Pet

The Turkish Van can be a great pet in the right home. Because of its independent nature, and its size and strength, it does not make for an ideal pet around small children.

The breed is healthy and requires little grooming although brushing its luxurious coat once a week is beneficial as well as enjoyable.

The Turkish Van is intelligent, curious, energetic, very active, likes to swim and climb, and meows a lot. Turkish Vans play hard and sleep hard. They are excellent jumpers and prefer high places to floors where they are able to oversee their kingdom. They are able to jump from the floor to the top of a refrigerator with ease. Nothing in high places and on shelves will be safe.

The Turkish Van is known to be brave and an excellent hunter. It is also known to be very protective, even growling when it hears unusual sounds in its environment.

If a Turkish Van deems you to be its person, it will follow you around the house like an ever-present shadow. Turkish Vans bond strongly with one or two humans, essentially for life, and do not readily transfer that affection to another human. This makes it very difficult to move a Van from one household to another requiring it to change its affections. Although both friendly and affectionate, the Van is not a lap kitty. They typically do not like to be picked up and held. Obviously, there will be exceptions. They like to be with you and “into” whatever you are doing.

If you want a cat that sports many of the same characteristics as that of a dog, the Turkish Van may be the ideal pet for you. The Van likes to fetch and learns obedience commands and tricks very quickly! Many Turkish Van owners describe their cat as “a dog in a cat suit” because of its extraordinary temperament.

Want to learn more about the Turkish Van Cats. Click on the links below to explore more. 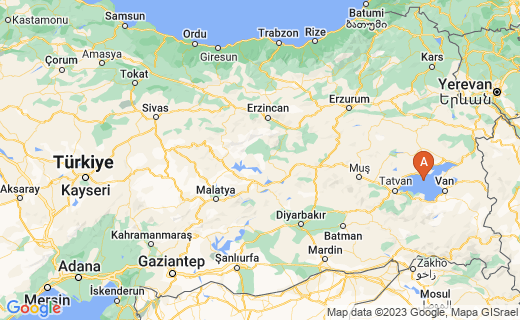 Send a Turkish Van postcard to someone you know.