What Doberman Pinscher Owners Should Know About Von Willebrand Disease

All fans of Doberman Pinschers planning to adopt a Doberman Pinsher one day should be educated about Von Willebrand disease. And of course, any individual planning to breed Doberman Pinshers should not do so until they have screened the breeding specimens. Any specimens testing positive therefore, should be excluded from the breeding pool. Testing for Von Willebrand disease can be a fact that distinguishes often serious responsible breeders from back yard breeders breeding their dogs solely for profits. If you are purchasing a Doberman Pinsher puppy, always ask if the parents were screened for Von Willebrand's. If the breeder says no or if he or she doesn't even know what the disease is, run away and don't look back!

What is Von Willebrand's disease?

While Von Willebrand's disease may basically affect any dog, it is however particularly common among Doberman Pinshers. It is a hereditary blood clotting disorder meaning that in affected individuals that blood does not coagulate as it is intended to. In simple words, when a dog with Von Willebrand's disease scrapes its skin and causes it to bleed, the blood platelets which are supposed to stick together to stop the bleeding in order to create scar tissue (a process known as Von Willebrand factor) instead are unable to clump together causing the wound to bleed more than necessary. What these affected dogs really lack is sufficient production of specific proteins that are responsible for triggering the production of fibrin which is the material scar tissue is made of.

How is Von Willebrand Disease Diagnosed?

Unlike Hemophilia in humans which is sex linked, Von Willebrand's disease affects both sexes and it would affect any dog breed. A simple blood test can test a dog's Von Willebrand factor. According to Marvistavet, a normal Von Willebrand factor in dogs is calculated in percentages and is generally between 70-180%, borderline values are between 50-69% while abnormal values are under 49%. Depending on the results of this blood test dogs are considered either clear, carriers, or affected.

Treatment is based on replacing what is lacking. In other words, a Doberman that is bleeding and is suspected of having Von Willebrand disease, will benefit from a transfusion of Von Willebrand factor.

The ugly part of Von Willebrand disease is that it is often undiagnosed until a bleeding episode occurs. Owners of Doberman Pinchersshould always keep this disease in the corner of their mind. Or better, for peace of mind they should have their dog tested. Aspirin should be avoided because it thins blood. In case of surgery, owners of Doberman Pinshers may feel reassured by requesting their vet to keep on hand fresh frozen plasma or clotting factors. Awareness is always step forward toward prevention.

Unsure if you Own a Doberman Mix? 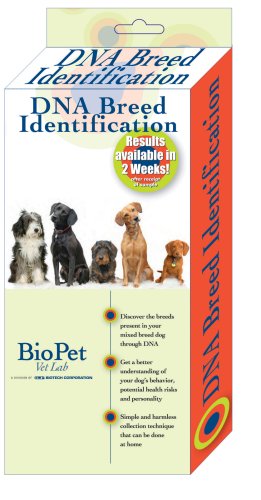 BioPet DNA Breed Identification Kit
The more you know about your dog’s pedigree, the better you can understand its personality, behavior and potential health risks. BioPet DNA Breed Identification lets you collect your dog’s DNA easily and harmlessly, so you can discover the breeds present within it. Since all cells contain the same genetic material, no matter where it is in the animal, just take a cheek swab to obtain the necessary samples. The procedure is 100% painless and can be performed by you at home. After collecting the DNA sample, place the swab back into its paper sleeve, place it and the Customer Information Card inside the enclosed prepaid envelope, and mail it to BioPet. Within 2 weeks of the sample’s receipt, BioPet will mail you the DNA results. 92.5% of America’s mixed breed dog population is covered by BioPet’s 62 validated breeds. In addition to the DNA results, you will receive an Ancestry Analysis Certificate, suitable for framing, and a Behavior, Health and Personality Summary, which provides general information about each of the breeds found. Product Description Advances in DNA testing technology mean that it has become possible to identify the ancestry of any dog by performing a simple test using a cheek swab. The DNA required for the test to be run is isolated from cells that are trapped on the DNA ID Card. All cells carry the same genetic material, regardless of type or location in the animal. Taking a cheek swab is therefore the easiest way to obtain the samples needed for testing.
Buy Now