But this goat fact explains it all.

An Innocent Question With a Legendary Answer

The fact of the matter is that no one can say for sure. It is obvious by their behavior that goats don't like to go out in the rain, but who does? Veterinarians have not identified any physical reasons, such as already mentioned sensitive skin or hide/oils compositions, and so far no "goat whisperers" have come forward with an explanation.

Most modern day goat breeders don't even know the real answer - because it requires an understanding of genetic-driven instinctual responses coded into the actual DNA of goats.

But the real answer involves a much more rational, and ancient reason, and it doesn't have anything to do with a fear of water, or sensitive skin, or even the discomfort of being wet.

It is simply a conditioned response that derives from specific proteins in the molecular chain of the recombinant DNA from the genesis of the species that evolved over thousands of years of environmental conditioning.

Now, thanks to the research of noted mammalogist, Dr. Harry Beard III, (Harrod Haridatious Beard), who has continued to build on the body of data his father and grandfather spent a lifetime accumulating, the real story behind a goat's aversion to rain can be told.

Dr. Harry Beard III and the History of Goatology

For Dr. Beard III, Goatology started with his grandfather, Long Beard, (his real name was Harrod Longarius Beard, but his friends just called him Long), a Rumanian immigrant goat breeder.

Long Beard was dedicated to breeding a line of hybrid goats that would be the most productive and intelligent possible. And he kept detailed notes and diaries of his efforts.

Although he lacked formal education, his keen observance and study of the habits of his goats gave him an insight into the genetics-based instincts of the species that led him to formulate some rather unorthodox concepts regarding the origin of the species.

When he was killed in a freak goat stampede caused by a lightning storm, his goats, notes, and diaries were passed on to Harry's father, Harrod Sparticus Beard - Sparse Beard for short.

Harry's father, Harrod Sparticus Beard, (Sparse Beard), continued the family goat breeding tradition, but with a slightly different goal in mind. He wanted to breed the most unusual goats in the world, and it was in his pursuit of this quest that he returned to Rumania to scour the ancient archives for every scrap of information he could find about the origins of goat genealogy.

He took his young son, Harry III with him, and together they spent hours pouring over the family records of Rumanian goat breeders, including a batch of ancient scrolls they found in an isolated hill village that was their ancestral home.

That was where they found the first vague references to an ancient civilization called Goatropia.

For Harry III it was the beginning of a curiosity that would not be satisfied until he uncovered all there was to know about this mythical Isle that predated human civilization.

During their search for more records of Goatropia, tragedy struck the Beard family once more.

Father and son were climbing down from a recently discovered cliff-cave, arms loaded with more ancient scrolls, when the senior Beard lost his footing and tumbled down the hillside.

In what can only be described as an ironic twist of fate, his final tumble landed him on the horns of a curious Ibex, (mountain goat), that had been watching them from below.

The force of his landing impaled Sparse on the goat's horns, and the fright of the impact caused the goat to charge off the hillside, with Harry's father firmly attached to his head, and disappear into the the wooded lands beyond.

They never found Sparticus' body, and young Harry, at 11 years old, was left with the burden of completing his father's quest.

It took another twenty years of study, but following the clues in that final batch of scrolls, Harry finally discovered the truth of Goatropia, and why goats don't like rain. 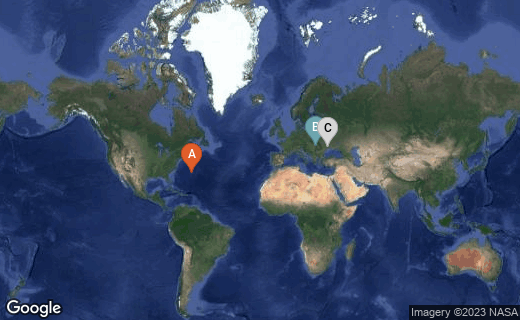 According to the scrolls, Goatropia was the apex of a mammalian civilization that existed thousands of years before man. Unlike the civilizations of man, which focused on technological evolution, the inhabitants of Goatropia pursued the evolution of the mind.

Through untold centuries and generations, they succeeded to such a degree that they were able to control their world merely by the power of thought. Life was good in Goatropia.

All goats lived in harmony, food was abundant - the goats only had to "think" of a food and new plants would sprout bearing the food of their desire, and diseases and illnesses only had to be "thought" away.

But maybe life was too good, too easy, because just as the mental powers of the goats seemed to have no limits, so it seemed did their desires for pleasure and leisure. The fabric of their society began to strain.

Life on the Isle of Goatropia

The more of the scrolls Harry read, the more he saw that the mental prowess of the goats was dooming their civilization. They were becoming vain, and lazy, and each successive generation inherited more of the traits of their ancestors.

They built great open air cities and plazas, but they wanted more. The natural magnificence of their tropical isle wasn't enough. They resented anything that intruded on their pleasures, even the rains that were the lifeblood of the plants and flora that nurtured them.

So they banished natural rain. Using their powers they forced nature to only produce rain in the middle of the night, between the hours of 3 and 6 Am. That way they could party and indulge to their hearts content, and the rain their isle needed would only come while they were asleep. Hence forth it never rained again while any inhabitant of Goatropia was awake.

Gradually, generation by generation, goats forgot what rain was. They forgot what it was like to get wet when they didn't want to.

The Downfall of Pride and Vanity

The goats of Goatropia's vanity and pride soon knew no limits. With no rain to complicate their efforts, personal aggrandizement soon became the only purpose of their lives.

Fantastical hair styles became the norm. Outrageous body coloration was their barometer of pleasure. All made possible - because there was no rain. No matted hair, and no dripping, running colors. Life on Goatropia was good. Too good.

Of course, nature, no longer controlled by the goats, soon returned to it's natural order. The rains came naturally, not on a planned schedule, and the goats of Goatropia didn't know what it was.

Their tropical beaches became flooded, their beautiful body colors ran onto the ground, and their carefully coiffed hair styles hung in wet strands. What was this thing that poured from the skies with no warning?

They didn't know what it was, but they didn't like it.

Goatropia was in decline, and as the ages passed, each new generation of goats knew less and less of their former glory. By the time that the civilizations of man began to emerge, all that was left of Goatropia, were some genetically based instincts tightly wound in the spiral twists of a goat's DNA.

A vague instinct that told them they did not like rain.

In a seemingly cruel twist of nature, even though the Isle of Goatropia passed from knowledge, remnants of memory are still embedded in their essence, and small clues of the past glory still occasionally manifest themselves in today's goats.

As shown in the photo above, although they don't know why, and it is nothing like the displays of their ancient ancestors, goats still like colorful adornments.

And sometimes, when humans aren't watching, it has been revealed that some goats still have the ability to speak... as shown by this secretly recorded video. (viewer warning - the last few seconds of the video gets a little racy - so don't watch it all if you are a sensible person)

But the one stamp of Goatropia that all goats instinctively remember, is that they don't like rain. It messes up their looks.

And that is the answer to why goats don't like rain, it's instinct!

Was the Isle of Goatropia real?

Dr. Harry Beard's research into the genetics of genuri Goatus answered the question "Why Goats Don't Like Rain?," but it also opened a Pandora's Box concerning the existence of Goatropia. Is it a myth or legend? Was it a precursor to the lost land of Atlantis, or is the story of Atlantis a humanization of the legend of Goatropia?

1Informational content citation: most details, including the facts contained in this fictional account are products of the mental wreck commonly referred to as the mind of the author, aka the Curmudgeon.