Wigeon's belong to the Anseriformes Order of birds and the family Anatidae within that order.It is placed in the genus Annas =a duck and the specific name of penelope which derives from the Greek,-a type of duck.

In the UK it is placed on the Amber list of conservation concern { declines of between 25-50% over the last forty years or so}, Due to localized, breeding populations and important non-breeding populations. In Ireland it is also Amber listed the majority of wintering populations occur on less than ten sites. The population in the UK during the winter is estimated at 444,000 birds {2008-2009}. Source the BTO.

They breed in North and Central Europe and Asia. Winters south to North Africa, southern Asia and local in North America. They are encountered on Marshes,lakes, open Moor on migration also estuaries.

The Gaelic name for the bird is Glas-lach, the Welsh Chwiwell and the Irish Rualacha

The Wigeons some times spelt Widgeon, are dabbling ducks of which there are three species. The Eurasian Wigeon, The American Wigeon Annas americana and the Chiloe Wigeon Annas sibilatrix.

All three are similarly shaped with a steep forehead and bulbous rear to the head. The males have a distinctive breeding plumage. They are close relatives of the Gadwall and Falcated ducks.All three are known to hybridize in captivity and the American Wigeon and the Eurasian Wigeon hybridize in the wild.

The American Wigeon was once commonly called the 'Baldpate' a name which still persists in some localities.

The Subject under review here is the Eurasian Wigeon. As always we shall commence with a description of the species under review.

Description of the Eurasian Wigeon

The Eurasian Wigeon is a medium sized duck with a round head and a short bill of a bluish-horn colour with a black tip. The head and neck of the male are chestnut,with a yellow forehead,pinkish breast and grey body. The iris is brown.

The flanks are grey vermiculated as is the back, with a black rear end and a brilliant white speculum {distinctive wing patch} which is an obvious feature both in flight and at rest.

The female is light brown with the plumage similar to that of mallard. Out of the breeding season the males tend to look more like females.The size of the wigeon distinguishes it from most other ducks with the exception of the American wigeon. In the US it is sometimes encountered as an uncommon visitor particularly on the Atlantic and Pacific coasts.

During the Autumn and winter this is one of the commonest species of duck on the coasts of the British Isles. They often occur in large numbers wherever the conditions are suitable for a regular supply of food in the shallow bays and estuaries along the coast.

Wigeons rarely breed in England which seems to have been the case over the last 200 years. According to the Royal Society of the Protection of Birds {RSPB},bird monitoring methods,three to five hundred pairs of wigeon breed in the UK many of which are in northern England and Scotland { 75% in Scotland}. While many non breeding birds are also found during the breeding season and are recorded regularly from inland waters.

The late Colonel Russell, records in his notes that in 1880, on February 15th thousands of wigeon,arrived on the Essex coast on their spring migration. These were all'yellow-bellied', that is stained with rufous under parts,which he considered to be the result of peat-stained water.

The ordinary note of the male wigeon is a shrill whistle a sound which is strikingly in harmony with the usually dreary and retired character of their feeding grounds. However, in general terms the wigeon's fly silently.

They are very active on land,and graze on short grass much in the same manner as the geese. Their usual food consists of land grasses and their seeds,leaves,shoots and rhizomes.The name wigeon is as previously mentioned spelt widgeon,which according to purist is incorrect and a relatively modern innovation. According to Professor Skeat the name wigeon occurred as a early as 1570.

American widgeon courtesy of Clayton Will

Formerly immense numbers of wigeon were captured in decoys and Colonel Montague states " That more were caught in the counties of Somersetshire,and Devonshire than mallard and teal**,and all other wildfowl put together."

From their suspicious nature they have always been considered a difficult bird to decoy. In the Ashby decoy in north east Lincolnshire {East Anglia}, the species was never a common bird,for out of 93,332 'ducks' and teal taken in 35 years,only 2019 were entered as wigeon. This was regarded as being remarkable when the birds were considered to be plentiful on the Humber in winter.

It also seems the proportion does not seem to have been much greater in the Norfolk decoys. Stevenson's Birds of Norfolk vol 3 page 174, reveals that in 1864 at the Ranworth decoy were taken, 877 mallard,70 teal,3 shovler's,1 pintail,1 tufted duck,one gooseander and only 8 wigeon.

The flesh of the wigeon was said to be inferior to that of the mallard or teal but according to Butler, 1896, " I have not found that to be the case,and prefer a Humber fed wigeon to any other species, of course much depends on the cook and the sauce,these being up to the mark! " 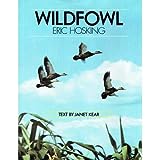 The nest of this species is usually well concealed and close to the water, built up of grasses and dead plants. The nest tends to be cup-shaped and relatively deep. The eggs usually 8-9 form the clutch are a creamy white colour. When the female commences incubation the male retires into seclusion. The female will incubate the eggs for around 25 days and as soon as the young ducklings make their way into the world they take to the water.

According to Naumann, " The duck sits from 24-25 days. For about half this period she is attended to by the Drake, who roosts during the day not far from the nest,and faithfully accompanies his mate every evening to the feeding grounds, but before the eggs are hatched,either his ardour has cooled or important business calls him elsewhere,and he leaves her to bring up her brood alone,whilst he retires to the marshes to undergo his first moult.

As soon as the young are able to fly the female leaves them to fend for themselves while she undergoes her one annual and complete moult in the most secluded locality she can find."

The young birds keep among the reeds and rushes.The young of the first year resemble the females the males taking up to two years before they acquire their full adult plumage.