Zoos of the United Arab Emirates

Peter is an independent international zoo consultant, critic and writer with over 50 years work within zoos.

Zoos of the UAE

The United Arab Emirates is made up of the seven former trucial states now united under one flag. They vary both in size and in wealth.

There has always been an interest in wildlife in the Arab world and the UAE is no different. Primarily this centres around the falcon and its prey species but the love and appreciation of other animals is quite obvious even to the casual visitor.

Sadly much of this interest is misguided and there are numerous secret private collections holding big cats, Orangutans and more. Where money is of no matter then anything can be purchased by those who desire. These places are supplied by people who take advantage of the buyers by lies and extraction of large amounts of cash. Wild Cheetah populations are under threat by the actions of these unscrupulous uncaring people.There are no legally held Orangutans in the UAE.

I cast no judgement on the staff working in any of these collections because these are Zoo Keepers and in general Zoo Keepers Care.

Happily there are other private collections which have a genuine interest in conservation and all it entails. When I first worked in the Emirates in the late 1970s the establishment in which I worked had around seven Arabian Oryx which we bred up in goodly numbers. Elsewhere in the UAE I visited or was to some degree was involved with private collections which had around another hundred animals between them. Unseen to the general world the survival of the Oryx was in good hands. In 2011 there were 4129 living Arabian Oryx recorded in the United Arab Emirates. I was instrumental in re-locating some of the first of these animals to Sir Bani Yas and Abu Al Abyad.

It was on one such trip that I had my one and only 'one to one' meeting with Shaikh Zâyed bin Sulṭân Âl Nahyân the ruler and founding father of the UAE. I had met him several times before but always with his bodyguards or family. This was different. I will remember meeting always. He was different. He was a great man.

Elsewhere in the Arabian Gulf the 'animal scene' was probably the same. I recollect that it was in 1965 (two years before I started my zoo career) that I was first nearly impaled by an Arabian Oryx. This in a private garden on the outskirts of Kuwait City.

My interest in animals was sparked in 1951 by regular visits to 'The Nursery' in Ahmadi, Kuwait where there was a collection of well cared for gazelles and other animals. My first visit to the 'old' Kuwait Zoo in 1956 left me with altogether different feelings.

Some of these collections will claim that they are not a zoo but 'something else'. It means nothing. If they are wild animals being held captive then it IS a zoo. It matters little if they are held in a thousand acres, if there is a fence around it and they are being provided some food and water then it IS a zoo.

Whether is a GOOD zoo or a DYSFUNCTIONAL ZOO is an altogether different matter. 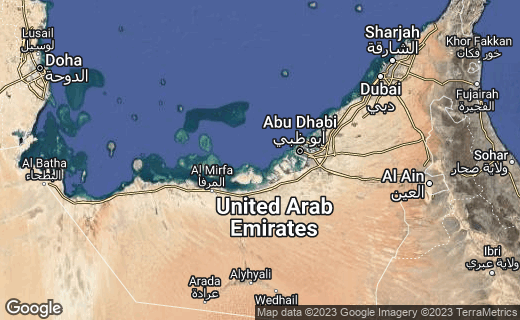 The list of animal collections below is not comprehensive. There are others of which I am aware but don't have enough details.I make no distinction of what is good, bad or indifferent.

Please do not contact me for further information on any of these. Private means Private.

The Management of Nature Conservation

(Under Construction) Close to the Mushrif Reserve and Dubai Safari.

Private - Al Dhaid, Sharjah - Will open to the public shortly as one of the Worlds Biggest Safari Parks.

Where Do The UAE Zoos Go From Here?

There were plans to set up the Arabian Association of Zoos and Aquariums. Several UAE Zoos attended the early meetings. Further meetings were attended by staff from other Middle Eastern zoos. Unfortunately the set up foundered. I am unaware of the present status.

This is no easy task for the UAE let alone giving consideration to the rest of Arabia. Opinions on what is 'good' or 'bad' differ so widely. There are those who believe that Playing with Lions and Tigers or breeding or keeping mutations and hybrids is a good thing....when it most definitely isn't.

The easy way out would to base the articles of the Association on something similar which exists elsewhere. However there are bad Associations in the same way there are bad zoos. It must go further than that. I believe that the implementation of Zoo Legislation needs to be put in place before or in tandem with the Association. This way the wheat can be sorted from the chaff right at the start. I have great faith that the UAE will move this way eventually so sooner rather than later would be a good move.

Other Articles on Zoos and Zoo Related Subjects