When You Have to Put a Dog Down Because of Aggression

Losing our Beloved Dog to Canine Rage Syndrome. Here is Our Story:

I miss our dog. Well, technically, he was my son's dog but I just loved that dog so much. This dog was truly special. He was smart. He was obedient. He fit the definition of 'love puppy'. He loved to love and to be loved by us all.

So, if he was so wonderful, why did we make the agonizing decision to put him down at only three years of age? Unfortunately, a very small percentage of the time, we had no control over him. It was like a switch went off in his brain and we was in attack mode. No amount of love, training or intervention seemed to change his sickness and, yes, dogs that suffer from this type of aggression are sick.

That is why this has taken me six months to write about our loss. I still get tears in my eyes when I think of him. I know others who have gone through this same situation and I hope that by sharing this page, you'll find some help and solace in it as well.

Fourteen Hours After Putting Our Sammy Down

Thankfully, the night before we made the decision to put our pup down, I found a forum for those who have lost their pets. I found such solace in reading the stories of other families who had lost their dogs to this same reason. Of course, the loss was quite painful and in my grief, I reached out. Here is my initial post:

"I apologize in advance if this is a bit incoherent because this hurts so much and I cannot just stop crying.

I feel such guilt and I am brokenhearted.

Just over 14 hours ago we had to put our beloved three year old American Staffordshire Terrier down due to aggression.

Let me just say, 99.9% of the time, this was the most loving dog EVER! He was so smart. He'd been through obedience training and excelled. Although he was my son's dog, I was probably more attached to him than any dog ever and that is saying something because I love dogs.

However, the other 0.1% of the time, he worried us a lot. It was like something would snap off in his brain and we'd have no control. We are so blessed he did not do more damage than he did but some dogs do that and we tried not to let him out ever after dark because of all the nocturnal critters in our area. Still, he did catch and kill an assortment of small critters (i.e. squirrels, birds, snakes, etc...). He's had a few instances of being aggressive and, the last straw was when he escaped our backyard two nights ago and bit a small child just playing down the road. The child did nothing to provoke it and his parents were so gracious. It was bad but we know it could have been much, much worse for that poor family. For three years we had been so careful with him but we knew another escape could happen one day and there are just to many precious young children in our neighborhood. As much as we loved our Sam dog, we could not risk the life of a child. We also know he would likely have been quarantined by animal services and our dog would not have done well at all. He was so nervous with others and just lived his life for us, his family. Quarantine would not have changed the outcome so we wanted to do this as humanely as possible, with us at his side.

So while I know we did what we had to do, it hurts so badly. That dog trusted me so much. I hurt so much for our son who is fourteen. He picked him out from the pound just three years ago and he loved his dog. His dog ADORED him.

We took him to our vet because we thought it would be easier than if Animal Services took him away and put him down. Our vet had to muzzle him though because he had bitten someone. He shook so badly. My husband held him and I just petted him during the last moments but he was so frightened and shaking so badly. I feel so guilty. I just want him back. I'll never forget his eyes looking at me above the muzzle expecting me to help him and I didn't. Oh my goodness, this hurts so badly. I don't even know how to help our son right now because I cannot even keep it together.

I found this site 24 hours ago when researching what to do when you have an aggressive dog and found other posts from women going through the same thing. I cried my way through their stories but knew that they had no choice and neither than we but I just need somebody to tell me this will get easier. We've put down two dogs in the last four years. Both were fifteen and it had to be done. That hurt but they were sick and hurting so I didn't feel this intense guilt. I know this has to get easier. I just don't see how though. At some point, these tears have to stop, right?"

After discussing our options (or lack of) with our vet, I found that Rage Syndrome is a very real disorder in some dogs. He actually had a golden retriever that had to be put down for this very reason. Hearing that made me feel a little better. Our vet is known for going out of his way to save every creature brought in to his clinic.

What is Rage Syndrome?

Fortunately Rage Syndrome is fairly uncommon. However, that doesn't offer much solace to those of us who have lost a pet due to this disease. A pet struggling with this disease, can suddenly without warning, turn in an uncontrollable beast, snapping and growling. No amount of training will get this pet to a point where they will snap out of it. Often, you may notice the dog's eyes just glaze over as if they are someplace else. This is what we would see with our dog. While it didn't happen a lot, it did happen enough to scare us.

If you would like more information on true Rage Syndrome:

"Rage Syndrome in Dogs: Idiopathic aggression is (thankfully) quite rare, but also quite dangerous."

Have you had to deal with an aggressive pet?

"I think God will have prepared everything for our perfect happiness. If it takes my dog being there [in Heaven], I believe he'll be there." 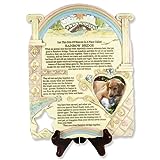 As a serious dog lover, the guilt I felt putting our beloved Sammy down was so overwhelming. I was drowning in it.

You think to yourself, "What if?" Here were my common 'What ifs' before we made our final decision:

What if we got him more training?

What if we found better drugs for him? Do they make Xanax for dogs?

What if we just kept him chained in the yard so he could not escape?

What if we kept a basket muzzle on him at all times except to eat and drink?

What if we found him another home?

Well, we did extensive training with him. Even his trainer thought he had some mental imbalance because of his aggression toward others. We tried some calming medications for him. They kept him calmer but, on one walk, he lunged at a little girl. Thankfully we used a prong collar to control him. Chaining him in the yard as well as the muzzle just would have been cruel. He was a member of the family and that was no way to live. And, finally, we were told that even if we found him a new home, if he bit somebody, we'd still be liable.

I believe strongly in Heaven. I do believe that our pets end up in Heaven. I know I'll see our Sammy again someday. Really, for him, it was the kindest thing we could do. He had a sickness and while it didn't happen a lot, it happened enough that it scared us. We just could not take the chance of him harming anybody.

Despite all this, I won't kid you, I still feel guilt. I still shed some tears when I really take time to remember him. The guilt does ease though and I do know we made the right decision.

Part of our Healing

Although she is not a replacement, we thought it important that our son get another dog soon after Sammy's death.

As with all our pups, we found this little beauty at the pound.

She has helped immensely in healing the pain caused by Sammy's loss. Like I said, she could never replace such a special dog but she has earned a spot in our hearts nonetheless.

Are you going through this now? I'd love to hear from you. I know, when I went through it, just talking to others who understood helped immensely. I read story after story of other families who had to put their dogs down for the same reason. Just knowing you are not alone can help so much. Kind and supportive comments only please :)

Would love to hear from you