From the Bizarre to the Strange and Complex

From strange and complex forms of communication to bizarre feeding behaviors and interesting mating and reproductive strategies, animal behavior is a subject that has captured the interests of scientists and nonscientists alike for centuries.

Why do bees perform an intricate dance when they find food? What causes some frogs to swallow their own eggs? Why do primates groom each other? The curiosities are endless and scientists are rethinking what they know about animal behavior, even in its most basic forms.

Gathered here on this page are just a few rather interesting examples of strange and unusual animal behavior that are sure to capture your imagination and possibly spark your desire to learn more about some of the millions of animals we share this earth with.

Flatworms engage in a battle like no other to secure a mate. All flatworms are hermaphrodites meaning they have both male and female sexual organs. All flatworms therefore can inseminate and be inseminated. Some species of flatworms have two penises and one or more genital pores needed for receiving unique two tailed sperm which is delivered during copulation.

When certain species of marine flatworms meet, they engage in what is known as penis fencing to determine who will be the mom and who will be the dad. Both worms try to pierce the skin of the other using one of their two penises. This battle can last for hours and even harm the worms in the process. The first worm to pierce the other becomes the male and the one pierced becomes the female. Both worms would prefer to be the male as the one that assumes the female role has the more difficult and energy expending task of raising the young and caring for the developing eggs.

Flatworms lack a body cavity with organs and body systems, instead they have specialized cells that perform various functions. They get their oxygen by absorbing it through diffusion. They can dehydrate quickly and therefore are often found in moist environments. Many species of flatworms are parasites, including the tapeworm, which can be ingested by consuming undercooked meats.

photo and more interesting information on flatworms can be found at: Scienceray.com

The Shape of Life: The First Hunter/Explosion of Life
Part of a stunning DVD series on animal life, this episode, episode 3, uses innovative camera techniques to capture rarely seen creatures and breathtaking computer animation to reveal stunning detail. It follows unlikely predator, the bizarre and vibrant flatworm, whose hunting and sexual exploits forever altered the shape of life and shows the viewer a penis fencing battle not to be forgotten.
Buy Now

Starfish are well known for their powers of regeneration. An arm can break off as a defensive tactic and grow into a complete new animal. In some species, an arm will pull off purposefully to grow a new animal, serving as a form of asexual reproduction.

This behavior is certainly fascinating, yet even more fascinating is the many different ways different species of starfish feed. Most starfish are carnivores and feed on sponges, mollusks, bryozoans and ascidians. In species that eat mollusks,the starfish will slowly creep over its hapless victim, say an innocent clam. Its hundreds of tiny tube feet then create a suction cup vice like grip which opens the clam and exposes the soft muscular foot inside. Having no mouth parts to help it eat, it uses its stomach. The starfish expels its stomach into the prey, thus covering the exposed mollusk with its digestive organs. Digestive juices are then excreted and the tissues of the prey are dissolved and literally eaten alive. The digested food together with the stomach is then sucked back in to the starfish.

The crown of thorns starfish is one of the largest and most unique starfish species. It can have between 10 - 25 huge arms that all contain venomous spines. Feeding on coral polyps, this menace has destroyed many coral reefs worldwide as its natural predator, the giant triton, has been hunted nearly to extinction for it beautiful shell. The crown of thorns has interesting feeding behavior that scientists can't clearly explain. At the same time every evening they congregate together, hundreds of them arrive right on time at the designated meeting spot and then on cue of some mysterious signal, they spread out in a massive feeding frenzy, desecrating hundreds of coral colonies in a night.

The photo seen here comes from a very interesting blog: echinoblog where you can read more about different ways starfish feed and see some more interesting photos.

The male anglerfish is a parasite gone extreme, he bites into the female and releases an enzyme which digests the skin of his mouth and her body, fusing the pair. The male then atrophies into nothing more than a pair of gonads that release sperm in response to hormones in the female's bloodstream indicating egg release. For more on the angler fish see Really Weird Sea Creatures

Frogs and toads are mostly carnivorous eating mainly live animals such as small insects. Usually frogs and toads actively hunt for their prey. Some species, like Ceratophrys ornata, shown here, lie in wait instead.

Camouflaged, this large ornate frog with a voracious appetite hides. Slowly it lifts its hind leg above and behind its head and wiggles its toes. Its toes are yellow, long and thing and wiggle like worms. An unsuspecting tasty snack such as a large insect or a small lizard wanders closer and BAM! Ceratophrys opens its large mouth and engulfs it whole.

Ceratophrys ornata is fearless and if threatened by a larger animal will jump towards their attacker, sometimes delivering a painful bite. They don't have teeth but have several odontoid projections along their bottom and top jaw.

Photo and more information on this frog species can be found at Winkipedia.org

The most durable creatures on earth are Tardigrades, eight-legged animals that are nicknamed water bears. They can fully dehydrate, survive being thrown into boiling water or alcohol, survive being immersed in liquid helium, just 1C above absolute zero and withstand water pressure six times the pressure of sea-water. 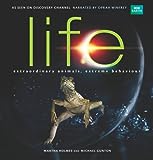 The rumor you have heard that cockroaches can live without their head for weeks is actually true. Also true is that the head alone can survive without the body. Just how exactly does it do this?

Cockroaches do not have blood and blood pressure like humans do. Should a human or other mammal become decapitated, blood loss and a drop in blood pressure create a situation in which you would bleed to death, not to mention be unable to receive the oxygen and vital nutrients the organs need to survive. Not so with the roach. After their head is cut off, their open circulatory system (with much less pressure and no huge network of blood vessels) allows their neck to simply seal off by clotting.

In addition, roaches breathe through spiracles, or tiny holes. Their brain does not control this breathing and their blood does not carry oxygen throughout the body. The spiracles pipe air directly to the tissues. So while all breathing would cease in a human or mammal, breathing does not cease without the head of a roach.

Finally, since cockroaches are cold blooded animals, they can survive with very little food. The headless roach can go for weeks as long as it conserves energy and does not get eaten. Of course, eventually it will end up dieing of starvation or perhaps a mold or bacterial infection.

Having clumps of nerves called ganglia distributed within each body segment allows the headless roach to move, stand, and react to touch all without needing a brain.

And, as mentioned earlier, it is not just the body that can survive decapitation; the head can too, but only for several hours. In laboratory experiments, when a roach head was given nutrients and refrigerated it lasted even longer. The head cannot survive as long as the body can because the brain needs the sensory input from the body.

The paradise tree snake (Chrysopelea species) can actually fly. Once it leaps into the air, it changes its shape to that of a biplane and undulates its body. It can achieve a glide angle of just 13 per cent to the horizontal (90 per cent constituting free fall) and cover distances of 20 metres.

Planet Earth: The Complete BBC Series
Planet Earth is quite simply the greatest nature/wildlife series ever produced. From mountains to caves to deserts, shallow seas and more, each episode magnificently illustrates the most astonishing sights and sounds in nature. See inccredible footage of some of the strangest and most unique animals on Earth and some of the most captivating environments on Earth..
Buy Now

Spiders from the family Uloboridae have lost their fangs, evolving instead different ways of killing and consuming their prey.

After a hapless moth, beetle or other insect is unlucky enough to get caught, a small uloborid spider will weave more than 140 meters of silk to surround and engulf its innocent victim. It binds the silk around its prey so tightly that this vice like compression causes the legs and exoskeleton crush, its limbs buckle, and its compound eyes implode.

In sea horses, the males become pregnant. Their mating involves the female inserting her oviduct into the male's brooding pouch, the eggs are fertilized in the males pouch and he is pregnant for several weeks before giving birth to their brood.

Thanks For Visiting - All Comments Are Appreciated!