All About Betta Diseases

Inever took this subject seriously until two of my beloved bettas acquired some of the diseases themselves. In fact, I never imagined I'm going to write something about betta diseases since there are tons of information out there on the subject. I've read a number of sites that talk about betta diseases and how to treat them but I never thought my own bettas would be plagued with diseases caused by bacteria and parasites. Anyway, what's happened has happened and I don't think there's one betta enthusiast that's exempted from such experience. Fortunately, my bettas are recovering well now and I'm putting up this lens as a way of sharing my own experience with betta diseases and how I dealt with them.

All About Betta Diseases

Whether you like it or not, your pet betta will get sick at some point of its life, so it would be best if you are prepared. I’m just lucky enough to have read some betta sites in the past and get help from some of betta enthusiast myself, because if not, all my pets would have been in betta heaven now (If there’s such a place). And you as the reader are luckier because you get to read this lens that will help you prepare so that in case one of your bettas get sick in the future, you will know just what to do to help it.

There are several causes of betta diseases, but mostly, the diseases come from unclean water. Stress is also a huge factor that contribute to betta disease so if you don’t want your betta to get sick at all, you have to learn how to keep it happy. It’s easy to find out whether your betta is sick or not. A simple visual inspection is all you need to monitor your betta’s health. Every day during feeding time, take a few minutes to examine your betta very closely and look for visible signs of parasites or for a change in his behavior. If he’s not acting normally than usual, chances are, he’s either depressed (which can be a good thing when compared to having disease) or is afflicted with some kind of disease.

Here is a list of the signs and symptoms of a sick betta:

2. Stays at the bottom of the tank and is not active as usual.

3. Darts and jerks every time he swims as if he’s having an itch.

5. Fins are clamped or closed tightly.

7. One or both eyes are swollen.

8. Body is covered with white spots.

If you notice any of these signs in your betta, then he’s one hundred percent sick.

Ick is a very common disease among freshwater fish. It is characterized by white dots all over the body of your betta. If your betta has ick, he’ll probably stop eating and his fins will look clamped. Ick is caused by a parasite and can be very itchy so don’t be surprised if you see your betta darting around and trying to scratch its body against any object inside his tank.

Just like Ick, velvet is also caused by a parasite. To find out whether your betta has velvet or not, turn off the lights and direct a flashlight into his body. If he is covered without gold-like mist, then he has velvet. He’ll also probably going to dart around and try to scratch his body against objects inside the tank. He may stop eating and will have clamped fins.

It’s easy to spot fin rot because it slowly eats away your bettas fins so that it becomes shorter and uglier. Fin rot is caused mainly by dirty water. Sometimes, fin rot can be so severe that it also affects the body of the fish, eat it until it dies. If you treat your betta immediately, he’ll have a hundred percent chance to grow his fins back but they won’t be as good as before.

(On the right is a photo of my betta, Squidoo, a week after he acquired fin rot. If you notice, 4 of the rays of the lower part of his caudal fins have broken off. That's the result of fin rot. Thankfully, the tissues are starting to grow back now.)

Anchor worms are external parasites that attach themselves to the betta's body. They're transparent so the only way to see them is by looking very closely. A betta with anchor worm may not lose its appetite but it will surely try to scratch itself against anything just to get rid of the itch caused by the parasite. I will discuss how to treat bettas with anchor worm below in detail.

The disease is so-called because it causes either of the eyes of your betta to pop. Pop eye is caused by bacterial infection due to dirty water. If your betta has popeye, there’s a huge possibility that he’ll lose an eye or both but there’s also a chance for him to recover from it completely.

This is a very ugly disease because bacteria can eat either the skin of the fish or its internal organs. This is caused by dirty water and is very contagious. If your betta acquires it, you will notice some visible changes in him like red patches, open sores, and even holes in the body especially when the infection is in the advanced stage.

This is considered a cancer disease among bettas. You'll easily diagnose a betta with dropsy because its scales are raised when you look at him from the top. Unfortunately, there is no known cure for dropsy.

What To Do If Your Betta Catches Any Of The Diseases

Most of the diseases that afflict bettas are a result of poor water condition. Bacteria, fungi, and parasites can easily multiply if you don’t perform regular water changes and keep your betta tank clean. Therefore, the first step into treating a betta with disease is to remove it from its tank and transfer it to a hospital tank if you have one. If you don’t have a hospital tank for your bettas, simply perform a full water change, remove all the accessories, and treat him accordingly.

I found a cool site that discusses betta diseases and how to treat them in detail. It’s not my site and I’m not promoting it but I recommend it to you because it’s actually the site that inspired me to keep bettas as pets. As for this lens, I’m only going to share in detail how I treated my betta that acquired fin rot and some anchor worms.

Fungus Eliminator by Jungle is an effective treatment for fungal infections. 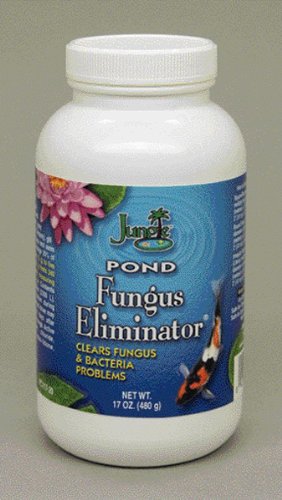 How I Treated My Betta With Fin Rot And Anchor Worms

When I found out that my new Crowntail Betta named Squidoo acquired fin rot, I panicked. He was okay in the morning but when I checked him in the afternoon, I noticed some moss-like object hanging in his caudal fin. When I looked closely, I realized it was fin rot! I quickly scooped him out of his tank using a plastic airplane cup and added one drop of methylene blue into his water – in the cup. I took his old fish tank and cleaned it thoroughly, removing the pebbles and the live plant. In short, I left his tank bare. This way I can observe him better for the next few days. He acquired the fin rot from the 5 gallon planted tank I placed him just 2 days earlier so I decided to move him into a smaller tank where I can observe him properly. The tank is quite small, about 1 gallon. I made sure the tank was clean before I filled it with water. I added Â½ tablespoon of rock salt into the water and 1 drop of methylene blue. I then gently poured him into the tank didn’t feed him anything. For the following days, I performed FULL water changes every 2-3 days, and fed him once a day to keep the ammonia buildup to a minimum.

At first, I thought his only problem was fin rot, but when I noticed that he kept on jerking and darting around when he swims, I figured out he has some sort of external parasite. I was right because when I looked closely, I saw an anchor worm sticking on his left pectoral fin. Treating anchor worms is kind of tricky, because if you really want to get rid of the parasite quickly, you have to perform some kind of a “betta surgery”. Anchor worms stick their heads deep into the scales of the betta so when you remove them, they’ll leave a tiny wound in the betta’s skin. To begin the operation, I scooped my betta Squidoo from the tank and poured some of the water so that he’ll have very little room to move and make things easier for me. Luckily enough, he didn’t move much when I was attempting to pull the anchor worm from his skin, as if he knew I was trying to cure him. It didn’t take me more than five minutes to remove the parasite. It left a spot of wound in my betta but since I treated his tank with salt and methylene blue, he recovered from it almost instantly.

He seemed to be okay for the next few days; his fins were starting to grow again and he’s still active as usual. However, when I looked at him again one night, I noticed another anchor worm sticking from his caudal fin. I performed the operation again and got rid of the parasite but that wasn’t the end of it because 3 days later, a found another one, this time on his anal fin. The third operation was the most difficult because he kept on struggling, and when I finally got rid of the problem and released him back to his tank, he won’t flare anymore and looked like he was in shock. Luckily enough, he snapped out of it a few hours later and now I don’t see any sign of the anchor worms anymore. He’s still in his hospital tank because I plan on keeping him there for two more weeks before putting him back to his larger tank.

If you notice, I didn’t use any medicine except for methylene blue and rock salt. That’s because I believe that the key to treating betta diseases is CLEAN WATER. If you want faster results, go ahead and use betta medicine. But in case you are not prepared (like me!), performing water changes regularly and adding rock salt and methylene blue might just do the trick.

The Tools I Used For My "Betta Surgery"

I used a a pair of sanitized tweezer to pull the anchor worm from my betta's skin while he's inside the plastic airplane cup.

Drop Your Comments Here - What Do You Think About This Lens?