Blue and Gold Macaws and African Grey Parrots: Can They Really Talk?

We all know parrots can "parrot," but can they REALLY communicate with humans?

Parrots, like the Blue and Gold Macaw to the left, and the African Grey Parrot below, are beautiful, social, and highly intelligent birds. Parrots are often trained by their owners to do tricks and are also well known for being able to talk. But are they really communicating, or just mimicking our words?

Read on. You may be surprised at what you hear!

This page includes information about Blue and Gold Macaws, African Grey Parrots, and the ability of parrots to actually communicate, in words, with humans.

This is a Blue And Yellow Macaw. Blue and Yellow Macaws have blue wings and backs, and yellow feathers on their bellies. There is a touch of green on their foreheads. Their faces, which are mostly bare skin, are white, with small black feathers creating lines near their eyes.

An interesting fact about Blue and Yellow Macaws is that when they get excited, they blush and their faces turn pink!

Check out their beaks! - Think those beaks can talk?

Macaws are members of the parrot family. All parrots have curved beaks. Macaws use their curved beaks not only for cracking open nutshells, but also for climbing and hanging in trees!

Where Do Blue and Gold Macaws Live?

Are Blue and Gold Macaws endangered?

Blue and Gold Macaws can be found in South America, Central America, and the southern tip of Florida....as well as in many zoos, pet stores, and homes. Although they are not at risk as much as many other types of macaws, Blue and Gold Macaws are on the endangered list in Trinidad. Part of the reason for the decline in macaws is the pet trade.

The Blue and Gold Macaw pictured here lives at Ardastra Zoo and Gardens in Nassau. He not only greets visitors as they enter the zoo, he also poses for pictures with them as they leave!

I can't help but wonder though. Is he sleeping on the job?

A Close Encounter With A Blue And Yellow Macaw! - in the Bahamas

During the summer of 09, my family made a trip to the Bahamas. One of the exciting things we did while we were there was visit the Ardastra Zoo in Nassau. As we entered the zoo, we were greeted by a Blue and Gold Macaw sitting on a perch. (You saw his photo in the previous section.) As we prepared to leave, a zoo employee stopped us and asked us if we'd like to pose with his birds. Here you can see my daughter, Jessica, being kissed by a beautiful white bird, while the zoo's Blue and Gold Macaw perched on a zoo hat on her head!

Who Can Solve the Puzzle Faster? - A Blue and Gold Macaw? Or a human?

Think you could beat the bird's time in solving the puzzle? Others have tried!

Listen to what this lady says about parrots and language - Have you ever heard a bird sing (in English)? If not, you're in for a real treat!

While this isn't a Blue and Gold Macaw in this short video, it is a nice example of a parrot speaking in English. Oh, did I saw speaking? I meant singing!

Do all Blue and Gold Macaws do is "parrot?"

Or are parrots capable of something more?

If you listened to the youtube above, you'll have heard one opinion about parrots and language. "All they are capable of doing is mimicking the sounds they hear. They don't really know what they are saying."

But in recent years, some people are disagreeing. Keep reading. In the next section, we hear a very different opinion!

This Blue and Gold Macaw's mom claims her birds know what they're saying.

Ray is a Blue and Green Macaw. His owner wrote: "Ray knows what he is saying and how to get what he wants by saying certain things - he only asks for potatoes when I am cooking potatoes. My Gray regularly says "I wanna come out" and then rattles the locks, or "How about some water?" when his water bottle is empty. They are extremely smart!"

Here's Ray in Action. - This video is long, so if you're short on time you might not want to watch the whole thing, but at least take a quick listen!

We can train a dog to "sit" or "beg" or "roll over" and he'll understand what we want him to do. It seems to me that "Ray" in the video above is trained in much the same way. He knows which response goes with which question - not that he always responds appropriately. He did remind me a bit of a human toddler who's mom is trying to get him to show off. Those of you with kids probably know what I"m taking about! The kid does something so cute when no one but you are watching, but let Grandma come over and suddenly your toddler acts clueless as to how to do or say it again!

Okay, most human toddlers don't do it to that extreme, nor does Ray in the video. Ray did come up with the correct response quite a few times! He demonstrated that he was doing more than just mouthing off words at random. But is that communicating any more than rolling over is when a human tells their dog to roll over? It's a form of communication. Sure. The human is communicating with the animal, and the animal is responding. But could there be anything more between humans and their feather, scale, or fur covered friends? Could the conversation ever become more of a two way affair?

Meet Arielle: A Blue and Gold Macaw - An Example Of Interspecies Communication?

Arielle is a 19 year old Blue and Yellow Macaw. Her owner, Michael Dalton, has been studying her language abilities for 19 years, and is convinced that Arielle is able to communicate her thoughts by speaking. She isn't just parroting his sentences back to him. According to Michael Dalton, she's truly communicating. She's able to put words together in new sentences she's never heard before. She uses expressions at appropriate times to communicate whatever she'd like.

Arielle has a vocabulary of close to 6000 items and speaks over 4000 expressions. Michael Dalton says Arielle's development of language has been much like that of a young child's, and that she is even able to rhyme, make jokes, use pronouns correctly, know which form of the verb she needs to match the subject ("I am" vs "You are.") and express her emotions, thoughts and questions.

Here are a few examples: (More examples can be found on Dalton's website!)

A Book on Teaching Your Bird to Talk. 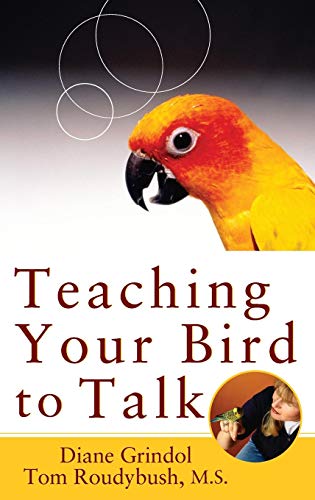 Alex was an African Grey Parrot. He was taught abou 150 words by researcher Dr. Irene Pepperberg. Alex wasn't just taught how to speak the words; he was taught their meaning. He also learned to identify colors and shapes and how to count up to 6 objects. He.was beginning to learn to read letter sounds, prior to his unexpected death in 2007.

Like Arielle, Alex was able to put words together to express new thoughts. One day, for example, he saw a banana and wanted some of it, but he didn't know the word for banana. His solution was to say, "Alex want yellow food."

Alex truly had a lot of personality, and he knew what he wanted! Sometimes Alex would get tired or bored and begin making mischief (purposely giving the wrong answers). If Dr. Pepperberg got annoyed at Alex, Alex would say, "I'm sorry" and would usually then cooperate. When he got tired of working, he'd say, "Wanna go back" (to his cage). Sometimes he'd request to be taken somewhere else. If he was taken there, he'd rest quietly. If he was taken somewhere else instead, he'd protest! He also would request specific foods, and be agitated if he was given a different food instead, possibly even throwing it at the researcher before repeating his original request!

This is Dr. Irene Pepperberg's book about Alex.

Videos of Alex, the Talking Parrot and Dr. Pepperberg - Parrot Intelligence and Communication

Another very interesting video that discusses the communication of parrots can be found at Parrot Intelligence: Dr. Pepperberg with African Greys Griffin, Alex, and Einstein.

An Avian Expert Voices Her View About Alex and Arielle, and Their Abilities to Communicate With Humans - My favorite Link On This Page!

There's a short video, as well as an article, on this link! They're both worth checking out!

Think Some Birds Can Learn How To REALLY Communicate With Us?

I'm now convinced. How about you?

I'd love to hear your thoughts, views, and experiences!!

Can Parrots Really Talk? - Or are they just mimicking us?

What do you think? Do they understand what they are saying? Can they put words together to express thoughts?