A Safe Place for Cats to Exercise

You might call it a cat enclosure, a cat exercise area, even a cat run, but my aunt calls hers the Kitty Pen. Whatever the name, it provides a safe outdoor area for your cat.

This isn't something you can buy in a box, you need to build one. The size and cost depends on how many cats you have and how elaborate you want it to be. It's cheap to do if you're good at scavenging lumber and have some skill with a hammer and saw.

When she saw a picture of an outdoor cat pen last September, my aunt knew she had to have one. She planned and saved up to have one built by a local carpenter. Now she finds it fun, not just for the cats, but also a place for her to sit out with her coffee in the morning or reading later in the day. She keeps the cats company, they get to climb and frolic and there are no worries about them dashing into the street where a car might hit them.

(All the photos on this page are by my aunt, CJ Garriott)

Benefits of Having a Kitty Pen

As you see in this photo, your cat likes to sharpen its claws. Isn't it much better to have this happen on a piece of wood rather than on your sofa!

The cats get fresh air and moves around stretching. This gets their energy level up after long cat naps.

Since they access the cat enclosure through a cat door, it's available to them at all times of the day. They don't have to wait for you to come home from work or from shopping to let them outside.

Stray cats and wild animals can't get into the house via the cat door since the kitty pen encloses it.

You don't have to worry about dogs attacking your cats while they are outside as the enclosure protects the.

You don't have to worry about them being killed by a passing car in the street.

Cats possess strong hunting instincts and when allowed to roam, they catch small animals like chipmunks and birds.

I like that it makes me and my cats good neighbors. No digging in the neighbor's flower beds.

In her previous home, my aunt had a cat door but no outside cat enclosure. A stray cat kept coming into the house to eat the cat food. Her cats did not like this intruder who kept returning and upsetting them.

It turned out the stray cat was pregnant and ended up giving birth to the kittens in the house. My aunt had quite a job finding homes for mamma cat and the kittens. She fell in love with two of them and kept them.

You Can Order a Cat Door from Amazon - There are many choices. Here's an example. 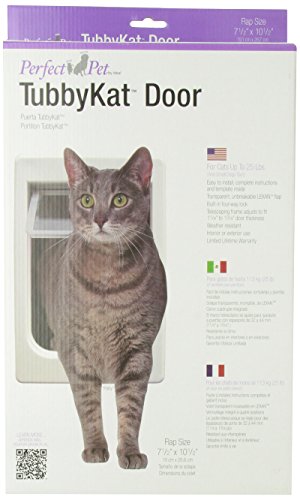 Perfect Pet Tubby Kat Cat Pet Door with 4 Way Lock, 7.5" x 10.5" Unbreakable LEXAN Flap
This one is particularly for a large cat. If you have a Maine Coon Cat, you need to select a large door. As you can see, this is the kind of door my aunt had installed at her house. She has been pleased with it.
Buy Now

Framing up the Cat Pen

You'll want a sturdy framework. For this one, the slanting part attaches to the line of the roof by the back door.

This photo shows the frame of the cat enclosure before the wire fencing is added.

For a future improvement, she wants to add some roofing over the part closest to the house.

Add a Door from the Cat Enclosure into the Yard

One of the cats inspects the screen door that was added to the kitty pen.

A person can enter the screened area from the house (note step on the right), then go through the screen door out to the yard.

The cats quickly learned they could push open the screen door, so keep it latched with a hook. They also pushed through the light screening on the door, so the heavier mesh used for the enclosure was added on the screen door as well.

When cats have been kept indoors, they may be fearful at first in the yard. Let them explore in short, tentative outings this new space. Before long they have no hesitation in entering their private playground.

Note that the wire is attached to the outside of the boards so sharp ends won't harm the cats.

Be Resourceful - And Save Money

My aunt wanted something for the cat to climb on, such as driftwood or a tree branch. It's hard to find driftwood in Kansas, but there was a fallen branch in my sister's yard that looked just right.

Unfortunately it was too big to go into the car. They solved that problem by transporting it outside the car.

Cover the Top - for safety

Don't leave the top open as cats are remarkable climbers and jumpers. The first time Graycie went up there, she was following a bug that was crawling on top of the door frame. Now she just goes up there now and then to look around.

Add Enticing Toys: My aunt's neighbor, Lola, helped install cat toys. These are strings tied to the top here and there, with balls or toys tied to the bottom hanging down. They blow in the wind, and the kittens play endlessly with them.

Add a comfortable place for humans: The lounge gives a person space to be with the cats in the enclosure and to enjoy their antics. Of course the lounge is enticing place for a cat nap too.

Let some plants grow inside: I recommend a low ground cover so you needn't bother trimming. Cats will nibble on some grass and plants. They can relax on the grass to cool off too. For Limited Space Such as a Balcony - Small Cat Enclosure

It is possible to buy a ready to use outdoor cat enclosure. As you can see this is pretty small but might work for someone having only a tiny patio or a balcony. You don't want to risk your cat falling or trying to leap from a balcony.

Kritter Kondo Deluxe Outdoor Pet Enclosure, Green/Green, 2' x 2.5' x 6
I have a friend who has an open patio where she likes to sit each afternoon while reading and having her tea. Her cats would sit inside with their faces pressed against the screen wishing that they could be outside with her. Once she got this enclosure, it worked great. She would pick up the cat and place it inside it. They have the feeling of being outdoors and near their owner without the risk of them wandering into the street or getting stuck in a tree.
Buy Now

I found some great examples of cat pens that other people created. Flickr Search: cat enclosure is a good place to get inspiration. Look through the photos and decide what feature you would like for your own enclosure.

I found a good step-by-step instruction for constructing a cat run on the eHow site. It is called: How to Build an Easy Cat Enclosure | eHow

Since cats love the outdoors, some people allow their pet to roam freely in the yard. That's just not a good idea--for safety of your cat. It also endangers birds and other small wildlife in the neighborhood. You don't want your cat to be a pest for neighbors who might be allergic or annoyed if the cat uses their flowerbed for a litter box or makes cute cat paw prints across the hood of their car.

A Cat Pen in an RV Park