The Copperhead is one of the six venomous or poisonous snakes that inhabit Louisiana. Copperheads are cousins of the Cottonmouth and belong to the pit viper family of reptiles. This colorful snake is well camouflaged in its forest habitat. It gets its name from the coppery, reddish-brown color on the top of its head. The venom of the Copperhead is the least toxic of the pit vipers.

Copperheads are Often Persecuted by Humans.

Copperheads in Our Habitat

Copperhead Camouflaged in Leaves is a public domain photo.

According to all of the guides, Copperheads are common in our area, but in the 15 years that we have lived here, we have only seen 1 snake that we thought might have been a Copperhead. It was on the other side of the river and, at the time, we didn't have a camera or binoculars with us.

The neighbors tell us that they run across them all the time.... and kill them whenever they find them. I guess that's why we don't see them. The few that are still alive hide in tree stumps and in holes. They blend in with the leaves and lay so still that we must walk on by without seeing them. One day, I thought I smelled the musky odor they emit when Rio, our dog, was sniffing under our screen house by the river. Maybe some day we'll be able to take some photos of the beautiful Copperhead, but until then, we are happy to feature other photographers' work.

Have you ever seen a Copperhead snake?

Copperheads are very attractive snakes that blend in well with their surroundings. They have dark brown hour glass-shaped cross bands (that may be broken in places) on a light brown background. The belly is pale brown and is marked with irregularly spaced designs.

The northern Coperhead (A. c. mokasen) has wider crossbands and is almost always darker overall than the southern species.

Baby Copperheads look much the same as adults, except they have a green or yellow tip to their tails.

As with other pit vipers, the head is triangular shaped and there are pits (special heat-sensing organs) between the eye and the nostril. Pit vipers also have long, movable fangs in the front of their mouth which, when they are not in use, fold up against the roof of the mouth.

reference: Dundee, Harold A. and Douglas A. Rossman, The Amphibians and Reptiles of Louisiana

The southern Copperhead is found all over Louisiana in all types of terrestrial habitats including rocky areas; mixed hardwood and pine forests, swamp margins and farms, suburban areas and coastal islands. Basically anywhere there is enough ground vegetation or other cover for them to hide.

Southern Copperheads along the Gulf Coast usually hibernate singly, but sometimes several can be found in a particularly good spot. Favorite hibernation sites include: rock crevices, stumps with old root holes and other underground sanctuaries. When above ground, Copperheads often lay coiled in a camouflaged setting like leaf litter. They also move about and are more active at night or during cool periods during daytime.

One of the best books of a series of great books by Gibbons and Dorcas.

Copperhead Portrait by PhotoWolf on Zazzle

The variety of prey for Copperheads is greater than most venomous snakes. Prey for adults includes: vertebrates such as mice, voles, frogs, lizards, birds and other snakes. They also eat large insects.

The method of hunting is to usually wait in ambush for their prey. Juveniles wiggle the yellow tip of their tail to attract small lizards and frogs to within striking range. When a copperhead strikes large prey, it strikes the prey and releases it. Then tracks the animal by following the scent trail until the prey drops. With small prey, they strike and hold until the venom takes effect.

Another book that should be on every snake enthusiast's book shelf.

Copperheads have live births. They do not lay eggs.

They mate twice a year, in late spring and early fall. The females store the male's sperm in special receptacles for long periods of time before the eggs ova are fertilized.

Copperhead breeding is an interesting affair. The male follows the female's phernome trail. When he locates her, he "courts" her by rubbing her neck with his chin.

The young are born in late summer to early fall. The size of the litter is usually from 7-8 every 2 years, but large females can produce as many as 20 or more babies. 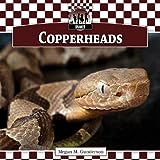 As with other snakes; the small copperheads are preyed upon by many animals.

Common Kingsnakes are immune to Copperhead venom and will eat adult Copperheads. Instead of attempting a strike to ward off a Kingsnake attack, Copperheads lift the center of their body upward. Here's a photo of a King snake eating a Copperhead.

When cornered, a Copperhead's usual defense is to go on the offense and strike, even though it may be to far away to hit the target. In most cases, if given the opportunity, it will quietly slip away without being seen. They emit a musky odor when disturbed. As with any venomous snake, Copperheads should not be picked up because they will usually bite.

Generally, the population is not in danger, but individual snakes are often persecuted by humans who fear them. In the process, many harmless snakes like banded watersnakes, rat snakes and corn snakes are killed simply because of their slight resemblence to Copperheads.

resource: Gibbons and Dorcas, Snakes of the Southeast.

The Copperhead is the most common snake to bite humans in the southeastern United States, yet only one human death has ever been documented.

To stay safe when in venomous snake habitat, you must use common sense. Here are some safety tips:

Familiarize yourself with venomous snakes which are common in the area.

Use a flashlight at night.

Wear sturdy shoes and watch where you put your hands and feet.

Even though the probability of dying from a snakebite in the U.S. is low, any snake bite should be treated as a medical emergency.

You must remain calm and seek medical attention immediately.

DO NOT use the old fashioned snake bite kits or try to cut the bite or use a tourniquet. The best kit is a set of car keys, a cell phone and a companion.

Louisiana is right next door to Texas so we have many of the same snakes. Here's a great book to help identify the venomous ones.