The Cottonmouth (which used to be called Cottonmouth Moccasin or Water Moccasin) is a venomous semi-aquatic snake. It is one of the five species of pit viper that inhabits Louisiana. It is also the only semi-aquatic viper in the world.

The name, Cottonmouth, comes from the way the inside of the mouth is white and looks like cotton. When cornered, as a defense mechanism, this snake will open its mouth to display the "cotton", but they would rather just be left alone.

On this page you'll find information about and photographs (posters) of the Cottonmouth snake, as well as some snake mouse pads, postage stamps, books and apparel, . We have also included a venomous snake quiz that we hope you'll enjoy.

This Cottonmouth is probably a pregnant female. Did you know that Cottonmouth snakes give birth to live young? She was photographed basking on a root ball beside Pruden Creek. You can see the broad body is very pronounced and how it suddenly ends and the short tail begins.

The Cottonmouth (also called Cottonmouth Moccasin and Water Moccasin) is a member of the Viper family.

It is a heavy bodied, dark brown or black snake with a pattern of broad dark cross bands, which usually grow darker with age.

The tail is short compared to other water snakes.

The belly is brown and is heavily blotched with black.

There is a deep pit in the side of the head between the eye and the nostril and a broad dark line from the eye to the angle of the jaw.

Juveniles have a sulfur yellow tip on their tails with bright, clear patterned markings that look more like it's relative, the Copperhead.

When cornered or threatened, the cottonmouth will open its mouth to show the white, cotton-like lining.

Cottonmouths are found all over the state of Louisiana in every permanent or temporary aquatic habitat. Their primary prey is fish that are small enough to be eaten whole, but they also eat frogs, non-poisonous snakes, birds, squirrels and other rodents.

Female Cottonmouths ovulate during May and give birth during August.

The photo above shows two of the five species of the family Viperidae in Louisiana.

reference: Dundee, Harold A. and Douglas A. Rossman, The Amphibians and Reptiles of Louisiana 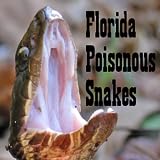 The Cottonmouth is the only semi-aquatic viper in the world.

This Cottonmouth was coiled by a big White Oak tree on a ridge along the Tchefuncte River during a high water incident. We try to discourage them from laying beside a trail, so we chased it away after the picture was taken.

Venomous Snakes Of The Southeast
Everyone who lives in the Southeastern United States should learn to identify the venomous snakes of the area.
Buy Now

Another Cottonmouth was silently making its way to a little beach by the Tchefuncte River, where Al and I and our two dogs, Rio and Chance were peacefully sitting, enjoying the beautiful day. We would have never know the snake was there if it had not been for Rio. All of a sudden he got up and gave a quick bark, while he did a fake lunge and withdraw move at the snake. The snake promptly turned around and slid back into the water. While Rio continued to patrol the little beach I got this shot of the Cottonmouth. 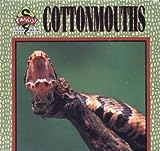 Because of their bright color, juvenile Cottonmouth snakes are often confused with Copperheads. One distinguishing feature is the yellow tip of the tail. This snake will darken as it ages and it will lose the yellow tip.

In late spring we decided to extend the little single carport that was attached to the back of our house and turn it into a screened porch and winter greenhouse combination. We also put hardware cloth inside, so that our cats and dogs could enjoy the protected outdoor area without damaging the window screen.

During construction, an unexpected visitor decided to check out the new structure. I happened upon it when it was curled in the corner under the new water faucet. Here is one of the many pictures that I took of the unwelcome surprise guest.

After the photo op, I used a piece of scrap lumber to lift it so that it could be taken outside. As soon as it was released, it slithered off into the leaves. Hopefully he won't come back to see us again.

I discovered this the hard way when I let my guard down and walked outside after a heavy rain wearing sandalls. Before I saw the 8 inch snake, it popped me on the big toe. The burning pain was unbelievable. I turned to see a little Cottonmouth very much like the ones above, slithering away. After a quick trip to the emergency room, an anti-venom IV and a night in the hospital, the swelling on my foot began to go down. It's much better to be cautious and careful, rather than to have to go through such an experience. 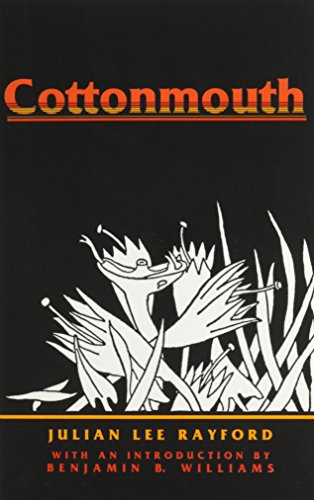 Young Cottonmouth Near the Creek

Snakes of the Southeast
One of the best books available about the snakes of the southeastern United States. Good illustrations and excellent information written in a way that anyone can understand.

Do Not Try This At Home! 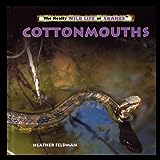 You should never try to pick up a Cottonmouth.

Most of bites from Cottonmouths occur when someone is either trying to pick one up or when they are accidentally stepped upon. Having said that, let me say that my husband doesn't always listen to me and he has been handling snakes (both poisonous and non-poisonous) since he was quite young. He is an experienced snake handler and always takes the proper precautions when removing a poisonous snake from an inhabited area.

Because of the population explosion of song birds this year, this Cottonmouth was making its home around our bird feeders near the house and had already killed a young Cardinal and a young Blue Jay. So one morning, the opportunity to capture and move the snake presented itself. My husband released it a mile away in an unpopulated area by the Tchefuncte River.

Chance the Cocker Spaniel is a Hero

Our maladjusted, rescued 2nd Chance the Cocker Spaniel is a hero. One morning, on our walk to the Tchefuncte River we were going about our business as usual. Rio and I had spied a photo op along Pruden Creek and were focused on finding the bird that we had just seen fly into the trees. Al was filling up the bird feeder and Chance was sniffing around about 3 feet behind us. All of a sudden I heard a scuffle and turned to see Chance whipping his head back and forth with a Cottonmouth hanging from his throat. I called for Al and stepped towards Chance. Just as I reached him, the snake flew off and hit the ground wiggling to get away. I was able to get a leash on Chance, but he was so enraged that he pulled me towards the Cottonmouth. Al herded the snake away from us and it escaped into a hole. When Chance settled down enough for me to look at his neck, I saw drops of watery blood.

Long ago, our vet told us that dogs don't react to snake bites as violently as humans. Usually a Benadryl tablet taken within an hour of the bite is sufficient treatment for dogs, unless the snake is very large or the bite is in the throat area. Since this bite was on the throat, Chance had to go to his least favorite place in the world, the Vet's office. He was surprisingly calm as Dr. Rusty shaved his neck and gave him injections and we were told to watch the wound for infection. If Chance hadn't scratched it so much, he would have been fine, but a hot spot developed that required more treatment. Eventually the wound healed and Chance is fine now. In fact, the ordeal seems to have tempered him a little and he seems to trust us a little more.

I certainly have a special feeling for him. Chance saved me from a painful and life-threatening bite and I will forever be in the little fellow's debt. Do you live in an area where Cottonmouths dwell?

Let's Strike up a Conversation!