Crane Culture: The World of the Crane

One of the world's most elegant and graceful birds is the crane. The crane is a bird that can be found in many countries and has cultural significance all around the world.

In Asian countries such as China, Korea, and Japan, the crane has particularly significant cultural importance and meaning. The crane in Asian artwork is iconic throughout the world and widely associated with these countries.

In this hub we'll explore the meaning(s) and importance of the crane all around this wide world of ours and some of the legends, folklore, art, and more surrounding it. So please, kick back and read on!

Where are Cranes Found?

Cranes live in and migrate across every continent of the world except South America and Antarctica.

All in all there are 15 species of crane and each of these species have their own physical characteristics, migratory patterns, eating habits, and mating rituals.

In China, the crane (鹳/guàn) is associated with longevity, wisdom, old age, and good fortune.

According to traditional Confucian beliefs, the relationship between father and son is symbolized by the Chinese crane. Also, in ancient times, when a Taoist priest died, it was said that he "turned into a crane." Immortals ride on cranes, and mortals who become immortals are also carried off by a crane.

Also according to ancient Chinese legend, cranes also transport the souls of the dead to the heavens above.

In Korea, the crane is known as Durumi (두루미) and is similarly a symbol of longevity there.

Cranes are also one of Japan's most beloved birds. They can be found in Japanese art, fairy tales, poetry, literature, clothing motifs, and much, much more. In Japan, the crane is known as the tsuru and, as in China and Korea, lives for 1,000 years and represents longevity and good luck. Cranes are associated with wedding and New Year ceremonies, and are featured in family crests, or kamon.

In Japanese wedding ceremonies, cranes are often woven into a kimono or obi (kimono sash). The meaning is very obvious: Good luck and a long life together for the bride and groom!

One of the most common depictions of the crane in Japanese art is alongside Jurōjin, the god of longevity and one of the Shichifukujin, or Gods of Good Fortune. Jurōjin is a Taoist god from China who has become popular in Japan over the centuries.

Another common depiction is the crane and tortoise. Both are symbols of longevity and it's only natural that the two appear together in Japanese art, crafts, and elsewhere!

Cranes and the Ancient Greeks

Cranes were an important bird to the people of ancient Greece. To the Greeks, the crane was an ominous bird who was a friend to and a protector of humans.

One of the most famous Greek legends of cranes is the legend of the poet Ibycus. Sometime around 550 BCE, the poet Ibycus was murdered by a group of thieves, who then fled and got away with the crime. However, before dying, Ibycus cried to a flock of cranes flying overhead to avenge him. The cranes looked for the killers and finally found one at a theater in Athens. After finding him, they then circled over his head and continued to hover until he broke down and confessed to the murder.

One popular dance in ancient Greece was inspired by cranes! The Crane Dance was a sacred dance performed by many Greeks, often as a "happy dance." According to legend, the Crane Dance was learned by Theseus, the founding king of Athens in Greek mythology from King Minos's daughter Ariadne after defeating the Minotaur.

One country where cranes were a part of the national poetic tradition is Persia, or Iran as it's known today.

There are three species of cranes that migrate to Iran every year: The Common Crane, the Demoiselle Crane, and the Siberian White Crane. Each migrate to the country every winter and take up their winter residence in various parts of the country!

In ancient Persia, poetry was written about the crane and its ability to fly high among the clouds, as well as its calm, disciplined temperament and the amazing "whoop-whoop" sound it makes when flying overhead or coming in for a landing. 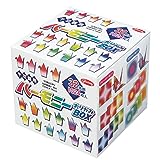 The most famous art form to depict the crane in both Japan and around the world is through origami, or the art of paper-folding. Cranes are one of the most common and easiest shapes to fold in origami, and the shape that most beginners learn how to make when starting out with origami.

Origami has been a part of the Japanese art and craft landscape since the Edo period (1603-1867).At first it was used as a form of letter-folding, but it grew into an elaborate art. It's been said that the art really blossomed when cheap and easily obtainable types of paper became available to the public during this period of time!

During this period of time, people learned not only to fold different shapes, but different objects as well. One of those objects was the paper crane!

The art of origami has spread all over the globe since then and with it the art of folding paper cranes!

Learn How to Make Origami Cranes!

One old Japan tradition involving cranes and origami is that of the thousand paper cranes. It's believed in Japan that if you string together a thousand cranes, a real-life crane will come along and make your biggest wish come true. Some even say that good luck will be yours for all eternity! This belief goes back to the ancient belief that the crane is one of the Immortals and can live a thousand years.

To this day, many Japanese string together a thousand origami cranes for whatever wish they want to come true, whether it be for good luck on a university exam, prosperity, or just peace on Earth.

This tradition became popular in Japan after World War II when Sadako Sasaki, a schoolgirl from Hiroshima who survived the atomic bombing of her city and suffered with terminal lukemia afterwards, attempted to make a thousand paper cranes just because she wanted to grow up and live. Sadly enough, she only made 644 before she died on the morning of October 25, 1955. Her friends and family finished the rest and buried them with her. To this day, people leave strings of 1,000 paper cranes near her statue at the Hiroshima Peace Park as an offering for world peace.

Sadly enough, most crane species worldwide are threatened or endangered. The destruction of their habitat by urbanization, pollution, war, and other human-made factors has taken its toll on their populations. Years of hydrology changes to major rivers due to the damming of rivers and water diversion projects have deprived cranes of their natural habitat. Natural habitats they need to survive.....

Fortunately international organizations such as the International Crane Foundation and World Wildlife Federation have worked hard to keep the world's cranes from disappearing forever and have worked with local governments to protect crane species and their habitats.

In addition, many zoos and wetland centers have launched programs to breed cranes in captivity. Some of these programs have even reintroduced cranes to areas where they were previously extinct!

Thanks For Dropping By!

The crane is a magnificent bird that has inspired poets, been the subject of numerous legends, folklore and art, and is an important part of many of the world's cultures. Most importantly of all, it's a bird that inspires us to soar high and be as graceful as it is.

Thank you for your visit and hopefully you've enjoyed your visit to this hub! If you have any questions or feedback, feel free to leave them in the Comment section below. I appreciate any and all comments! Also, please drop in again as I'll make more updates to this hub over time!