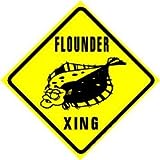 Flounder, also called fluke, any of two groups of flattened fishes with both eyes on either the right or the left side of the head. Flounders are found in nearly all parts of the world, usually in shallow to moderately deep salt water. They range in weight from only a few ounces to several hundred pounds. Many flounders are a valuable source of food, and some are also popular game fish.

Of the many hundreds of flounders the best known include the turbot, plaice, and some fishes called soles. True soles, however, are another kind of flatfish closely related to the flounders.

At birth the young flounder looks like other young fishes. In a short time, however, one eye starts moving toward the other eye, and the body begins to flatten. Turning so that the sighted side is upward, the flounder sinks to the bottom, where it rests or makes short swims for shrimps, worms, or other food. The side where the eyes are located is pigmented, usually with a dull color, and blends with the surroundings of the flounder.

Flounders are grouped according to the side of the head on which the eyes are located. Among the best-known right-eyed flounders are the winter flounder (Pseudopleuronectes americanus), or mud dab, and the yellowtail flounder (Limanda ferruginea), or rusty dab. Both are found in the western North Atlantic. A left-eyed flounder, the California halibut (Paralichthys calif ornicus), is an important food fish in California and is also a choice game fish.