Green Treefrogs are colorful little frogs that coexist well with humans. They are amphibians of the woodlands in riparian areas. Currently Amphibians are in a worldwide crisis due to pollution and a mysterious fungal disease.

Green Tree Frog (Hyla cinera) by lalagniappe aka Y.L. Bordelon. This and other Tree Frog Art can be purchased in Naturegirl7's Shop on Zazzle.

This frog is the state amphibian of Louisiana and is another of the beneficial predators that help organic gardeners by eating snails and other arthropods.

I have been fortunate to photograph them in our backyard habitat. We hope you enjoy the pictures and that you learn something new about Hyla cinerea from this page.

GreenTreefrogs are another member of the organic pest control squad.

As its name says, this frog is bright green, with some gold flecks on its back. Its underside is light and it has a white strip from the eye to its hip. Maximum size is about 2.5 inches. Some natural hybridization takes place between H. cinerea and H. gratiosa.

Listen to the call from The Frogs and Toads of Georgia.

It ranges from Texas to the East Coast of the United States. They usually live in forested areas around rivers, streams, ponds and lakes. When it is cool, they hide in and under logs as well as under tree bark. During the rest of the year, they sit in shaded areas around buildings, in natural crevices, on leaves and on other vertical surfaces.

We often find them resting under the eaves of our house. They love the curled leaves of the ginger plants and the green stems of the many tropical hummingbird plants that we have planted in sheltered areas.

We found the one below resting on a tent that we had erected down by the Tchefuncte River. They are very tolerant of humans and cameras so I was able to get very close to it.

Frogs and Toads of the Southeast Book

I heartily recommend this wonderful reference book. The pictures are good and it is written in an interesting, easy to understand style.

I once encountered a black racer snake that had grabbed one in the rain garden. The poor frog was screaming loudly. As I searched through the plants, I startled the snake and it dropped its prey. The little one escaped this time.

This photo was taken in my garden. The little one was napping on the stem of a red amaryllis. Green Tree Frog Poster is by me, aka naturegirl7

Frogs and Toads of North America with CD of Calls 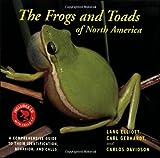 The Frogs and Toads of North America: A Comprehensive Guide to Their Identification, Behavior, and Calls

If you would like to learn to recognize the calls of frogs, then this is the book and CD for you.

Males sing their "quonk, quonk, quonk" song on warm nights from perches above water. They breed in various wetland areas from ditches to lake margins. The jelly-like eggs are laid from April to mid August, in irregular masses from 5 to 40 (but may number 340 - 500) that are attached to floating vegetation.

The tadpoles measure at least 49 mm. They have a light stripe from the eyes to the snout and a mottled tail fin. Green Treefrogs stay in the larval stage for 55 to 63 days. In Louisiana, transformation into adults occurs from July 1st through late October.

I enjoy listening to the calls of the many frogs that live in and around the pond. We often find tiny babies that are only as large as a fingernail.

Reference: Dundee and Rossman. The Amphibians and Reptiles of Louisiana. LSU Press, 1989.

These treefrogs live and breed in our habitat. This one was right outside the kitchen door on a giant turk's cap stem. Print by naturegirl7

Video of the Calls

Designs that were created using some of the many photos taken in our habitat by me, aka naturegirl7.

If you can't provide a habitat for these and other amphibians, then perhaps you could help spread the work about their plight.

The Frog and Toad books are good for beginning readers.

What kind of tree frog inhabits the area where you live?

Spread the Word - Save the Frogs

Green Tree Frog Posters & Prints by art_prints_posters and others can be purchased on Zazzle.

Links to More About Frogs

Don't hop away without leaving a note.