Did you know that there used to be a royal menagerie in the Tower of London? The Tower of London is one of the oldest landmarks in the city of London, and has the dark reputation of being a place of fear and torture.

It is infamous for the many illustrious prisoners who have been housed there in the past, many of whom still remain buried under the floor of the chapel of St Peter ad Vincula, having been executed on the Tower Green or outside the walls on Tower Hill.

The building was started by William the Conqueror in the 11th century and was designed to be a fortress that would intimidate the citizens of England’s largest metropolis and help subdue the newly conquered country.

During the Middle Ages, it was also used as a royal residence and was traditionally the place where the new monarch would spend the night before their coronation at Westminster Abbey.

The Tower of London would have been a bustling place in those days, with the famous beefeater guards, builders, servants and clergy all being housed there and visitors streaming in and out.

But of all the thousands of former residents of the Tower, the exotic wild animals were perhaps the most unusual and made up one of the oldest known zoos in Britain.

Beginnings of the Royal Menagerie in the Tower of London

So how did the Royal Menagerie in the Tower of London come about? In medieval times, it was an accepted custom for rulers to exchange gifts of exotic wild animals.

The choice of wild beast was often heavily symbolic; with the chosen animal being one that was either part of the coat of arms of the royal recipient or that some of the qualities associated with the wild animal, such as vigour, power, strength and bravery, were hopefully shared by that king.

But the English kingss had to solve the problem of where to house these lavish, living presents that were arriving from Europe. William the Conqueror established a small royal menagerie at his manor of Woodstock that was added to by following kings, but the first mention of wild animals being kept at the Tower of London comes from the reign of King John (1199-1216).

After King John conceded territory in Normandy to Philip Augustus of France, three boatloads of exotic wild animals arrived in England by boat and ended up being housed in the safety and security of the royal fortress. 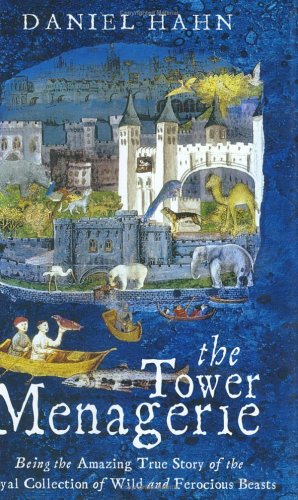 The Tower Menagerie : The Amazing True Story of the Royal Collection of Wild Beasts
Buy Now

Some of the earliest historical references to the Tower of London menagerie occur during the reign of King Henry III, when the citizens of London were enthralled by the daily sight of a ‘white bear’ being led in shackles to the banks of the Thames everyday, where it was tethered so that it could swim and catch fish. It was, of course, a polar bear that had been presented to Henry III by King Haakon of Norway, who also gifted a lion to the English king.

Now, even back then, keeping exotic animals was not a cheap hobby, so during 1252 the sheriffs were told that they had to pay four pence a day towards the maintenance of the king’s polar bear. The sheriff’s were asked to dig into their pockets again in 1254, when they were commanded to subsidise the building of a 40ft wooden elephant house.

This construction was to house the first African elephant ever to be seen in Britain, the elephant being a gift to the English monarch from King Louis IX of France. This African elephant found instant fame in England when it was brought ashore at the port of Sandwich, and created quite a stir with the locals who were fascinated to see such a strange beast.

Location of the Royal Menagerie During the Middle Ages

The exact location of the royal menagerie during medieval times is still not known. However, during the 1930’s two lion skulls, one dating from the 13th century and one from the 15th century, were unearthed between the Middle and Lion Towers, suggesting that this was the area where the lions were housed.

Lions were a very popular and prized royal gift, as lions were prominent heraldic beasts in the English royal coat of arms. Henry III also received three leopards as a gift from the Holy Roman Emperor, Frederick II, on the occasion of his marriage to Eleanor of Provence, who was the sister of the Emperor.

The three leopards were meant to be living symbols of the three lions passant guardant, or heraldic leopards, in the Plantagenet coat of arms. During the reign of King Edward I the post of ‘Master of the King’s Bears and Apes’ was created, with the post later being renamed ‘Keeper of the Lions and Leopards’.

The Royal Menagerie is Opened to the Public

In its early days the royal menagerie was the private attraction of the king and his favoured courtiers, but during the reign of Queen Elizabeth I it was opened to the public, who had to pay three half pence for a ticket or supply a cat or dog to be fed to the big cats.

Lots of dog skulls were also excavated alongside the two lion skulls, testimony to the cruel sport of lion and bear baiting by dogs that was so popular in those days.

By the 16th century the wild animal collection has also expanded to include a tiger, a lynx, a wolf, a porcupine and an eagle. King James I showed an especial interest in his royal menagerie and added a flying squirrel from the American Colony of Virginia, five camels and an elephant.

King James’s biggest interest was the Tower of London’s lions. He even had a special feed bottle with a teat made so that some orphaned lion cubs could be fed and he also had an exercise yard created for them in the Tower’s moat in the vicinity of the Lion Tower.

The Keeper of the Tower’s animals was also well looked after, as in 1672 the great Christopher Wren was set to designing a new Lion House, which the Keeper of the Royal Menagerie was allowed to use as a home for life.

Welfare of the Exotic Wild Animals

Despite their popularity with both royalty and the paying public, the way that these exotic royal gifts were kept, would have horrified modern animal experts. Apparently there were even complaints that the stench from the animal’s enclosures was so overwhelming that the health of the Keeper and his workers was badly affected.

The animals also suffered injuries and actually died from some of the bad treatment that they received. During the 18th century the Dey of Tunis sent two ostriches to join the other denizens of the royal menagerie. It was the first time that these large, flightless birds had ever been seen in Britain and back then it was popularly believed that ostriches could happily eat and digest iron.

Inevitably, within a few days one of the poor ostriches was dead after it had eaten around 80 iron nails that had probably been fed to the bird by a credulous public.

The popularity of the royal menagerie did, however, begin to diminish over the years and by 1822 the collection had dwindled to four lions, a tiger, a panther, a leopard and a grizzly bear that went by the name of Martin.

The fortunes of the royal menagerie were then temporarily boosted by the appointment of the dedicated Alfred Cops as the new Keeper in 1822. Alfred Cops was devoted to the care of the animals under his control and he also actively sought to build up the animal collection so that it came to contain 280 different animals from 60 different species.

The Decline and End of the Royal Menagerie

However, it may have been the addition of such curiosities as a zebra, a griffin, a baboon, an ocelot, an alligator, a bear from Borneo and kangaroos that could have been one of the factors that eventually led to the demise of the royal menagerie at the Tower of London.

There had already been concerns over the welfare of the animals and also the safety of the public, as there had been several accidents involving the animals. In 1686 the maid of the Keeper, Mary Jenkinson, was viciously attacked by one of the Tower’s lions. Although they amputated the poor woman’s arm in a bid to save her life, she died a few hours later anyway.

Later, in the 18th century, a baboon was being shipped to join the royal menagerie, and while still at sea the baboon managed to get hold of a heavy cannon ball that it then threw at a young boy sailor and killed him.

Things came to a head during the tenure of Alfred Cop’s when a leopard badly mauled a worker who was cleaning out its enclosure, one of the wolves escaped, a monkey bit the leg of a soldier and even Alfred himself was almost strangled by a boa constrictor that he was showing off to the public.

On the orders of the Duke of Wellington, the collection of animals that formed the royal menagerie were transferred to the Zoological Society of London’s new zoo that had been built in Regent’s Park, and by 1832 the only animals still residing in the Tower of London were those privately owned by Alfred Cops.

So after 600 hundred years of history the days of the Royal Menagerie at the Tower of London were over and no longer would the curious citizens of London flock to the Tower to gaze at these strange, exotic beasts that previously they had only ever heard of or maybe seen as pictures in a book.

Luckily for the wild animals, the monarchy of England no longer receives exotic wild animals as gifts from fellow rulers and modern zoos have much higher standards of accommodation and husbandry for the animals that they care for.

But the royal menagerie will always be one of the more interesting elements of the history of the Tower of London, and the ghost of these royal lions, leopards, bears and tigers no doubt roam the darkened night passages of the Tower alongside those of executed Queens and traitors.