How to Get a Hummingbird Out of the House

What to Do if a Hummingbird Flies into Your Home, Barn, or Other Building

Maybe it sounds a bit far-fetched, but in my experience -- and that includes quite a few "get the hummingbird out of the house!" events (which included the exclamation point) -- it's not as rare as you might think.

The first half-dozen times this happened to me, I was living on a farm in Pennsylvania, where hummingbirds were very active around the flower and vegetable gardens near the house and also around the barns, where the doors, which were often open, were large and the skylights above the rafters attractive to these little avian hummers. So they'd often fly in and get confused and stuck.

My most recent experience with a hummingbird in the house happened at night, when hummingbirds supposedly don't fly. I'll tell you about that "fun" fifteen minutes (which seemed much longer) and how we got the little guy out of the house and on his way, with a sip of hummingbird energy drink for the trip back to the nest.

Maybe this Hummingbird had a Craving for Pizza?

Our most recent encounter with a hummingbird in the house

It would have been rather funny -- especially Jeremy's reaction -- if it hadn't been for the fact that our uninvited house guest didn't fly right back out the way he'd come in.

It was about 9pm by the time our pizza arrived. This was the first time in years we'd ordered in, and one of the rare occasions the front porch light was on. I'd turned it on for the delivery guy. And I guess that's what attracted the hummingbird, who was probably nesting nearby. Just as Jeremy opened the door to exchange money for pizza, in the little bird flew.

"Deb! Help!" he shouted (Jeremy, not the hummingbird). "There's a hummer in the house!"

Ugh. I knew from experience this wasn't going to be easy. I also knew we needed to act fast, to prevent the bird from hurting itself. I walked into the living room to see poor Jer, looking frantically around the ceiling, then duck as if if a canon had been fired when the hummingbird buzzed through the room. (Okay, so I ducked, too.)

Our clumsy hummingbird rescue effort went something like this:

We rushed around and turned off all lights inside the house, propped the front door open, and hoped the hummer would fly towards light on the porch and out the door.

No such luck. And no buzzing anymore, so we grabbed flashlights and went searching the house. We found the hummingbird perched above the kitchen cabinets.

There's no way to shut off the kitchen from the rest of the house, so we tried to turn lights on, then off, then on, in succession through the house, to try to lead the bird toward a door. That ALMOST worked -- three times -- but then the hummingbird would catch a faint light through a window and fly further back into the house again.

At one point, he flew under the dining room table for some reason. I came into the room to find Jer on his elbows and knees, half under the table with his toosh in the air, talking to our bewildered intruder.

Then the hummer flew again, and Jer smacked his head on the bottom of the table. No time for sympathy, though; I had to save the little bird, who'd been leaving feathers from his own head stuck to the ceiling throughout the house, every time he'd make impact.

Then I remembered how we used to do it on the farm -- to get hummingbirds out of the house and the barns -- and I ran to the closet for a broom.I knew the bird must be getting very tired and found him again perched on a kitchen cabinet.

Luckily, this plan worked right away.

I slowly lifted the bristle end of the broom up toward the hummingbird, placing it in front of him at his feet, and he hopped right on. (Or flitted on, I guess, because hummingbirds can't walk or hop. Their feet can be used to scoot sideways, though, while they're perched.)

Then I sloooooowly lowered the broom, the bristle end with the bird as far from me as possible, and moved it towards the open door. The hummingbird seemed to know where we were going and sat still for the ride.

Once outside, he still sat there, and I moved him over toward the feeder, now illuminated by the back porch light.

Suddenly, the hummingbird lifted off, took a quick drink of nectar from the feeder, and then was gone. Jer and I rushed around to turn off all outside lights and close the door.

A Bit About Hummingbirds

Hummingbirds, the tiniest birds in the world, not only fly forwards (fast!) but also backwards and sideways, and they can hover too.

On average, these little hummers need to eat seven times an hour for about 30 seconds to a minute at each feeding or they become weakened, which is one of many reasons to get them out of the house, barn or other building as quickly as possible, back outside where they can get nourishment.

When hummingbirds sleep at night, they go into a hibernation-like state referred to as "torpor" to conserve energy. During this torpor, hummingbirds might even look like they're dead and once in a while can be seen hanging upside-down. It can take as much as an hour for a hummingbird to fully recover from torpor, which can be fatal to a weak hummingbird. You can read more about hummingbirds and torpor in an interesting Science Blogs post on NationalGeographic.com.

Hummingbirds actually spend most of their lives perched.

And this is how you SHOULD get a hummingbird out of the house or barn or other building....

How to Get a Hummingbird Out of My House (or Yours)

Without injury to the bird or to you

Now that I've talked to some friends who've had similar experiences and one in particular who really knows her birds, I'll share the proper way to get a hummingbird out of the house and back outside where it belongs.

First things first ... try not to panic. Easier said than done, I know. We may be well aware that's just a cute little bird flying around, but when it's confined within the walls of our home or other building, a hummingbird can seem more like a huge, buzzing bee. I, for one, break out in a cold sweat when there's a tiny bee in the house.

Find the hummingbird -- hopefully it's in a room with a door or windows you can open to the outside -- and shut any interior doors, so the bird can't get into the rest of the house.

Then, close blinds and curtains so the room is completely dark, leaving open just one window or door that leads to the outside. Open the window or door as wide as possible, so the hummingbird has the best chance of finding its way out.

Turn off any lights in the room and carefully leave, making sure all other people and pets leave the room as well. Close the interior door behind you.

After a half hour or so, check to see if the hummingbird has left through the opening on its own. Don't turn on the light but stand there in the room and wait for a few minutes, remaining still, listening for the bird -- the buzzing of its wings or a little "cheeping" sound.

If you don't hear anything, turn on the light and check the room more thoroughly.

If the bird is still inside, repeat the above.

If the bird doesn't leave on its own the first time, when left alone to find its way out, get a broom, mop or other long object to use as hummingbird transportation ... not to hurt the little guy (or girl).

Quietly enter the room -- just you and the hummingbird -- and shut the interior door again.

Slowly, approach the bird, holding the broom or other long object out to it. By now, the hummingbird is probably very tired, so, as my experience has been on several occasions, it may move onto the end of the broom (I hold the larger, bristled end out to the bird), and you can calmly move it toward and out the door or window.

If you can walk out the door with it and bring the hummingbird towards your feeder, it may get a quick energy drink before buzzing on its way.

I've actually had a tired hummingbird be willing to ride on my finger -- and then sometimes I could cup my hand over the bird to keep it there -- and carried it outside. If you can easily reach your hand out to a hummingbird that's been stuck inside for a while, this might work. 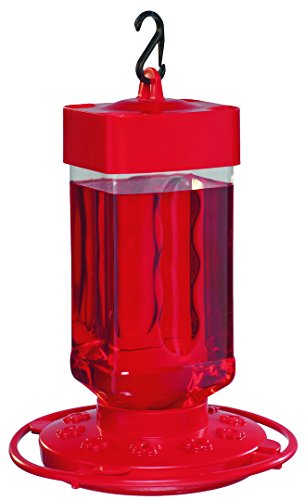 Suspend one or more of these feeders from branches or hooks near the house or in your garden, in a spot where you can easily watch and enjoy the little birds. Try to keep the feeders away from open doors or windows, so the hummingbirds will be less likely to get inside.

This hummingbird feeder has 6 feeding ports and a 30-ounce capacity, with a removable circular perch. The nectar reservoir unscrews easily from feeder base for filling and cleaning. 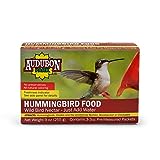 First Nature 3054 Red Hummingbird Nectar, 32-ounce Concentrate
Some people prefer to use liquid concentrate rather than dry mixes. With concentrate, there's no boiling water and no sticky cleanup. This 32 oz. bottle makes a full gallon of nectar when mixed with three parts water. Or you can make your own hummingbird nectar with this easy recipe using regular, white sugar.
Buy Now

Easily Keep Ants Away from your Hummingbird Feeders

Ever see a steady march of ants going to and from that sweet nectar in your hummingbird feeder? Yuck! Well, this simple yet effective and inexpensive ant trap, hung above the feeder, will prevent that from happening.

Don't just take my word for it. There are lots of very favorable reviews on Amazon.

Have You Had a Hummingbird in Your House? - If so, what did you do?

Share your "wild critter in the house" story (the short version here, and if you want to give more details, there's a guestbook below).

What kind of wild critter has gotten into your house?

Thank You for Buzzing By - Please leave a comment and let me know you were here....