How I Potty Trained My Chihuahua In Less Than 2 Weeks

When I First Got Her

My ex boyfriend brought me a puppy one day. It was this beautiful little chihuahua puppy that his co-worker had found in a parking lot shaking under a car. The same day she told him about this puppy was the same day her husband was going to take the puppy to the pound because they lived in an apartment complex which didn't allow animals. My ex knew I wanted a puppy at that time so he was nice enough to surprise me! She is a beautiful female my daughters and I named precious. Well precious was quite the little mess maker. Mind you I never had a puppy before, so I had no idea how to potty train her. I read that chihuahuas are difficult to train, especially females. I had been placing those doggie pee pads in the living room. Unfortunately when I first laid them down she didn't use them. I have wood floors and some throw rugs around the house and of course she was peeing on the rugs every chance she got. Another one of her favorite places was going in the kitchen pantry and doing number 2. This had to stop!

This Is Exactly What I did

Dogs like to pee on something soft like grass or a rug. They usually don't like to go on a cold floor so my first step to potty training was I decided to take all the rugs off the floor and put them away. Now dealing with the kitchen pantry issue. I decided to barrier off access to the kitchen or any other part of the house temporarily. Then what I did was set up 2 pads side by side in an area in the living room where she had a bit of privacy. (For some reason, adorably these dogs seem a bit shy to go in front of people). This would force her to go on the pad I thought because she wouldn't want to go on the floor and she really had no other choice. Well not exactly, she would go on the pad from time to time but she was still going in random other spots on the wooden floor.

I always noticed when watching television shows with animal trainers they always seem to get the animal to do what they want by giving them treats. This gave me an idea. I had bought precious some beef jerky (dog treats) a few days earlier, so I decided to chop them up in little pieces to use for training. I decided I would give her a treat and a lot of verbal praise and petting every time she went on the pad. Then when she didn't go on the pad, I would tell her "NO" in a firm voice, pick her up and place her on the pad to try to let her know that's where she should go instead. This was not working well at first. The absolute hardest part of the training is what I did next. Luckily I work from home so I was able to do this, but for someone who isn't at home a lot or just doesn't have a lot of spare time, it might prove to be a little more difficult and time consuming. But what I ultimately had to do was constantly stay in the living room with her and watch her every second. I would look for signs to see if she was looking for a place to go to the bathroom so I would be able to immediately correct her at the time she did it. You cannot punish a dog after the fact or else they have no idea what they did wrong and it defeats the purpose, so this made it a bit harder. So for a solid week in a half I watched her every move. As soon as I saw she was getting ready to pee I immediately would pick her up and place her on the pad. She just stood there and starred at me at first, but then after a few times of doing this she finally went pee and I gave her the treat and lots of praise. Little by little she started catching on. Before the second week was over she was going straight to the pad and as soon as she would finish peeing she would run to me so excited to get her treat.

Now precious goes right to the pads herself without any help or any treats. She sleeps with me in my bed and now all I have to do is take her in the living room and she knows to go right to the pad to relieve herself. I still gave her treats for about another week then I stopped because I saw she was already trained...

One thing I think made it even more difficult is I leave water out for her at all times. I think it's a better idea when doing this that you limit the water intake. This was so much harder because she pees literally like 10 times a day so this was a constant thing of watching her. I did that because I was afraid I was going to deprive her of water but as long as your dog has a sufficient amount daily, you can limit it. Just make sure to ask your vet first.

This is an incredible video that proves this spray is really genuine and something in it entices the dog to go potty. This is a REAL recording filmed by an actual owner of a chihuahua. See for yourself how this amazing spray really works!

This spray literally triggers the instinct of the dog to go potty both 1 and 2. It' s literally an amazing scientific discovery packaged in a simple spray! It's so incredible you can see for yourself in the video above.. 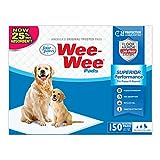 Everyone I've talked to that owns a chihuahua says it's next to impossible to potty train theirs. They always seem amazed that I was able to train mine..

Were You Able To Potty Train Your Chihuahua?

So I decided to get another little chihuahua to keep my baby company,however, this time I just didn't have the time or energy to potty train him so I actually bought the spra

Thank you for reading my lens! I hope this was helpful to you and your doggie potty training... Please sign my guestbook.