Elephant is an only biggest mammal on earth.

Here I am going to talk about Indian Elephant and how Indian elephant is a part of the Indian culture and religion.

Elephants are commonly found in Africa and Asia with the former larger in size. So there are two types of elephants - African and Asian.

How to distinguish these two types of elephant?

There is one incident explained in Indian mythology. During "Sagar Manthan" the Gods [Deva] and the demons [Asura] churned the ocean for the elixir of life called "Amrit" [Nectar] which make them immortal, the 'navratnas' [nine jewels] surfaced. And one of these jewels was the elephant. Since that time elephant is considered enormously precious to be preserved and protected like the way jewels are.

In another mythological story, Buddha's mother has dreamt of a white elephant in one of her dreams. After that the prophet of peach Gautam Buddha was born. Obviously, therefore, a white elephant in Indian culture context can never connote redundancy, as it would in the West.

After that, what comes the 'Airavat' (elephant) - the greatest of the all 'vahanas' meaning the carriages of Gods. The God of all Gods - Indra - chose the Airavat as a carriage for him. Though other gods were also riding the elephants, but this Airavat was specially known among them. More amazingly, unlike the ordinary elephants having two tusks, this Airavat had ten tusks with regal size.

The Mahabharata epic also glorifies the legendary story of such elephant called 'Ashvatthama' and there was the similarity of the name between him and the name of the revered teacher Guru Drona. In the midst of the great battle Kurukshetra which was faught between the Pandavas and the Kauravas an innocuous lie was announced that Ashvatthama was dead. It was intended to upset the Kauravas by the impression that the teacher's son was dead but in fact, it was the elephant that was killed. Elephas Maximus: A Portrait of the Indian Elephant

Elephas Maximus: A Portrait of the Indian Elephant
Mixing mythology and natural history, Stephen Alter lets readers share his lifelong love for the Indian elephant, Elephas maximus. While legends threaten to overwhelm facts in the tale, Alter has nonetheless presented an accurate portrait of his subject, true to centuries of Indian tradition. Beyond metaphors and fables, elephants occupy an important place in Sanskrit literature. Gajashastra, or "elephant science," was studied and recorded in several texts that are based on oral traditions. As much travelogue as science book, Elephas inextricably links the Indian elephant with the history of southern Asia itself. In pre-colonial India, elephants were wound up in religion and daily life; in modern times, the animals were first hunted then fetishized by Westerners. Alter reserves judgment on these issues, except to note that none of India's 20th-century history has been good for elephant populations, which are endangered or threatened nearly everywhere. He treks into parks and reserves, seeking out wild elephants and describing their awe-inspiring behaviors. The stories he uncovers along the way--of temple elephants, mysterious Elephanta Island, seagoing elephants, and the god Ganesha--weave a spellbinding tale. --Therese Littleton
Buy Now 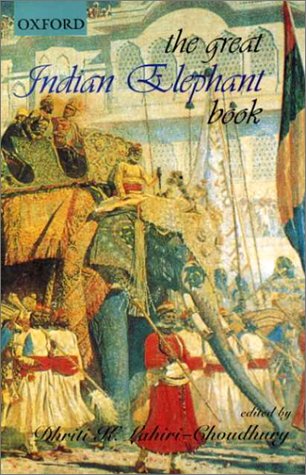 The Great Indian Elephant Book
For centuries, elephants have been a source of wonder, fear, and fascination to man. While depiction of the elephant in art, sculpture and literature goes far back in time, this anthology focuses on the nineteenth century when the British Empire was on the ascendant in India, Burma and Sri Lanka, and colonial rulers began using the elephant in war and for transport, even as they were hunting it. This comprehensive collection includes excellent descriptions of these intelligent and sagacious animals in the wild, with rare insight into elephant behavior, anatomy and haunts, as well as the odd apocryphal story about them: is there really an elephant graveyard in Sri Lanka? Do elephants have extraordinary memories? Did a man-eating elephant actually exist? The book contains accounts by leading elephant-men--from Champion and sanderson to Samuel Baker and Symington--all from works no longer readily available. With fascinating photographs and drawings, this is an informative and delightful collection
Buy Now