Read about killing rats in your home, business or landscaping. Find solutions for your rats problem and facts about rats spreading diseases. Learn how to kill rats and watch a video.

This article explores the frightening dangers underlying a rats problem and why killing rats is the only solution to the threat they pose. Here you will also find facts about these rodents to identify their presence on your property and find the best ways to kill rats.

Killing Rats Before They Kill You

Rats harbor more than 40 diseases which infect humans. According to the U.S. Fish and Wildlife service:

"Rat-borne diseases are thought to have taken more human lives in the last 10 centuries than all the casualties of all the wars and revolutions combined."

And rats contaminate everything they touch.

A rats problem in a home or business is not just a nuisance; it is dangerous. Rats are carriers of multiple diseases and so are the fleas which come with them. Consider this list of rat-borne horrors:

1. Brucellosis (can be fatal and symptoms can continue for years even with treatment)

2. Hantavirus (lung and kidney failure - even with treatment, the lung infection has 50% fatalities)

3. Leptospirosis (can be fatal)

6. Salmonellas (can be fatal)

And we wouldn't want to leave out the granddaddy killer of all, the Bubonic Plague, which wiped out a third of Europe (over 75 million people) in the 14th century. This scourge is still around and the mortality rate is about 70% without treatment.

Most of these diseases can be spread by rat urine, mucous and droppings, contaminated dust particles, and from fleas which have bitten infected rats. In other words, you don't have to come in direct contact with rats; it's enough just to be where they have been.

If you know you have a rats problem and you or someone in your household or business is feeling a little 'under-the-weather', seek immediate medical attention. 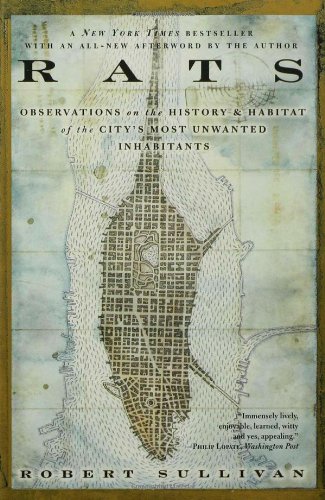 Rats: Observations on the History & Habitat of the City's Most Unwanted Inhabitants

The rats infestation is so bad in New York City that the municipality operates a Rat Information Website, which gives the latest rats report for every neighborhood.

Unlike most mammals, a rat's front teeth never stop growing. Therefore, these rodents are constantly gnawing at something as a means of trimming their constantly growing teeth.

Take a good look at the photo of a rat's teeth. Those teeth bite people, too, especially infants and the infirm. According to the New York City Health Department, over 100 people are bitten every year by rats in that city alone.

In the U.S. there are more than 14,000 cases of rat bites every year, and some of those bites are fatal to the victims.

Worldwide, cases have been reported of babies having their toes completely bitten off or their faces mauled by rats. One unfortunate man had his penis bitten off by rats while lying in a hospital bed in India and he bled to death.

If all of the above isn't enough to convince you that a rats problem can be deadly, did you know that rats can cause fires?

Rats can and do chew through almost anything, including lead plumbing pipes and concrete. One of their favorite things to chew on is electrical wiring.

It has been estimated that over 25,000 fires in the U.S. every year are caused by rodents chewing electrical wires. If that isn't scary, consider the fact that most insurance policies do not cover a property fire if it was caused by rats.

If you've got a rats problem you need to understand the enemy. In the U.S., the rat population equals the human population: one rat for every man, woman and child. Put a pencil to it.

Soon, humans will be outnumbered by them. If you have rats in your home or building, you have a ticking time bomb. And the rats you harbor will never just go away.

Researchers from the Johns Hopkins University Bloomberg School of Public Health released a scientific study that proved rats seldom journey more than a block away from their home nest. And rats are communal. There's no such thing as a solitary rat. If you've found one rat, you have a cluster of rats. Not only that, but a pair of rats produces 900 offspring in a single year and a few rats soon become a colony.

If you suspect you have a problem with rats instead of mice or squirrels, look for these signs:

2. Rat droppings (pictured) are about 1/2" long and are pellets like little worms. Mouse droppings are much smaller and look like black rice.

6. Rats feed at sunup and sundown and this is when you might hear scratching inside walls or in the attic.

Unlike mice, rats will die within three days without water. If you can seal off an area where you know there are rats and where there is no access to water in plumbing pipes, your rats problem will be solved in four days.

If you don't know where the rats are nesting, you have some detective work to do.

The rats enter a premise through holes, gutters, sewer pipes, torn or chewed screens, etc. Carefully inspect the exterior of your home or building to identify possible entry points and seal them.

Immediately, do the following:

1. Remove clutter and debris from the exterior. Stacks of firewood and lumber are favorite rat habitats.

2. Keep all pet food in aluminum cans with tight lids. Never leave uneaten pet food in the pet's dish. Pet water dishes must be kept away from rat infested areas.

3. Stop feeding the birds until your rat problem is gone. Rats love birdseed and birdbaths.

4. Secure lids on all garbage cans, inside and out.

5. Repair all leaky faucets and remove standing water, inside and out.

6. Keep all food in sealed areas in the kitchen only.

Rats can eat through lead and concrete, let alone aluminum or traps with just sticky paper. And standard rat traps will never kill enough rats to make a difference.

The Best Way to Kill Rats

Remember that you aren't dealing with a single rat but with a colony. That's why the standard rats traps won't solve a rats problem. Also, a trap that resembles the old-fashioned mouse trap won't work when there are rats as big as cats!

The best way of killing rats is with a Rat Zapper. The Victor M240 Electronic Rat Zapper is the best trap-and-kill product on the market. It zaps rats with 8,500 volts, killing even large rats quickly and humanely. The instructions are easy to follow.

This trap is safe to use in homes with children and pets. You just add a little peanut butter and your rats problem will be solved in about 24 hours.

The batteries in this unit are enough for 50 kills.

One clear advantage of this trap over other methods of rodent control is that it can be used safely outdoors. When a neighborhood is infested with rats, it takes a concerted effort by all residents to eradicate the rats. Consider a neighborhood campaign to have everyone buy one of these electronic rat traps.

There are people who want to trap rats and release them into the wild.

If you choose the live trap, be aware that you must deal with releasing the rat without harming yourself or others. A rat can jump 3 feet from a standstill. You must be prepared to deal with the rodent the way you would with a rattlesnake.

Also, remember that rat urine and droppings contaminate air and dust. And, the trap must be disinfected before you take it back home.

If you decide to release the rodent, do so at least five miles away from your property and any residences. But remember – if you've found a rat, there are at least a dozen more nearby. You must continue to empty this trap and set it again to be rid of your rats problem.

If the above doesn't solve your rats problems, you have three choices.

#1: You can use rat poison. One of the problems with rat poison is that the rats go somewhere to die. That might be inside your walls, air ducts, plumbing pipes and sewage drains. This could result in a more difficult situation than you ever imagined. Also, poisons are dangerous in homes with children or pets. If your pet or a neighbor's pet eats a rat that has been poisoned, the pet will be poisoned, too. In many areas, poisons may only be purchased by licensed contractors.

#2: Many cities and counties offer free vector control services. Call and arrange an appointment for an inspection.

#3: Call in a professional pest control and rodent exterminator company. Yes, it will cost money, but these services know what they are doing and should guarantee their work.

Cleaning Up After Killing Rats

Areas where the rats have been must be carefully disinfected with bleach, either by you or a professional exterminator.

Always wear rubber gloves and a mask that covers your nose and mouth when cleaning up rat droppings and rat urine.

Remember that every place rats have been can harbor fatal diseases.