The Lynx or Bobcat

The Beautiful Lynx or Bobcat

The north american Bobcat, or Lynx Rufus is rarely seen by man. So most people know little about the elusive animal. Hopefully this website will be a source of information on the incredibly beautiful Lynx for those that are curious and want to learn more.

The Bobcat is listed in Appendix II of the Convention on International Trade in Endangered Species of Wild Fauna and Flora, which means it is not considered threatened with extinction, but that hunting and trading must be closely monitored.

There is a subspecies of lynx that is considered endangered. The Lynx rufus escuinapae (the Mexican bobcat) is listed by the U.S. Fish and Wildlife Service. This subspecies is confined to central Mexico.

Beautiful head study of a Lynx or Bobcat

Have you seen a Bobcat or Lynx in the Wild?

The Bobcat looks much like other species of the Lynx genus but is the smallest of the four.

Its coat is variable, though generally tan to grayish brown, with black streaks on the body and dark bars on the forelegs and tail.

It is spotted patterning acts as camouflage.

The ears are black-tipped and pointed, with short black tufts.

Their color also varies by the region they inhabit. Bobcats in the desert regions of the southwest have the lightest colored coats, while those in the northern, forested regions are darkest.

Kittens are born very furry and already have their spots.

The face appears wide due to ruffs of extended hair beneath the ears. The fur is brittle but quite long and dense.

The nose of the Bobcat is pinkish-red, and it has a base color of gray or yellowish- or brownish-red on its face, sides, and back.

Bobcat eyes are yellow with vertical elongated black pupils that widen to help them see better at night.

Relaxing in a tree

The historical range of the Bobcat or Lynx Rufus

Where does the Bobcat roam

The historical range of the Bobcat was from southern Canada, throughout the United States, and as far south as the Mexican state of Oaxaca, and it still persists across much of this area.

This photo is of a Lynx in our Boise Zoo in Idaho, taken by me.

The Lynx you can love 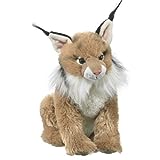 The Species of Bobcat - How many different types or subspecies are there?

There are twelve Bobcat subspecies currently known or recognized.

Below you will find their scientific names, the souces cited and the location where the subspecies is believed to range.

Which is a big reason why as you look at photographs of the lynx or bobcat, many of them look different.

I remember when I was painting the lynx you see at the top of the page, everyone was giving my different descriptions of what they "knew" a lynx to look like. Each one was probably correct, because all the subspecies and species of lynx vary in looks, with the common similiarities you see in all of them.

What does the bobcat eat?

They are meat eaters - Carnivores

The bobcat is a carnivore and has a diet of mostly meat.

They stalk their prey and then pounce on it, going for the neck for the kill like most of the big cats do.

Their most common diet is rabbits, hares, rats, rodents, squirrels, birds, fish, reptile and even insects.

Less commonly, they have been known to sometimes hunt foxes, minks, skunks, small domesticated animals and small livestock like goats, sheep and chickens.

What predators does the bobcat have?

Who eats the Bobcat?

So I bet you were wondering, just who hunts the elusive Bobcat?

The bobcat is often hunted by foxes, coyotes, owls, Cougars and wolves.

Sadly the kits are sometimes killed by male bobcat.

The largest threat to the bobcats existence come in the human form.

Bobcat track in the mud

Lifespan and Reproduction of the Bobcat

How long does a Bobcat Live?

Bobcats live on the average six to eight years. Very few live past ten years of age. There has been rare cases of a bobcat living as long as sixteen years in the wild and thirty two years in captivity.

Spring is the most common mating season for the bobcat. They breed much like the common house cat, with a female often having several different male mates. There is a lot of neck biting, howling and screams during breeding.

The female will have her kits often in a cave, or hollow log, any sheltered area will do. Her gestation period is sixty to seventy days. The lynx has between one and six kittens, with an average of two to four in a litter. The kits will open their eyes in nine to ten days and are usually weaned by two months. Though they will stay with their mother longer.

What kinds of things does a Lynx do?

The Bobcat is nocturnal, and does most all of it's activities at night.

They travel two to seven miles every day. There teritory is marked with feces, urine scent, and by clawing prominent trees in the area.

Like most big cats there territory is usually solitary, but they will often overlap. They may have more than one home within that territory, which usually consists of dens made in hollow logs, brush piles, thickets, or under rock ledges

They are usually known to be quiet except during mating season where their yowls and hisses can be heard.

The Bobcat in Mythology

How the bobcat got it's spots

According to Shawnee Indian lore, the bobcat got his spots due to an encounter with a rabbit that he had chased into a tree. The wily rabbit suggested that the bobcat build a fire in order to be ready to start cooking - once the fire was going, the rabbit jumped in its center and sent sparks flying so that embers landed on the bobcat. The rabbit escaped as the bobcat ran to the river to extinguish his coat, which the embers had left with telltale burned spots.

Badger carries Darkness: Coyote and Bobcat scratch each other

Coyote was traveling along. Badger always used to carry darkness on his back. Coyote met him. "My cross-cousin, what's in the bag you carry?" he asked. He was hungry and he thought Badger had food in his sack.

Because he thought there was food in there, Coyote wanted to stay around where Badger was and maybe get something to eat. So the two traveled on together for a way. Then Coyote was thinking he would offer to carry the load and let Badger rest.

Follow this link for the rest of the legend:

The First People - The Legends

This is from the Shoshone Bannock indians, the legend behind the reason they will not hunt the bobcat:

A trip to the Moon

Old Man and the roasted Squirrels

One time as Old Man was walking along, he came to a place where many squirrels were playing in some very hot ashes. While some squirrels lay in the ashes, others would cover them with even more ashes. When the buried squirrels became so hot that they couldn't take the heat any more, they would call out to the others, who would take them out at once. After Old Man had watched them for a little while, he asked them if he could play with them, too.

The rest of the story

Old Man And The Lynx

This story is also re-told as "Old Man And The Lynx"...

Old Man was traveling round over the prairie, when he saw a lot of prairie-dogs sitting in a circle. They had built a fire, and were sitting around it. Old Man went toward them, and when he got near them, he began to cry, and said, "Let me, too, sit by that fire."

The prairie-dogs said: "All right, Old Man. Don't cry. Come and sit by the fire."

The rest of the story

I hope you enjoyed learning with me about the Bobcat/Lynx. Please drop a note and leave your thoughts.

Thanks for stopping by,

Leave your pawprints here - And your comments