Elyn spent the last 30 years in China, coming home in the summer to cook American food and have fun doing craft projects with her family.

Do you need a small dog that doesn't shed and is both sweet and smart? Go no further!

This is an introduction to a sweet puppy in our family named Cricket. She isn't a cricket. That's just her name. She is a Miki dog, a new rare breed that is being developed in the US. Of course, we can't say enough good things about her. One of the best things is that she is an eternal puppy.

On this page your will find lots of cute photos, awww, and an introduction to the breed and their interesting characteristics, some fun patterns for small dog knitted outfits, and other toys that Cricket loves. You will also get to see a video of her crying when her Mom, whose name is Mika, left the house with the video camera going one day...

And who is the cute doggy with the Leprechaun? That's our sweet Miki puppy, Cricket!

Starting at the Beginning... Life before Cricket - We used to have two dogs - Bear Bear and Hermes.

Bear Bear is the dog sitting on the grass. She was born in Guangzhou China in 1993 on Valentine's Day. This puppy Valentine came to Nanjing, where we lived at the time, via a friend who had hidden her on the train in a basket, and eventually in 2003 traveled in the belly of an airplane to get back to the US. She was extremely intelligent, and could even do simple math. But that is another story.

Hermes, the dog on my lap, was our younger dog, and he was quite the naughty boy when he was little. He liked to shred toilet paper in the bathroom and run around as fast as he could, and believe me, that was fast. He would make circles in the back yard flying as fast as the birds. That is why he was named after Hermes, the Greek god with wings on his feet. I have to add that now he is a perfect gentleman. He is especially good with children, and likes to look after Cricket.

But that is getting ahead of the story. When Bear Bear died, our younger dog Hermes was really sad and confused. Life was pretty quiet at home during the day when everyone was gone. No one to play with. No one to hang out with. No one to make life interesting.

So the search began for a new member of the family. The only trouble was that Hermes had a bad back, and the Vet warned us that we should make sure to get a smaller dog, because if a larger dog were to play roughly with Hermes, it might turn out to be a huge problem for his back. Hermes was small already at 12 pounds. What dog is non-shedding, smaller than 12 pounds, and light as a cricket? Our new dog also needed to be a loyal friend for all of us. And then we discovered about Mi-kis and met Cricket...

Our solution was a Miki puppy. - There were two in the litter. Can you guess which one he chose?

We took Hermes out to the breeder's house. She had so many Miki dogs it was amazing. But on the day we took Hermes, there were just the two babies there for him to meet. They were both very sweet, but he definitely liked one better than the other. So that was the puppy his Mom, Mika, chose too. Then both Mika and Hermes had to wait until she was 8 weeks old before they could bring her home. That was a hard wait. Answer: He took the one on the right. That is our little Cricket.

What is a Miki Dog?

The Miki breed has its roots in Papillon, Japanese Chin, and Maltese breeds

Miki - A bit of breed history

Have you ever wondered how a breed is recognized by an official kennel club like the American Kennel Club? It is quite a long and drawn out process involving keeping records of all the dogs in the breed over a very long period of time. The Miki is one of the newest breeds around, and there are several Miki Clubs that are starting to collect all the details necessary for recognition as a breed by the American Kennel Club. It is important to know that Miki is also written "Mi-Ki."

Here is all the breed history you will need:

Life Span: Into their teens

And yes, Mikis are hypoallergenic.

What we love about Cricket - Let me count the ways...

She can imitate Ice Age's Sid

She is little and walks softly.

She likes to play fetch (most Mikis do) and roughhouse.

She talks with little peepy noises and she yodels. Check out the video.

She loves our family. We love her too. A lot.

She loves to sit in my lap. Anytime. Anywhere.

You can take her with you easily, even on a plane.

She has mobile and flying ears.

She can get scruffy and sometimes looks like "Animal" in the Muppets.

She is like a cat in many ways, and is clever at using her feet.

She squashes on the top of the sofa and looks flattened like a pancake.

Cricket also does an impersonation of Animal from Sesame Street

Sometimes she gets really dirty and has a bad hair day. Then she can look like "Animal."

Knit your own Dog Sweater books - Small dogs get cold easily. Making them sweaters is a way to keep them warm in winter.

Cricket's sweaters come from this book. Do you like her outfits? 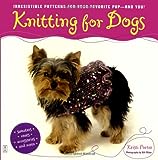 Knitting for Dogs: Knitting for Dogs
There are lots of books out there, but my daughter the knitter likes this one. The sweater with the green and white stripes that Cricket wears is the same pattern that is shown on the cover.
Buy Now

Knitting sweaters for dogs - The ins and outs...

Here she is in her custom designed sweater by Mika. Isn't it a beauty? If you are a good knitter, you can really make your creations fit well. If you are a beginner it will be more difficult. I am glad that Cricket's Mom Mika is a good knitter and I don't have to do anything. In fact, my feet are in fancy warm socks for the same reason that Cricket has so many pretty sweaters - thanks Mika!

If you knit sweaters for your dog, you can use up odd bits of wool. You can keep your house a little cooler, and it won't be a problem. With Mikis you need to be careful if you keep their hair short. There isn't much to a Miki and it is easy for them to get cold. Sweaters are a great part of that solution.

The green sweater used the pattern called "Sequined Princess Sweater" and is on page 40.

Mikis talk a lot. They can be very vocal. - It sounds like a sweet chirp.

She was so verbal when we were around we wanted to see if she talked when we were away, and were horrified to see that she cried like a baby. She had the nickname Le Peuw after Pepe le Peuw, because she would go around making little chirping noises - pew pew pew.

A Miki by any other name would be as sweet...

Cricket is called all these and more by her family.

Little Girl - because her brother Hermes was Big Boy.

Princess - She is called this because she presents her feet to you to be kissed. Who else but a princess would want you to kiss her feet!

Stinky - One of the Miki breed traits is needing to have their teeth cleaned or else they get a stinky mouth. When Cricket was little, she had very stinky breath until we got her teeth cleaned.

Le Pew - Named for her sweet peeping chirpy noises she made when she was little: pew pew pew. Also called this when she carries underwear around in her mouth!

Ququ -- This is "Cricket" in Chinese. She is bilingual because we all speak English and Chinese too. Ququ is not a sound we have in English but comes closest to "chew chew."

with two dots on top like in the German umlaut.. Mikis do something called "ear winging." - Is it like a fairy? Using the ears to fly? Or is it more like "ear swinging"??

Mikis are known for their extremely mobile ears. They can send them forward and back, and after a while you can read their thoughts a bit by watching their ears. This is a photo of a Miki named Jenny winging her ears. Our Cricket has ears that basically stand up, but can go down too. She is always winging her ears around. Photo courtesy of Paddington's of Mi-ki Breeders USA, Inc.

A Miki winging it! - (yes, I did this cartoon myself)

Cricket makes a good model - In this photo she was illustrating the famous kid's song...

Give the dog a gnome!

Where does your dog sleep? - The safest place on the bed?

Cricket likes to sleep up by my face. At first I wasn't too used to it, but it was the safest place on the bed for a small doggy. In the winter it helps to have her up there keeping the cold breezes from going down the covers.

What we use when Cricket gets sick...

Homeopathy World Cat and Dog Pack - Book plus Homeopathic Care for Cats and Dogs
We believe in homeopathy. It works. For both Cricket and us. This kit has a book to go with it.
Buy Now

Some fun links about Mi-kis Cricket has a big brother and sister - I couldn't leave them out... Xixi and Hermes

The larger grey fellow is Hermes, named after the Greek god who has wings on his feet... you might guess that he can run really fast. He is a gentleman, and loves children. Half Yorkshire Terrier and half Shitzu, he is bigger than either of his parents, even though he was the runt of the litter. Cricket's older sister is the pure white doggy, and her name is Chinese. It is pronounced she-she, but is spelled Xixi, which means "fine," or "delicate." She is quite independent, and doesn't mind being by herself in the living room when everyone else is in the kitchen. She's a cutie.

Cricket is sitting in my lap waiting to hear from you! - Please feel free to leave your comments