The Amazing Peacock: Facts and Photos

How much do you know about peacocks?

From their dazzling coloring to their distinct and haunting calls, I've always been intrigued by peacocks, but suffered from never knowing anything about them.

Most of us don't live with peacocks roaming around, and only get to see them once in a while; at the zoo, on vacation, or maybe at the botanical gardens. It's easy for many of us, or at least for me, to think of peacocks as walking displays of art found at zoos and really cool parks.

The other side, of course, is that they have families, raise chicks, forage for food, strut around forest floors and by rivers, and fly up to the treetops to evade predators at night.

Though they're very beautiful birds, they can be quite destructive en masse. When they're overpopulated, peacocks can be extremely loud, and they'll eat the flowers out of flower beds, scratch cars with their talons, and cause general mayhem and mischief.

There is more to peacocks than meets the eye--though that certainly is a tantalizing aspect of them, isn't it?

Here are some facts and amazing images to go with them. I am by no means a peacock expert, but through my research I have learned quite a lot.

Where Peacocks Are Found 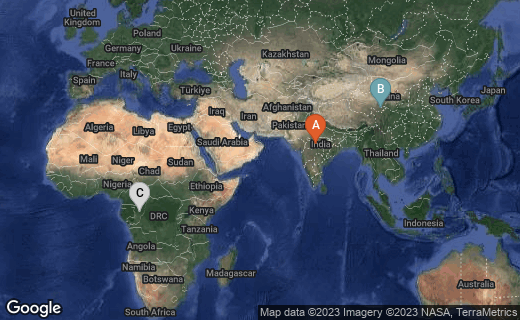 There Are 3 Main Species of Peafowl

Peacocks (males) and peahens (females) are actually technically peafowls. Peafowls are of the genus Pavo in the pheasant family of birds, Phasianidae. Peahens are more plain, which is probably why we know these birds as peacocks and not peahens. Peacocks are basically very fancy male pheasants that have evolved to attract the females' attention with their enormous and beautifully colored tail feathers. Scientific studies have shown that, when given the choice, a peahen will choose as her mate the peacock who has the most "eyes" in his tail feathers.

There are 3 main species of peafowl:

For example, the "pied" peacock varieties have a more blotchy appearance, displaying large areas of white intermixed with normal coloring.

There is an amazing array of color combinations that most people don't know about. If you're interested, there is a comprehensive peacock varieties database here that includes information and photos. I was amazed to find purple peacocks! But there are many types, and I found all of them beautiful.

The Distinct Call of the Peacock

If you've ever heard a peacock's call in person, you might not easily forget it. I clearly remember walking through a subtropical botanical gardens and in the distance hearing a lone peacock calling.

At first I thought it sounded kind of like a baby crying. Later I realized it was a peacock, and ever since that moment I've been almost transfixed by its haunting call.

Though I generally think of one call in particular when I think of peacocks, they actually have a range of up to 11 distinct calls. Their voices carry long distances, and to me at least, this often leaves me with an almost ethereal feeling as the call echoes across space.

To some it's considered raucous and jarring, but to me the call of the peacock will always be linked with beautifully lush landscapes and an almost primitive attraction to the habitats they frequent. It's not just the call itself, but the embodiment of the entire scene: the white clouds, deep blue sky, twittering birds, babbling brooks, exotic flowers, and lush green plants. Through it all you hear the beautiful peacock--a summation of all that's beautiful and exotic in this world.

The poor peahen is often overlooked because she is so plain compared to her mate.

However, she plays a huge role and can be thanked for the beautiful displays we see in the male peacock. She selects the most intricately colored and designed males and perpetuates these designs through her offspring.

In India, the peacock mating season coincides with the monsoon season (April-July.) Since the peacock calls loudly during the mating season, this mewing or crying sound has translated literally to mean "there will be rain."

After mating (the male's cloaca transmits sperm to the female's cloaca), the peahen will lay an egg each day until she fills her nest with 3-7 eggs.

She'll also lay unfertilized "decoy" eggs that she'll place away from the nest to confuse predators. The eggs hatch in about 28 days. The hatched peafowls resemble young turkeys, with yellow and brown markings.

They're born fully feathered, and are often ready to fly within a week, and can forage within 3 days of hatching. The mother will usher them into the trees for protection, where she will protect them from weather by covering them with her wings.

The young peacocks' colorful tail feathers won't fill in until they're about 3 years old. From then on, the tail feathers molt (fall off and are replaced) once each summer.

This is by far the most popular, and perhaps the most beautiful, of all the colored mutations. This peacock has the same enormous tail feathers as its relatives, but without an ounce of color: the whole bird is pure white.

I admit that before doing research I'd thought these were albinos, like most people do. In fact, they have something called leucism. Leucism is when the cells lack the ability to make any pigment whatsoever. In contrast, albinism is when an animal can't produce melanin.

These birds, and in fact many of the 55+ peacock mutations, are maintained through selective breeding. Much like wolves were bred over time to resemble everything from a dachshund to a saint bernard, peacocks have been bred over time to display many different colors and patterns.

I admit the leucistic peacock is one of my favorites. I love black and white photography because there is such a crispness of lines and lack of anything to sully the outline. There's something fantastic and pure about the white peacock. So fantastic, in fact, that I need to include a large image for you.

Interesting Facts About the Peafowl My favorite color of peacock is