There are over 500 hundred species of pistol shrimp documented thus far but only a handful that reach the marine aquarium hobby with any regularity. Some even come in as hitchhikers on live rock. Pistol Shrimp are generally small marine Aquarium Shrimp with sizes ranging from half an inch to two inches.

All pistol shrimp have one (Or sometimes two) oversized claw that create a cavitation bubble as it snaps shut. This bubble, very briefly reaches temperatures approaching that of the sun, about 4700 degrees Celsius. A loud "popping" noise is created as well. I've personally been shot by a randall's pistol shrimp a number of times and the pain generated is much like getting hit with a rubber band. It was a small area effect blast rather than a specific point. It should be noted that i got shot as i was handling it out of water. I don't know if it would've hurt more underwater and i'm not about to try.

Their claws are used for both offence and defence. If you view the video to the right you can see how it is used to stun a cleaner shrimp. While they do use to on their prey (small shrimp) they are also known as excellent scavengers in the marine aquarium.

They commonly build burrows in the sand and have been known to tunnel underneath the live rock. Therein lies the danger. If your live rock is not properly secured, the entire foundation can collapse. Nevertheless they perform a great service in aquariums with sandy substrate as they constantly turn over the sand ensuring it is clean. Some species of pistol shrimp are even found associated with sponges.

By far the most interesting aspect of pistol shrimp are their ability to form a symbiotic relationship with some species of goby fish. This is commonly seen in pistol shrimps belonging to the genus Alpheus such as the tiger pistol shrimp and Randall's pistol shrimp.

Both parties benefit from the relationship. Pistol shrimp naturally have very bad eyesight and rely on the goby to warn it when danger approaches. It does this by keeping in constant physical contact with the goby by resting its antennae on the goby's tail and body.

Ever watchful, the goby will normally be seen on the look out while the pistol shrimp goes about its business digging and scavenging for food until it receives a warning from the goby. This is illustrated in the video showing my randall's pistol shrimp + Yasha goby pair. They've been with be for a half a year now and are always a joy to see together. 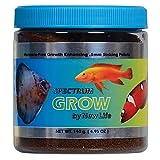 Feeding the pistol shrimp is extremely easy as they are very receptive to just about any fish food offered. They are also able to detect food fairly well once it enters the water column.

Nothing fancy is required to feed, some simple sinking pellets will do just fine. New life spectrum, formula one pellets or any other brand that has a good mix of seafood are good choices.

Frozen foods such as mysis shrimp, brine shrimp and other meaty mixes are readily eaten by them as well.

Here are some gobies that will pair up with genus Alpheus pistol shrimp.

This isn't a complete list but it should give a general idea of some common marine goby's that do pair up.

Pairing them is a very simple process. They will pair up immediately upon meeting. But first, they have to meet. If your pistol shrimp is on one end of the tank the goby is on the other, you may have a problem.

I always try to put in the pistol shrimp to a location of my choice first. I let it burrow around for 10 minutes and then i release the goby right outside the burrows entrance. The goby should make a mad dash for the burrow and they will pair up.

They are sometimes sold as pairs at your local fish store or even online stores. If you're interested in purchasing a pair, some recommended online retailers include

But you don't need to buy them as a pair since pairing them up is so easy.