A Puggle comes from a cross between a pug and beagle. They are often very cute, with drooping ears and a wrinkled forehead. They are also the latest designer-dog fad. Many venues, from celebrities to dog food brands, are putting this new and interesting "breed" in the limelight. However, the puggle is not a breed. In this lens you will learn about puggles, why they are not really a breed, why you shouldn't pay a pure-breed price for them, and how to get a puggle for yourself, guilt free.

The Difference Between Pure-Bred and Designer Mutt

The difference between puggles and pure breeds is that puggles don't have one important factor: Predictability. How big do puggles get? Will a puggle be good with kids? Can this puggle go jogging with me? The straight answer is: Who Knows? Both pugs and beagles have been bred over hundreds of years for certain traits. They have a certain look, a certain temperament (or way of acting), and a certain purpose. They also have certain health issues. Puggles are a cross of both of these specific breeds, and they can end up with any combination of either breed's traits. Most of these combinations are harmless, but some can cause or even create new problems with temperament or health. We will look at this in more depth in a bit.

Why Puggles Aren't Worth Their Prices

You might be thinking "So What? Even with all these weird genetic combinations you are talking about, a puggle is just as good as any other dog!" That is my point exactly. Puggles are essentially regular, run-of-the-mill dogs you might find at a shelter. Like shelter dogs, you don't know what you will get. Most of the time you end up with a sweet, playful, loving best friend. The point I want to get across is that this kind of gamble isn't worth hundreds or even thousands of dollars.

Let's talk about the pure-bred parents of puggles.

Much of the time, both pugs and beagles are bred for show.

One phrase you hear show breeders say a lot is "Improve the Breed."

This motto of these staunch and often rather snobbish show breeders means several things:

1. Conform to the breed standard.

A breed standard is a written list of all the traits, both physical and tempermental, that breeders should try to conform to. Breeding to this standard creates that level of predictability I was talking about before. With a half-bred dog, such as a puggle, there can be any combination of traits.

This is not as simple as it seems. Show breeders often extensively test for genetic and sexually transmitted diseases on their dogs. These tests are very expensive and aren't always available at every vet. This is part of the reason that pure-bred dogs are so expensive and a reason why puggles aren't worth that price.

3. Keep Track of the Puppies!

Responsible breeders will also screen potential adoptive parents for their puppies. The reason for this is so that the new owners won't go breeding their dog with any other dog. This would go against improving the breed. Every breeding for a show breeder is to improve the previous generation with careful matches of good traits. If one of these prized pups were unscrupulously bred (say with another breed), that could cause puppies that have all those bad genetic issues we were talking about. Often there are clauses in the contract for purchasing a puppy that under no circumstances will that puppy ever be sold or relinquished to a shelter without the approval of the breeder. If anything is genetically wrong with the puppy, the breeders often promise to take the puppy back or pay part of whatever medical bills are required to care for it for the rest of its long and probably fairly happy life.

Why it Could be Harmful to Buy a Puggle

The motivation of puggle breeders is to make money. Nothing Else. There is no breed standard for a puggle. Puggles do not have a traditional job, like beagles. They can't participate in shows. This means that puggle breeders probably won't spend the money to do testing on the parents. They probably won't be selective about the parents, so long as they at least look like a pug and beagle. They won't give you a health guarantee, because they want to sell the dog and be rid of it forever. If the dog has some genetic disease that costs thousands of dollars at the veterinarian, the breeder won't be obligated to help.

Buying a puggle will put money in these people's pockets, causing them to pump out more and more puppies that may be unhealthy or poorly tempered. As a result, more shelter dogs will not be adopted, and more puggles will become shelter dogs. On the whole, more dogs will be euthanized in shelters by supporting puggle breeders financially.

Put it All Together and....

What if you get a puggle with the beagle's hunting instinct to run and chase, as well as the pug's lack of direction? That is a recipe for a lost dog.

How about the pug's strange vocalizations with the boredom driven baying of the beagle?

Maybe a short little nose always pressed to the ground sniffing? That could be messy.

Some of these combinations just aren't complementary, and need to be considered, especially when a puggle costs hundreds of dollars.

What about Hybrid Vigor?

Hybrid vigor is an argument lots of people use to support the purchasing of mixed breed dogs. What this really means is that the First Generation hybrid doesn't usually succumb to genetic diseases that the parents would be susceptible to.

In basic genetics, a bad gene is what causes a genetic disease. A dog gets two copies of almost every gene, one from the mom, and one from the dad. If a dog only gets the bad gene from one parent, then the dog probably won't get the disease. It can still pass on this gene to it's puppies!

One of the reasons for hybrid vigor in puggles is that pugs and beagles have different genetic diseases. Pugs get Hip Dysplasia and Progressive Retinal Atrophy. Beagles get Pyruvate Kinase deficiency and Musladinleuke Syndrome.

Lets say that there is a pug and beagle. The pug is a carrier of PRA (meaning it just has one copy of those bad genes and doesn't get sick) and the beagle is a carrier of PK. They breed and have puppies. There is a pretty good (25%) chance that any given puppy from this pairing will be a carrier for BOTH diseases, even though the pup probably won't suffer from them. This means that the puggles have TWICE as many genetic diseases to look out for as any other dog. The second generation will likely be very sick, if two of those carriers have puppies. We can add this to the fact that we have already established that puggle breeders are unlikely to test for genetic disease.

It would be great if every single puggle owner neutered and spayed, so there would never be a second generation, or if every breeder did comprehensive genetic testing, but that just isn't the case.

Genetics is also still a difficult subject. Not even the leading scientists know everything there is to know about genetics. Some genetic diseases may manifest in certain negative ways even in carriers. Sometimes only one copy of a gene is enough to make a dog partially sick. It's a lot of responsibility to fiddle with genetics. Not everyone who breeds is ready to deal with the possible consequences.

Adopt! Any dog in a shelter has just as much potential to be a wonderful loving companion as a puggle you pay $2000 for. They are also perhaps facing death if they don't find an owner.

Depending on the shelter, you can keep checking in or ask them to call you if they get a puggle. This is not unusual, because of the recent puggle fad. Lots of people who bought into it last year will now find their puggles one year older and a bit less cute. You can even go to a puggle rescue to get a wonderful puggle companion.

Do you Agree With This Message? 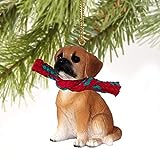 Tell me what you think of the Lens!