The Rough Green Snake is the only type of Green Snake that inhabits Louisiana. It is a slim, medium sized, non-poisonous snake, which is bright green in color. Rough Green snakes are egg layers and are excellent climbers. This beautiful little snake will help rid your garden of harmful insects.

Adult Rough green snakes are bright green in color and have slim, vine-like bodies. Maximum length is 45 inches. The belly is yellowish and they have rather large eyes. Baby Green snakes are grayish green.

Rough Green snakes are active during daylight hours in warm weather. They are found in forested areas often near rivers and streams. They are nearly invisible and often remain unseen because they lie motionless when they are entwined in vines and bushes.

A life-like figure which could be used when studying or learning to identify the species.

Prey consists primarily of insects and insect larvae, but also includes millipedes, spiders, land snails and small treefrogs. These snakes hunt by sight and are another wonderful member of the earth's natural pest control crew. They usually capture and swallow their prey alive, but may chew some on active prey to subdue them before they are swallowed.

In my opinion this is the best identification book for snakes of the Southeastern United States. Wormsloe Foundation published many excellent guides.

Most mating occurs in spring, but Green Snakes will also mate in fall. From 3-12 eggs are laid by the female under rocks, in rotten or hollow logs, or in other concealed, moist locations. Often several females will lay their eggs in the same place. 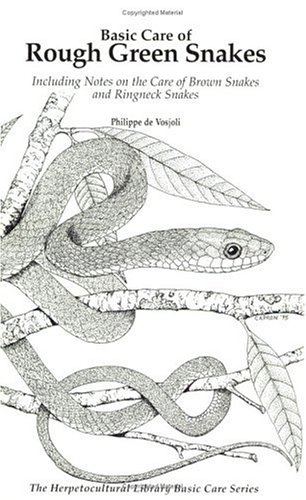 Some enjoy keeping snakes. This book will help them feed and care for rought green snakes in the proper way.

Predators include birds, spiders and other snakes. Rough Green snakes are well camouflaged when they lie motionless, entwined in vines or in the branches of bushes. When threatened or captured green snakes may open their mouths, but seldom bite.

Since Green snakes eat insects, pesticides will diminish their food supply. Development near streams and rivers that destroys the shrubs, vines and bushes where Rough Green snakes live reduces habitat where they live. In addition, Green snakes are often killed trying to cross roads near wetland areas.

Dover coloring books are quality productions using heavy white opaque paper, with first-rate artwork and informative text and captions. Many appeal to adults as well as children. Teachers love them and appreciate being able to copy illustrations on office copiers for classroom use. Designers and craftspeople also use them because the illustrations in most Dover coloring books can be reproduced in design or craft projects without permission or fee.

Some of Our Snake Stuff on Zazzle

The latest addition to DK's popular series of book-and-CD packages introduces young readers to two favorites from the DK Reader's series. Perfect for the car, at bedtime, or anywhere. Book includes photography, prints, diagrams, and maps to enhance the classic tale. More than 60 minutes of audio. Simple text helps children improve reading skills while they listen