Shorebirds to see in San Diego

All of the photos in this lens were taken by me unless otherwise specified. The photo for this module is of a least sandpiper at the South Bay Salt Works in Chula Vista.

Black-bellied plovers are one of my favorites. They are they largest of the plovers. Though you can't see their black bellies in this photo, they do get them as breeding season approaches. During breeding season, their bellies and chests are totally black, outlined with white and their back and wing feathers are black with white ends. They look very similar to American and Pacific golden plovers, but with more white and gray than gold to their feathers. There is a photo in the slideshow that shows them transitioning into their breeding plumage.

The best places to see these birds is any place where there is sand to roost and mud flats to feed on. In fact, most plovers prefer that kind of habitat. I've seen them mostly in the south bay and in the San Diego River mouth.

Whimbrels and long-billed curlew are fun winter visitors to watch. They usually like brackish or salt water areas like river mouths and bays. This photo was taken in the San Diego River mouth, but I've also seen them at Famosa Slough and the South Bay.

There are two types of dowitchers that visit San Diego. One is the long-billed dowitcher, like this one, are more likely to be seen inland and near fresh water. The other is the short-billed dowitcher which tends to be seen in salt and brackish water. It is very hard to distinguish the two in their winter plumage. As breeding season approaches, it becomes easier to tell the difference between the two.

Marbled Godwit - And, a least sandpiper

Here are a few products I've picked out related to shorebirds.

Shorebirds of North America, Europe, and Asia: A Photographic Guide
This book has a ton of shorebird photos from all over the world.
Buy Now 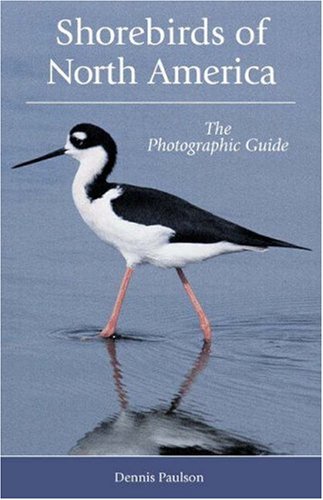 Black-necked stilts live all year round in San Diego and they even breed here, too! I've seen them breeding at Famosa Slough. Also, in the San Diego South Bay, there are usually a lot of these birds, especially in the winter. Here is a male stilt guarding a nest.

American avocets live and breed here in San Diego all year. In the winter, their necks are white, but during breeding season, their necks turn red. Males have a straighter bill and females a more curved bill. This family was seen at the Del Mar Fairgrounds where there is a slough that goes around and near the racetrack. I've also seen avocets in many other places including the San Diego Bay.

This photo was taken on Fiesta Island, but they like to be everywhere in Mission Bay. Hundreds of them hang out in the South Bay in the winter.

Snowy plovers live in San Diego all year around and are a local favorite. The kind that live here are the threatened western subspecies. You can see snowy plovers in the San Diego South Bay and a few other places. It's best to observe them before breeding season as part of the beaches and sloughs are roped off so they can nest. Even standing nearby can be a disturbance to them. In order to better identify shorebirds, especially in winter plumage (which many of the shorebirds in San Diego are), you need good optics. Birding scopes range in price from less than $100 to several thousands. Here is one of the best ones around. The Swarovski brand has an excellent reputation as being top notch.

Swarovski Spotting Scope HD ATS-65 High Definition Glass (Eyepiece sold separately)
This one even has a choice of eyepieces and is excellent even if you wear eyeglasses. It's not a beginner's scope, but it's one of the best on the market.
Buy Now