Patron Saint of animals and the environment!

A legend tells that in the city of Gubbio, where Francis lived for some time, there was a wolf “terrifying and ferocious, who devoured men as well as animals.

Francis had compassion upon the townsfolk, and went up into the hills to find the wolf. Soon fear of the animal had caused all his companions to flee, but the saint pressed on and when he found the wolf he made the sign of the cross and commanded the wolf to come to him and hurt no one. Miraculously the wolf closed his jaws and lay down at the feet of St. Francis.

"Brother Wolf, you do much harm in these parts and you have done great evil"; said Francis. "All these people accuse you and curse you; But brother wolf, I would like to make peace between you and the people."; Then Francis led the wolf into the town, and surrounded by startled citizens he made a pact between them and the wolf.

Because the wolf had; done evil out of hunger; the townsfolk were to feed the wolf regularly, and in return, the wolf would no longer prey upon them or their flocks. In this manner Gubbio was freed from the menace of the predator. Francis, ever the lover of animals, even made a pact on behalf of the town dogs, that they would not bother the wolf again.

This is just one tale of the good deeds of St. Francis of Assisi. A friend of animals, the environment and the natural world!

Throughout the World organizations and churches hold Blessings of the Animals around St. Francis of Assisi Feast Day. Learn more about Animal Blessings and find a blessing near you!

Who is St Francis Of Assisi!

Saint Francis of Assisi (September 26, 1181 - October 3, 1226) was a Roman Catholic friar and the founder of the Order of Friars Minor, more commonly known as the Franciscans.

He is known as the patron saint of animals, birds, and the environment, and it is customary for Catholic churches to hold ceremonies honoring animals around his feast day of October 4.

His father, Piero Bernardone, was a prosperous merchant. In 1201 he took part in an attack on Perugia, was taken hostage, and remained a captive there for a year. As a result of his captivity and a severe illness his mind began to turn to religion. It was then that, he had a dream of God calling him to his service, and he returned to Assisi where he began to care for the sick.

In 1206, he had a vision in which Christ called him to repair His Church. Francis interpreted this as a command to repair the church of San Damiano, near Assisi. He resolved to become a hermit, and devoted himself to the repairing of the church. His father, angry and embarrassed by Francis' behavior, imprisoned him and brought him before the bishop as disobedient.

Francis abandoned all his rights and possessions, including his clothes. Two years later he felt himself called to preach, and was soon joined by companions. When they numbered eleven he gave them a short Rule and received approval from pope Innocent III for the brotherhood, which Francis called the Friars Minor.

The friars returned to Assisi and settled in huts at Rivoreto near the Porziuncula. They traveled throughout central Italy and beyond, preaching for people to turn from the world to Christ.

In his life and preaching, Francis emphasized simplicity and poverty, relying on God's providence rather than worldly goods. The brothers worked or begged for what they needed to live, and any surplus was given to the poor.

Later he gave up leadership of the Order and went to the mountains to live in secluded prayer. There he received the Stigmata, the wounds of Christ. He returned to visit the Franciscans, and Clara and her sisters, and a few of his followers remained with him. He died at the Porziuncula on October 3, 1226.

Francis called for simplicity of life, poverty, and humility before God. Thousands were drawn to his sincerity, piety, and joy.

Watching over your pups!

Good St. Francis, you loved all of God's creatures. To you they were your brothers and sisters. Help us follow your example of treating every living thing with kindness. St. Francis, patron saint of animals, watch over my pet and keep my companion safe.

The Prayer of Saint Francis is a Christian prayer for Peace widely attributed to the 13th century saint Francis of Assisi, although the prayer in its present form cannot be traced back further than 1912, when it was printed in France in French, in a small spiritual magazine called La Clochette (The Little Bell), as an anonymous prayer, as demonstrated by Dr Christian Renoux in 2001. The prayer has been known in USA since 1936.

Lord, make me an instrument of Thy peace;

where there is hatred, let me sow love;

where there is injury, pardon;

where there is doubt, faith;

where there is despair, hope;

where there is darkness, light;

and where there is sadness, joy.

grant that I may not so much seek to be consoled as to console;

to be understood, as to understand;

to be loved, as to love;

for it is in giving that we receive,

it is in pardoning that we are pardoned,

and it is in dying that we are born to Eternal Life. 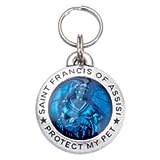 Be sure and visit my website - JohannTheDog.com - where you can shop for cool stuff for cool dogs!

We've put together, in one place, all the cool stuff you need for your dog!

And the best part is we donate 10% of our profits to dog rescues and shelters!

Give me some woofs!