The Victorian Era brought about many changes that have influenced the people of today. One of which is the household cat. The Golden Age, 1850 to 1910, has brought to us a rich knowledge of agriculture, science, arts and entertainment and all of this has influenced how we feel about our beloved cats.

Darwin's study of evolution and genetics swayed the Victorian's interest in domesticating cats. Darwin pointed out that the difference between the domestic cats of India and South America compared to those of Europe and North America is in appearance. He stated, "apart from the Manx and Persian, there was no variation in the breed other than color." From this point the household cat became a subject for scientific investigation.

In England, at the Crystal Palace show in 1871, Harrison Weir, an artist and lover of cats, listed the permitted breeds of Black, White, Tabby, and Longhairs.

In 1895, at Madison Square Garden, the first American breeds show was held. They named several varieties as, Angora, Russian, Persian, Indian, Siamese, and the Manx.

Today's cat is a beloved pet in most households all over the world. The top selling calendar is the cat! In fact most anything with an image of a cat on it sells. If it had not been for the beloved Queen Victoria, the cat of today may not be in the splendid spotlight of adoration. Before Queen Victoria, who reigned in England for 63 years, the cat's station in life was merely a task of pest control. Their biggest job was to keep graineries from mice. In the Middle Ages they were often viewed as being associated with the devil's work; a "familiar" for the practice of witchcraft. Rarely, was a cat allowed into the house-except for the cellar or attic.

The Victorian's interest in archaeology uncovered a fascinating find in Egypt. An Egyptian Princess' grave was found where she and her ten well-beloved sacred cats were buried. Also in 1890, more than 300,000 cat mummies were found buried in an underground sanctuary at Ben Hassan. It was discovered that this was a site where a temple was resurrected dedicated to the cat goddess Bastet. The mummified cats had been placed in small cases. And beside the mummified cats were mummified mice; food for the long journey to the afterlife!

Queen Victoria's fascination with this beloved sacred animal led her to bring in two Blue Persians and cherished them as household members. The new worth and novelty became important to the Victorian's in England and soon made its way across the ocean to the United States. Interest in new varieties of breeds were exhibited in department store windows.

In 1890, Godey's Lady's Book, most popular lady's books of the 19th century, announced that a woman does not have to be an old maid to "appreciate the beauties and love the virtues of her feline companion."

If you love cats, then you will enjoy reading these suggested books. My personal favorite is "A Curious History of Cats." And if your a fascinated about how society has viewed the cat in literature, a must read is "99 Lives: Cats in History, Legend, and Literature." This book tells stories of holy cats, psychic cats, lucky cats, and cats of famous real life cats. This book is loaded with 140 photos and illustrations. The secret lives of cats in both Ancient and modern times is told. 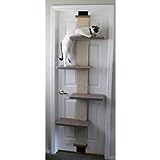 Here to sit by me

New Breeds were Introduced in the Victorian Era

The cat was both venerated and persecuted throughout history until the Victorian Era. The importance and continued love of the cat was significantly furthered by two important Victorian developments: the improvement in the treatment of all domesticated animals and the enthusiasm for exhibiting and breeding varieties of cats. This image was taken at the very first cat show at the Crystal Palace in London, England on July 13, 1871. In 1885, as a gift from the King of Siam, two Siamese cats were gifted to Owen Gould, the British Consul general in Bangkok. This was considered a new imported breed.

During this time in the 1880's, the enthusiasm for breeding and exhibiting cats began to spread. Breed standards were adopted. France, Belgium and Holland were the first European countries to organize cat shows. The first American show was staged at Madison Gardens in New York City in 1895.

Literature and the Love of Cats

Both the American and English writers in the Victorian era were great lovers and admirers of the cat. Some of the staunchest defenders for the cat included, William Wordsworth, John Keats, Alfred Tennyson, Thomas Hardy, Mark Twain, and Henry James. Rudyard Kipling added "The Cat Who Walked by Himself", to the world of cat lore.

The Victorian playwright and antiquary James Robinson Planche wrote a single line that he was remembered for, "It would have made a cat laugh." Edward Lear, artist and author wrote, "The Owl and the Pussycat". And who can forget the cheshire cat in "Alice in Wonderland", by Lewis Carroll.

Cats were the constant companions to the Victorian writers. Algernon Charles Swinburne writes, "stately, kindly, lordly friend, condescend. Here to sit by me." Beatrix Potter spent her childhood with many cats. In her journal she writes, "one day puss did not take his place punctually, but presently appeared with two mice, one of which he placed on his master's plate, the other on its own."

The Man Who Drew Cats

Louis Wain is one of the most celebrated victorian illustrators who drew cats anthropomorphized in human activities. His art grew in popularity and could be seen from advertising, post cards, to children's books. He became so prolific, that by the age of 40 years old he was painting approximately 600 cat illustrations in a year.

If you are not familiar with Louis Wain you will especially enjoy seeing his wonderfully imaginative work. He is one of my personal FAVORITE cat artists. I never tire of seeing his work!

The Cats Victorian's Fell in Love With! - AND YOU WILL TOO!

These are my personal favorites. I have purchased all that I am showing you here. I really enjoy looking at and reading these books from time to time. They make me smile and sometimes laugh out loud. Louis Wain has depicted the cat in art that has fueled our imaginations to delight in so much fun. 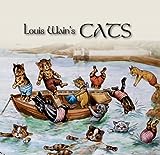 Louis Wain's Cats
This is my number one favorite book. For what this book offers you are not paying very much. The author, Chris Beetles is a fantastic historian, who shares with us the beautiful life of Louis Wain. The artist himself had a colorful and tragic life. You will enjoy reading this book as well as the thousands of paintings that have been color reproduced with perfection.
Buy Now

Set of 6 BRAND NEW Louis Wain "Cats" One Inch Magnets
These are very fun! Use these to put notes on the refrigerator or any thing for that matter. Wonderful images that will always delight your senses!
Buy Now 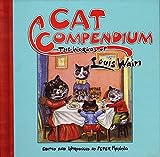 Cat Compendium: The Worlds of Louis Wain
I just purchased this book. It is a VERY affordable book if you want to have one book of some of Louis Wain's work.
Buy Now

Louis Wain Illustrated Cats Boxed Cards
If you are a cat lover you will enjoy these greeting cards. Some of Wain's "sweeter" works. Great imagination and enjoyment can be shared when you send a friend one of these cards.
Buy Now

The Owl looked up to the stars above,

And sang to a small guitar,

Why Did the Victorians Anthropomorphic The Domesticated Cat?

The late 1800's cats took on not only physical but also character traits of human beings. Dressing your cat was thought to be making it more domesticated. Cats were considered to be sexual creatures. Covering their bodies was a natural reaction to following the puritanical code of the day.

All kinds of individual people were characterized by cats. Cats could represent all distinctions of intelligence, class and morality. Aiming cats as adult humans lead a gateway for satire. Giving human characteristics to cats could help reveal the truth about certain individuals.

The portrait painter of the Queen's animals, Sir Edwin Landseer, influenced the portraits of animals to be seen in Victorian homes.

The cat was the perfect creature to satisfy the curiosity and longing for domesticity in the Victorian home and lifestyle.

Write and share your stories about your feline friend. And follow me daily with more cat fun.