I did a few projects in polyester resin and epoxy resin but due to the lack of space and an adequate working environment I decided to avoid them. I generally work with Jesmonite for most of my simple projects,

I had some research to do for a project for a customer in the UK, I decided to practice making a cube made from composite materials to look like vintage steel, a rusty iron cube. the final project was to make a large panel of faux metal with a logo embossed into it for a Business office sign.

I ended up making a number of cubes in various finishes using different materials. 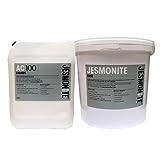 How I made A Faux Metal Cube

To make the cube I first cut a block out of 12" thick polystyrene from a larger sheet of 96" x 48"x12". Polystyrene sheeting is available in various thickness supplied by insulation and packaging companies. The polystyrene was cut using a hot wire. We have a large hot wire cutting table in the workshop which allows me to cut large blocks of polystyrene into various shapes.

The next stage of the process was to coat the polystyrene in a layer of silversand, silversand is a fine grain sand, i could also have used paving sand. the sand is air dried first over a number of days in the sun or under an air dryer.

To coat the polystyrene with the fine grade sand I coat the polystyrene with waterproof PVA, it must be water proof PVA or the process does not work properly. I coated on side at a time and then poured the dry sand onto the PVA and allowed it to cure, then do the next side and allow to cure. Once all sides were coated in a even layer of sand coating I made a nice cup of coffee and prepared the next stage.

The next stage in the process was to make some water based resin using jesmonite. A mix of one part liquid AC100 and two parts filler powder works perfectly for me, maybe a bit more filler. ad the filler to the liquid not the liquid to the filler. I them mixed it with a domestic hand held blender until smooth.

The resin cured with in minutes so I had to apply the mix onto the sand coated surface of the block fairly quickly. One surface at a time and then allow to cure. Once i had coated one face I place a smooth sheet of silicon paper onto the surface and then a sheet of hardboard and allowed it to cure. When the resin had hardened after about twenty minutes i removed the silicon paper and the hardboard and then repeated the process again until all size sides were coated in jesmonite water bases resin.

The effect on the block was a series of flat and uneven areas on each plain with some rough sand textured sections which when painted would resemble rest.

Jesmonite is a brilliant material to work with, much easier to use than epoxy resin or polyester resin which are rather toxic to the user and to the environment.

To paint the cube I first painted a layer of vinyl matt emulsion diluted with water and colour mixed to my desired tonal finish. I painted all six sides in one go and allowed to dry in the sun.

The next later I used an old paint brush to cover the block in a silver coloured paint, Bedec silver satin paint and while the paint was still wet a put another layer of very dark brown paint applied by a rag cloth. Areas of paint were removed with a clean rag to allow the orange paint to show through in places. Speed is important because the Bedec paint cures quite quickly. the black was allowed to cure on a sheet of silicon paper. the silicon paper stops the paint from sticking to the surface it was siting on.

The paint cured and the result seemed to work quite well for the desired purpose. Working on a larger area like a panel was even harder due to the time constraints of curing times of materials.

In June 2015 we had a job to make some masonry cast stone letters for an architectural pub sign name for a Free House Pub in England. Our customer wished to have 3D letters made of materials that were to become part of the structure of the building. The letters were cast in stone with jesmonite as the binder.

Cold cast iron resin project. Purpose of project to practice working with Jesmonite resin adding iron powder to the mix and allowing it to oxidize and become rusty when exposed to water.

The mould was made from hot wire cut HDFRA grade polystyrene. The cast resin mix consisted of 2 parts liquid ac100 jesmonite, 5 parts powder and 1 part kiln dried fine grade sand and finally 1 part iron powder. I poured the liquid into a suitable large 2litre plastic container, added the powder, mixed together with an electic drill fitted with a special blending extension. Dried sand was then added and mixed, iron powder was then finally blended together until a smooth mix was achieved. The mixed resin was then poured into the mould. trapped air was removed by agitating the mould on a vibration table. The resin was allowed to cure for one hour before removing from the mould, the mould was destroyed in the process. The cast resin object was then cleaned up using wet and dry sand paper and metal files and rasps.

The object was left out side and water was sprayed over the casting. 24 hours later rust appeared on the surface of the cast.

Conclusion. A higher amount of iron powder would be an option.