"Summer Clouds", "Blueberries and Ferns" and "Lady with a Bouquet" by Charles Courtney Curran Other than some initial pieces I have seen in an art class, and in museums, I never really realized how much I liked Charles Courtney Curran's work until I looked up other paintings. Recently, while I was researching something completely different, I came across one of Curran's beautiful paintings. So luckily, I was reminded of his paintings and looked up the rest while it was fresh in my mind.

I am inspired by these pieces of elegant art, and wanted to share them with others that may not have ever seen them before. That is the inspiration for this simple gallery. I hope you like them as much as I do.

This hub shows just a sampling of Curran's work. You will see a lot of very bright white, and light pieces that are simply stunning, in my opinion. You will also see, however, a few pieces that go to darker colors, or the subjects in the painting are in the dark or night. So he has quite a range in his painting.

Charles Courtney Curran was born in Kentucky, USA. He lived from 1861 to 1942. His most well known works include women in various settings, painted on canvas. His father was a teacher in Kentucky. Not long after Charles' birth, the Civil War began. At that time, the family moved to Sandusky, Ohio, and lived on the shores of Lake Erie.

Charles Curran showed an early talent for art. By the time he was twenty years old, he went to Cincinnati for art school. Soon after that he went on to New York to study at the National Academy of Design.

For some of his paintings, Curran used his family members as models, along the shore of Lake Erie. This answered a question I had about who some of the different women were.

Curran was married to Grace, and they moved to Paris where their first child was born. They were there a few years before returning back to the States. Later, the family relocated to the Shawangunk Mountains which is about one hundred miles northwest of New York City. He was very inspired there, and built a home there. It is said he was surrounded by incredible scenery and native flora. Later, he died in New York City, in 1942. "Lady with a Bouquet" and "Betty Newell" by Charles Courtney Curran

"High Country" and "On the Heights" by Charles Courtney Curran "A Breezy Day" - Charles Courtney Curran and Photo of Curran The above painting, "Breezy Day", is one to point out in particular. It was created in 1887, and was part of a collection of Pennsylvania Academy of Fine Arts. Breezy Day won the Third Hallgarten Prize for oils from the NAD, in 1888. The flowing white sheets in the breeze, are simply beautiful. The women in the grass, while so simple, is so elegant and lovely.

As for my overall "take" on Charles Courtney Curran, I am simply blown away. It is hard to say why exactly, but I truly love his work. It has a depth to it, and a simplicity all at the same time. Just when I thought it was going to be a majority of skies and flowers and women, along come some other pieces that you can tell were inspired by a whole different location, and activity.

The faces, and the way he captured their moods in the different pieces, allows the viewer to nearly feel the same thing the subjects are. Little things like the goldenrod flowers in the one picture, to the lanterns in the other, have a way of making me remember them. It is hard to explain.

Having been through Kansas a few times, often the sky and clouds do look that blue, and that beautiful. I feel fortunate to have found this artist and am so happy to view the world through his lens, even if just for a little bit. He is an incredible artist.

As for my favorite from this grouping of pieces, it is too hard to pick one. I will say that some of my favorites here are The Boulder, Lotus Lilies, Breakfast for Three, and In the Luxembourg Garden. That said, if you ask me on another day, I may have some other favorites. They are all wonderful to me. Have you ever heard of or seen the work of artist Charles Courtney Curran? 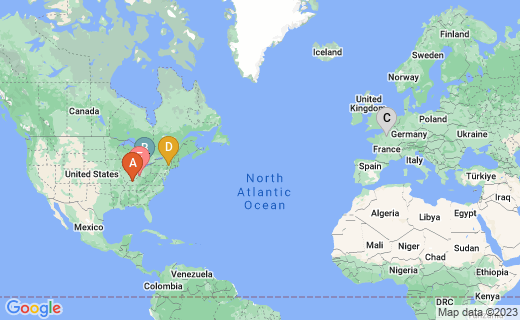 Where Curran's family moved once the Civil War began.

Where Curran enrolled at the Academie Julian, where he experimented with different painting styles.

1881 After Curran showed an aptitude for art, Enrolled for one year at the McMicken School, later to be called the Fine Arts Academy of Cincinnati.