Lynsey enjoys travelling, and is sure to have a camera and a notebook with her wherever she goes, even in her home country, Scotland. 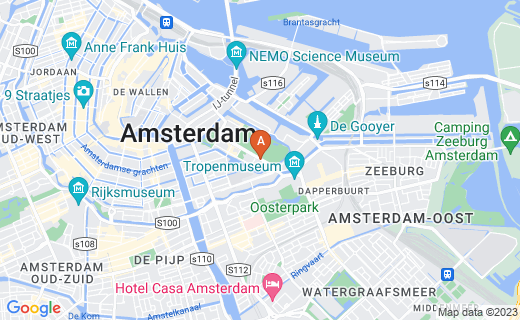 In retrospect, once I discovered trams (which is a whole different story), the museum was very easy to get to from any part of the city. Even if it isn't signposted, head for the Zoo, and you'll find it! When I saw it, I almost squealed with excitement as I realised what I had found, and I insisted that we go in, promising to visit the Zoo afterwards.... oops! (Unfortunately I never quite got round to that!)

As I entered the Amsterdam Tattoo Museum, I was instantly welcomed into a laid back environment. I was told where everything was when I paid in my admission- a bargain at just 10 Euros- and I was encouraged to explore the building. I was freely able to take photos, and enjoy the exhibitions as I flowed throughout the museums curiosities and historical artefacts.

There were so many amazing things to look at! A massive collection of tattooing equipment dating back centuries, as well as rooms with the walls totally covered in tattoo designs. There were painting's of a tattooed Elvis and Anne Frank, and interactive photo boards that you can put your head in- honestly much more fun that it sounds! There were examples of tattooist's practice pieces, and other random things that I never thought for a moment I would see in a Tattoo Museum.

The spaces were laid out very well, and there was no piece that seemed out of place. The whole museum had a nice flow to it, and you naturally followed the path that you were meant to, rather than being guided by an array of vulgar signs like I'v seen in other museums. You were taken on a pleasant journey from traditional tribal tattoos, maori tattoos, ancient tools and evidence of prehistoric tattooing, all the way through to the increase of popularity among westerners, and then through to modern times. Everything was laid out in this order, and even my boyfriend, who doesn't have a single drop of ink on his body, was enthralled with the amazing display!

As I climbed the stairs to the next level of the experience, I heard voices, chatting away. It all seemed very friendly and relaxed. It was quite a sunny day as well , so the sun shone through some gorgeous window art nicely. On this level, I saw the more modern examples of tattoo machinery and designs. There was an area themed as though it was a circus show, and a small stage where the "tattooed lady" would perform. There were certainly plenty of photo opportunities, and fortunately (for us) it was relatively quiet, so I could take clear shots without any interruptions.

We wandered around to the bar area, and discovered the root of the chatty noises. The Museum's security Guard (I forget his name) introduced himself, and asked if we spoke dutch or english. I was very impressed with this, and his English was perfect. He had been previously chatting away to other customers, and I was thrilled when he began to tell us even more interesting facts about some of the artefacts I had already looked at!

This guy was so knowledgeable, I definitely recommend seeking him out if you visit the museum! He spoke with true passion, and complimented me on my designs, speculating on the increasing popularity of tattoos among women. He even told us how Lady Gaga had just had a tattoo there, a few months before! While we were chatting, he mentioned that there was an artist upstairs who done Traditional Japanese Tattooing. I was so excited! I had always wanted a traditional Irezumi tattoo, and i said that I would be getting one. There goes the Zoo trip!

I went upstairs to the tattoo area and spoke to the resident artist in question, Yushi Takei, and asked if he would do a tattoo for me. Now bearing in mind that I didn't have a clue what I wanted, I threw some obscure ideas at him, until we decided upon a cherry blossom design. 15 minutes later, I was on my way to my first traditional Irezumi Tattoo!

I must say, I'm not usually this spontaneous, and I applaud Yushi in the way that he remained totally professional even when I (insultingly, I'm sure) asked him to tattoo a sailor jerry type design, and changed my mind about 10 times before settling on the more appropriate, Japanese design.

The Irezumi process was one of the MOST relaxing tattoos I have ever had. I actually nearly fell asleep at various points. The chat was great, and every now and then, the security guard would appear with new customers he'd met downstairs, showing them this traditional art form in progress. For a small time, I was an exhibit at the museum! It was pretty awesome!

Now you may be wondering why I felt the need to share this all with you. Firstly, I wanted to review and highly recommend such an interesting place, should you be visiting Amsterdam. Secondly, as I am writing this, the Museum is threatened by closure. It is just 1 year old, and not yet fully discovered by the tourist market. I would like to show support for this unique attraction, as not only is it an amazing place to visit for me, it is a great atmosphere to be in. It's also family friendly- at one point, I saw a little boy wandering around chatting to the artists. Where else would you find that?

I can only hope that the Museum manage to secure the funding they need in order to remain operational. If so, please check it out, and share your opinions! Let the world know that this little niche museum exists, giving us a wonderful insight into a wonderful world! Even those with no interest in getting tattoos need to see this, because it opens your eyes to exactly how long the process has existed for! If not, it will be sadly missed. Definitely the best attraction in Amsterdam!