Real Art For Only Five Dollars! What A Bargain!

While You're Visiting The Cosmopolitan Hotel In Las Vegas.... Why Not Buy Some Art For Five Dollars?!

That's right! Next time you are visiting the Cosmopolitan Hotel here in Las Vegas, you can get yourself "art-i-fied" while you're busy doing the tourist thing. Just pop a $5 bill into one of these Art-O-Mat vending machines of fine art, and VOILA! You have yourself a signed masterpiece that just dropped into that little space at the bottom of the vending machine! Pretty cool, hey?

From what I've read, the Cosmopolitan has at least eight of these machines scattered throughout the hotel. There are six of them on the second floor, and I know there is one on the third floor (not too far from the "Secret Pizza Place") because we saw this machine last time we were at the Cosmopolitan Hotel. And I was recently reading that there is also a pretty pearl white Art-O-Mat machine right outside of the Wedding Chapel at the Cosmopolitan... you know, for that really classy, unique and unforgettable last minute wedding gift!

This is actually a really NEAT idea. Art-O-Mat machines are old cigarette machines that have been converted into machines for the selling of fine art. No more walking around artless! Just pick up a piece of art next time you are out and you can use it in your home, on your desk at work... the possibilities are virtually limitless!

I did read a little about the history of the "Art-O-Mat" recently. It seems that back in 1997 in Winston-Salem, North Carolina an artist by the name of Clark Whittington came up with the idea. It came about in a funny way, really. It happened because of one of Clark's friends reactions to the crinkling of cellophane from a snack that had just dropped from a vending machine and was being opened. He referred to his friend's reaction as "Pavlovian" and said that just because his friend heard this cellophane, he had to have a snack as well.

Whittington was going to have an art show at a small cafe, and he had the idea to turn an old cigarette machine into one that was capable of selling art. He used his own art, based on some of his photographs, and sold them from the machine during the art show for just $1 each. The machine was a hit, and long after the art show was over, the owner of the cafe asked him if she could keep the machine in her cafe. That was the beginning of the Art-O-Mat vending machine.

It soon became evident that the art work from other artists would also be needed if there were to be other Art-O-Mat machines, and the owner of the cafe introduced Whittington to some other artists that were interested in selling their works in these popular vending machines.

Today, there are more than 100 Art-O-Mat machines across the United States, maybe more by now. The concept has really taken off. The machines are found in art museums, on college campuses, in children's hospitals, and in various scattered "Whole Foods Market" stores, and of course, now they are a fixture in some Las Vegas hotels. This is actually a very smart, creative idea, and a great way to get the art work of new artists to be seen and enjoyed by new people.

Now, more than a decade after these Art-O-Mat machines were invented, their popularity shows no signs of slowing down any time soon. Now the VERY cool thing about these machines is this... about one half of the art in machines featured at the Access Gallery in Denver, Colorado is made by professional artists from Colorado and all around the country, and the other half is made by teenagers with disabilities. These teens are participating in an art program run by Access Gallery in Denver, Colorado. Artists receive 50 percent of the sales of their art that is sold from the machines.

Some of the art sold in this Denver art gallery is actually made by using parts of a collage type of mural made by wheelchairs with special rollers on them that were then rolled over a canvas used to create colorful abstract art on the canvas. Pieces of this mural are sold in the Art-O-Mat machine there to help to benefit these special artists.

The art not only includes paintings and drawings, it can also include such things as jewelry made from interesting items like computer chips, handmade original key chains, paintings of unique things like dragons and wolves, and even intricate collage pieces. The art is as varied as the artists that create it.

On a national basis, there are approximately 400 artists that participate, from over 10 countries. This is quickly becoming an international phenomenon. It's a great way for new and established artists to gain exposure and "buzz" about their work, and it's also a great way to provide real art to people who otherwise may not have access to it. Small pieces of art the size of a pack of cigarettes, who would have ever thought of it?

Artists seem to enjoy these machines as much as the people that discover and buy the art, it has become a win for both. And in the words of one of the artists "It's better for you than cigarettes."

One Of The Outstanding Artists ~ Karina Riebel

This is just one example of the art that you can buy from an "Art-O-Mat" vending machine. Karina Riebel enjoys painting pictures of dogs mostly, and she has a website, www.painteddogstudios.com where she will make a customized unique painting for you of your dog if you send a picture to her. She feels that each and every dog has their own uniquely expressive personality and she strives to capture that personality in her paintings.

The Youngest Of My Favorite Art-O-Mat Artists, Noelle

Just a teenager, Noelle is an artist that comes from a strong family background of artists. Noelle has been designing jewelry professionally since 2004, when she was just SIX years old. Yes, you read that right, SIX years old. She is the grand-daughter of famous international sculptor Seppo Aarnos. She is a fourth generation artist in a family that has at least 35 professional artists in it. She likes to work in different media, including fabric weaving, metal sculpture, jewelry making, dolls and photography. She is best known in the world of "Art-O-Mat" for her selection of jewelry.

The work that she sells through "Art-O-Mat" consists mostly of glass bead bracelets, and her audience is primarily women and teenage girls. Noelle is still in school, and the neat thing is that she donates ten percent of her profits to charity to help others. It's very refreshing to see a very young entrepreneur with such a thoughtful and generous spirit.

Maija Peebles-Bright Has Such An Interesting Story!

Maija Peebles-Bright is another outstanding artist with work featured in Art-O-Mat machines. She is a Sacramento, California artist with a very interesting personal story. She was born in Latvia in 1942 and was brought to America when her parents were forced to flee the country. When she was about eight years old, she moved to the Sacramento area.

As a young adult, Maija originally planned to be a math major at the University of California at Davis. She was in her third year at the University when a counselor suggested to her that she take an art course, in order to fulfill some of the more general education requirements of her degree. That was all it took. Maija became enthralled with the art world and it became her destiny. In college, she created ceramic sculptures, paintings and prints.

Known for her bright, cheerful and very colorful style, she specializes in creative and interesting looking animals and bright flowers. Maija has since become a very popular artist. She is also known for a Victorian house that she painted in California using "every color made by Dutch Boy." She dubbed it "Rainbow House." In the late 1960s and early 1970s many of her artistic colleagues gathered there to talk about things like life in the 1960s and 1970s, and of course, art.

Maija Peebles-Bright was once quoted as saying "I find that art drives my life" and "I do art in just about everything."

I guess one could just put their five dollars into an Art-O-Mat machine, and "pick a button, any button". But I prefer to do a little bit of research into the background and stories of the artists whose work is featured in the machines. I think that makes buying the featured art more meaningful when you buy something that was made by an artist whose work you enjoy, and that you know a bit about. And some of these artists truly DO have very interesting background stories!

Now anyone can own real pieces of art, at a very reasonable price! 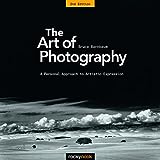 The Art of Photography: A Personal Approach to Artistic Expression
Buy Now