Ron Mueck is an Australian hyper-realist sculptor working in Great Britain. Mueck's early career was as a model maker and puppeteer for children's television and films, notably the film "Labyrinth" for which he also contributed the voice of Ludo.

Mueck moved on to establish his own company in London, making photo-realistic props and animatronics for the advertising industry. Although highly detailed, these props were usually designed to be photographed from one specific angle hiding the mess of construction seen from the other side. Mueck increasingly wanted to produce realistic sculptures which looked perfect from all angles.

Mueck's sculptures faithfully reproduce the minute detail of the human body, but play with scale to produce disconcertingly jarring visual images. His five meter high sculpture Boy 1999 was a feature in the Millennium Dome and later exhibited in the Venice Biennale. 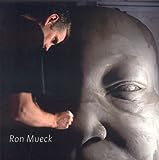 Mueck concluded that photography pretty much destroys the physical “presence” of the original object, and so he turned to fine art and sculpture. In the early 1990s, still in his advertising days, Mueck was commissioned to make something highly realistic, and was wondering what material would do the trick.

Latex was the usual, but he wanted something harder, more precise. Luckily, he saw a little architectural decor on the wall of a boutique and inquired as to the nice, pink stuff’s nature. Fiberglass resin was the answer, and Mueck has made it his bronze and marble ever since.

Pregnant woman is Mueck’s most ambitious work to date. The sculpture is monumental (2.5m high), utterly imposing and even intimidating when first experienced by the viewer. After a while, however, this majestic Earth Mother becomes familiar, unthreatening and endearing. She is exhausted, hands held back over her head; the face is tender and vulnerable. Her presence is a powerful one indeed, and she evokes a multitude of thoughts, ranging from the wonder of maternity and procreation to population control and the burden of female responsibility.

Over three months Mueck worked with a single female model, beginning when she was already six months pregnant. He also used photographs — and, without doubt, there are also art historical precedents behind the sculpture as the artist absorbed the wonderful European Old Master collection in London. He made the figure in fibreglass but, because fibreglass is so hard, made a separate face in silicone, so that eyebrows and hair could be punched in with greater ease but no less perseverance. Tiny needles were used to punch in human hairs one by one in tedious repetition.
In the three years since his participation in Sensation: Works from the Saatchi Collection, Mueck has posted shows at major galleries in New York, Germany, not to mention selection for the London Millennium Dome and now his work is the subject of a solo exhibition at that city’s highest profile contemporary art space, Anthony d’Offay gallery.

Please scroll down for more works of Ron Mueck

Ron Mueck takes his place in the tradition of those who have tried to make objects which are very real. Terms such as Super-Real and Hyper-Real have been used to describe those artists who have attempted extreme verisimilitude. Ron Mueck seeks to achieve perfection, the precise demonstration of reality as he finds it.

Mueck’s work is always out of scale from reality. His figures are either oversized or undersized. They strive for super-realism, but there is a psychological confrontation between these two contradictory realities, the effort to deceive by perfection, and the obvious discrepancy of scale. Ron Mueck’s work is sculpture. He does not make models, giant or tiny puppets. He employs all the techniques of technological advance to create works of art.

Dead dad was a hyper-realistic sculpture of Mueck’s dead father, naked, lying on the floor, so that you could easily trip over him, especially because he was only three feet long. This extraordinary work had huge emotional power, and many visitors remembered it well. Mueck makes work very slowly, taking on average four weeks for each work, although Pregnant woman took much longer, being his most ambitious work to date. By 2002, when Pregnant woman was made, he had created only 30 sculptures in total.

Mueck works with a particular type of super-realism that has a long history. He invites people to take a close-up look at his work, to inspect the hairs, freckles and blemishes, to scrutinize the carefully modelled expression and contemplate the difference between artist-made reality and the world in which we live.

"I never made life-size figures because it never seemed to be interesting. We meet life-size people every day.'" Says Mueck

'There's no denying that I have more information readily at hand when I have a live model. Even when I have had a model, however, what I have to do in the end is to consciously abandon the model and go for what feels right.'

The artist's work has been applauded by some critics as 'the best thing to happen to figurative sculpture in ... generations'. (Peter Plagens in Newsweek), but others have dismissed him as a mere 'model maker'. What do you think?