John Ruskin, reputed to have coined the phrase 'Blottesque'.

I am a member of an Art Society and was lucky enough to attend a wonderful demonstration of a water colour technique called "Blottesque", a word attributed to intellectual, John Ruskin, Victorian art critic and watercolourist..

When I researched the word "Blottesque", I found it quite difficult to associate the literal translation of the word, which is: "characterized by blots or heavy touches, crudely executed or coarsely depicted", with the current use of white under painting, until I found a reference which included: "wanting in delineation" (1).

This last term made much more sense of the modern day interpretation of the process.

Whilst Blottesque may have a literal meaning "applying paint in daubs and blots" to create an impressionistic image, the term is most often used today as a watercolour under painting technique where white paint, usually Chinese White, is laid down in thick patches on heavy raw watercolour paper in places where mist, smoke or foam might want to be represented. After being allowed to dry, this white paint is then reawakened and pulled through the uppermost layer of painting, which creates a misty opaque effect, contrasting with the more naturally translucent water colours.

The Parisian Impressionists of the early nineteenth century spent many hours in the bars of Montmartre discussing, debating, and even fighting over the term "Finish". The question central to their arguments was, "when might a painting be deemed to be complete?"

Gone were the days of faithful representation of the Renaissance and the Dutch Masters, the new Impressionist movement created a real conundrum for the modern artists.

Probably one of the most famous Impressionists is Claude Monet. Fortunately for us, Monet was a prolific writer and tells how he was "never finished" with his picture and how this problem "tortured" him. He seemed to be in a state of constant search, which left him unsatisfied and driven.

Today artists and watercolourists are still experiencing the same problems. Watercolour paintings can easily suffer from over painting, or the artist not recognising when the painting is finished, a painting can to sludge in a moment of heavy handedness. Additional, wonderful techniques like Blottesque serve to complicate watercolour skills, especially finish, even further.

During her demonstration, our talented artist herself confessed: "It is often difficult to decide when a picture is finished, and when to stop painting". Towards the end of her demonstration she was beginning to work tentatively into the white, working on her Blottesque technique. Dramatically she pulled the dried Chinese white forward, this created an illusion of steam coming off a damp thatched roof, which was being warmed by low lying early morning sunshine, the effect was beautiful, her skill was evident and so was her knowledge of when to stop.

So the conundrum of finish is as real today as it has ever been. My observation is that Blottesque compounds the controversy of 'finish' even further.

I am not a water colourist. However, in order for me to truly understand new techniques I like to try them out. I chose two contrasting but beautifully atmospheric images as my inspiration.

The first image, a monotone industrial image of a smoking chimney stack, enables me to keep this Blottesque exercise to a discipline. The plan is not to initially be overwhelmed, by worrying about colour and detail, but more to be involved in form, working the white 'under painting' into the dark monotones of the ground.

The second image is much a more adventurous and difficult one for me. Here, I am not attempting a photo-realistic painting, of a waterscape but a representational painting utilising the Blottesque technique to bring out the mist rising along the waterline and into the colourful wetland of the banking.

Firstly, I sketched the chimney stack and smoke. Then I painted the smoke with Chinese white paint. Whilst the white paint was drying I soaked the rest of my painting with water until the paper was evenly damp so I could paint my background wet-in-wet. The picture to the right shows the white of the smoke and below, the wetting of the paper

Purists might baulk at the methods I have employed in my first Blottesque water colour attempt because I have used pencil to sketch the image and used lamp black paint as the background. I am not a water colour artist, and so feel I can be absolved of the constraints of purism. I also did not stretch my paper, but I don't mind this because I prefer the effect of pooling of tones or colours.

I liked the grainy, effect of the dark background on the paper as it puddled and rippled, so decided not to over paint it to the finish of the photograph, but to leave it as a suggestion of a dark moody sky.

When all the paint was dry I started to use a clean, wet brush to revive and push the Chinese White paint across into the black areas. This, amazingly, seemed to begin to create an illusion of smoke or steam.

It is inevitable that the end result is not going to be a masterpeiece, but the Blottesque work is visible, particularly towards the towards the outer egdes of the smoke as it dissipates into the dark sky.

Even a novice like me can produce a reasonably misty effect using Blottesque.

So to my next study. A little more ambitious, a waterscape. I chose this picture because the water is still. I hope to be able to pull the white under painting upwards onto the bank and downwards across the water so as to create a mist resting along the waterline.

Firstly I drew a faint sketch of the painting. I am not overly keen on seeing pencil sketches in my final painting, so i try to keep the lines to a minimum. Then I put in my underpainting of Chinese White for the Blottesque area along the waterline. I paint this quite thickly.

I have previously confessed to not being a water colour artist, and my lack of skill is pretty evident in this picture. The main objective however is to demonstrate Blottesque technique. When I did decide to finally push the white across onto the bank and the waterline to emulate mist rising off the water, the rest of the picture was not really finished.

It didn't seem to matter too much, the under painted Chinese white pulled through pretty effectively and after I had pushed it around a bit, has managed to give an illusion of mist along the waterline. What I also wondered, as I was working, was, could the technique be used with any light colour used as under painted layer? 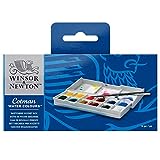