Athlyn Green is an avid crocheter and knitter. She designs and sells handcrafted goods.

An Art Form That Combines Skill and Traditional Designs

Authentic Cowichan sweaters are known the world over--and with good reason. Cowichan knitting is an art form that combines both skill and traditional designs.

These beautiful and sturdy wool sweaters had their genesis with the West Coast Salish people. The inhabitants of the Cowichan Valley on southern Vancouver Island in British Columbia were skilled at making warm garments and coverings out of different materials, which included mountain goat wool, dog hair, and other fibers available in the area. They used weaving techniques, employing spindles and looms prior to the arrival of the European settlers.

Two events, changed the course of history. Around the 1850s, sheep (likely brought in by settlers) were introduced to the area and missionaries came into the Cowichan Valley. They taught Native students knitting techniques. From early items such as mittens and socks, the Native knitters started to create larger garments, such as long undergarments. These knitters put the readily available wool to good use and went on to create hand-spun sweaters that withstood coastal elements such as rain and snow. The sweaters, made as they were from real wool and containing natural oils, were waterproof.

In time, the sweaters took on the preferences of the innovative Salish knitters and came to be embellished with traditional designs, using the Fair Isle technique, which employs two to three colors that are alternated to produce specific designs. The sweaters were knit in the round, which meant the garments did not have seams, and made from natural thick uncolored wool, the sweaters were usually in cream, grey, and black and were heavier than standard sweaters made with lighter-weight yarn or wool. All elements combined to create distinctive-looking sweaters and, over time, designs and techniques were passed down through families. One generation taught the next an evolving art form that has stood the test of time.

Soon, others became interested in these attractive-looking, incredibly long-wearing sweaters, which had become synonymous with the West Coast. Both British Columbians who lived in the area and tourists who visited Canada sought out the traditional knits.

Cowichan knitting is a combination of European textile techniques and Salish spinning and weaving methods.

Knitting Skills Passed Down Through Families

Salish knitters pulled sweaters apart to see how they were made and copied construction techniques.

The fleece could be turned into wool that was ideally suited for making super warm sweaters.

From Sheep to Sweater

In the early years, fleece from Dorset, Hampshire and Suffolk sheep was used. These breeds produced a lofty fleece that was lightweight, so the wool made from it was ideal for making thick, warm, durable garments.

Great effort was expended. Unlike today where wool can be purchased washed and spun and ready to be knitted, Salish knitters had much work to do before they could even begin knitting. Imagine having to handle heavy, soiled fleece and turning that into fluffy wool yarn.

As can be seen, this was a labor-intensive process. After all these preliminary stages were completed, knitting could finally commence.

While some knitters prefer the old methods of preparing wool, many buy washed and carded wool. And to meet the demand for authentic Cowichan sweaters, Native knitters now make use of modern time-saving tools, such as motorized spinning wheels, while largely sticking to traditional knitting methods, so as to continue to produce authentic, quality garments.

Women started knitting and selling sweaters to earn money for food for their families. They worked extremely hard because they had to prepare the fleece first before knitting could commence. Men, boys and girls also learned the craft and thus, techniques and patterns were passed down through families.

Many Stages are Required to Turn Fleece into Knittable Wool Yarn

Cowichan sweaters are usually made from sheep's wool.

The wool yarn was spun and created with tools that have evolved over time.

Knitting needles used to knit the spun wool were rudimentary in the early years and were fashioned with materials available to the Salish, but, like the spinning tools, these have changed as commercially-produced needles became available.

* Buying a Cowichan sweater could be viewed as a lifetime investment. These sweaters are pricey but they have a lifespan of approximately 80 years, so are well worth the initial cost.

* The durability of real wool has to be experienced to be believed and these sweaters are naturally water resistant.

* If you have a Cowichan sweater in your possession, you are fortunate indeed.

A Tale of Endurance Knit One Stitch at a Time

It could be said that the Cowichan sweater tells the story of the Coast Salish knitters and their journey past poverty and racism. They survived and prospered using their skills as knitters to produce quality sweaters that eventually helped to disprove stereotypes. While they were largely excluded from society, Salish knitters mustered on, pouring heart, soul and passion into sweaters that helped them provide warm clothing for their families, develop cottage industries, and put their stamp on Canadian history, earning them the respect they deserved as a hardworking, creative people.

This book is a fabulous read, full of historical background and photos and a must-have for knitters who are interested in learning more about Cowichan knitting and how it developed into the art form it is today. A comprehensive overview of an important part of Canadian history and the hard-working Salish knitters who carved out a niche for themselves.

Working with Wool: A Coast Salish Legacy and the Cowichan Sweater
Buy Now

Talented Coast Salish knitters have combined artistry and skill to create distinctive Cowichan wool sweaters for almost a century, and the craft is flourishing in modern times. These garments have benefited Native communities and the greater human family around the globe.

Where to Find Cowichan Sweaters?

Authentic Cowichan wool sweaters, made by Khowutzun Native knitters, are in great demand--so revered, in fact, that they have been presented as gifts to royalty and to visitors to the Province and collected by many as Canadian souvenirs.

Visitors to Vancouver Island or the Cowichan Valley may spot these distinctive sweaters in shops around the West Coast area and they may see locals wearing them.

Getting to the Cowichan Valley 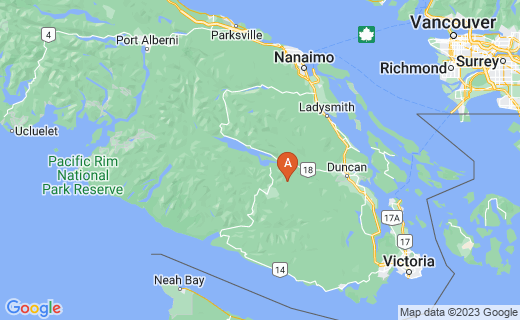 Fast Facts About Vancouver Island's "Gift to the World"

Have Cowichan sweaters changed much over time? What can consumers expect when purchasing one of these knits?

Have You Ever Owned a Cowichan Sweater?

Where to Find Patterns for Cowichan Sweaters

Keywords to Use When Searching for Patterns

If you are looking for Cowichan or Cowichan-style knitted goods, good keywords are:

In an age when run-of-the-mill lightweight sweaters are mass-produced in factories, a dedicated community of knitters continues to work with natural fibers to create "last-a-lifetime" sweaters using virgin wool and long-standing spinning/knitting techniques. Cowichan knitters have been joined by other crafters who also enjoy working with natural fibers and making these sweaters. And an appreciative public appreciates the time, skill and love that goes into these unique works of art.

Have You Ever Knitted a Cowichan Sweater?