Dragons are legendary creatures that feature in the myths of many cultures.There are stories of dragons all throughout history and the dragon was featured in medieval art more frequently than any other fantastic creature.

Dargon gargoyle statues are still as popular today as they were in the Middle Ages and there are many avid collectors of medieval dragon sculptures and figurines. Dragon statues help to perpetuate the many myths and legends about dragons and the symbolism of power and protection that they offer. Dragon gargoyles always add a mystical feel to any spot in your home or garden where they are used.

According to Wikipedia the word dragon entered the English language in the early 13th century from Old French dragon, which in turn comes from Latin draconem (or draco) meaning "huge serpent, dragon," and also from the Greek drakon meaning"serpent, giant sea fish". The word dragon is also believed to come from from an earlier Sanskrit, dric which means"to see" or "the one with the (deadly) glance."

Dragons are usually shown in modern times with a body like a huge lizard, or a snake with two pairs of lizard-type legs. Some dragons are said to breathe fire or to be poisonous, such as in the famous Old English poem, Beowulf (an epic poem in which Beowulf defeats a dragon but is fatally wounded in the battle). Dragons were commonly portrayed in ancient literature as reptilian, hatching from eggs and possessing typically scaly or feathered bodies, sometimes with a row of dorsal spines. They were often portrayed as having especially large eyes for watching over their treasure very diligently.

Dragons were thought to be very intelligent creatures. They lived in remote areas, far away from humans, in places that are dark, damp and secluded, such as caves. Almost all dragon stories portray the dragon as the villain from whom the hero must protect the city or the princess. But some dragons can take on the form of the protector. The biggest differences in dragons usually come from different cultures, especially the cultures of the East and the West. Each culture seems to have their own idea about dragons.

Whereas the European dragon was usually depicted as evil and menacing, in Asian cultures dragons were revered for their wisdom—they were often said to be wiser than humans—and for their longevity. Dragons were commonly said to possess some form of magic or other supernatural powers and, in some cultures they are also said to be capable of human speech.

In medieval times times dragons seem to be the fantasy creatures most often depicted. Other animals, such as the lion or griffin, could be used to represent both good and evil, but the dragon in Western art was generally considered a symbol of evil.

It is believed that the many dragon gargoyles used on medieval cathedrals served as a warning to the general population against the forces of evil and temptation. The devil himself was most frequently portrayed in the form of a dragon. Before Lucifer revolted against God and was thrown out of heaven, he was apparently the most beautiful of all the angels. But when Lucifer fell, he became as ugly as he had once been beautiful and changed his name to Satan meaning "adversary" or "opponent".

In the book of Revelations the archangel Michael and his angels battle a dragon described as " an old serpent, which is the Devil and Satan" which is portrayed as a reddish crocodile-like creature with bat wings and seven heads, thought to represent the seven deadly sins.

Although the anatomy of medieval dragon sculptures is far from standardised they typically featured a pair of membranous wings (like those of a bat - an animal associated with darkness, chaos and evil) rather than feathered (like those of a bird or an angel), perhaps indicating the devil's origins as a fallen angel. They were usually carved with two or four legs, claws, a long reptilian tail and a bestial head with a long snout, visible teeth and a fierce expression.

In the middle ages the "Bestiaries" were illustrated books of animal lore, which described the habits of animals, both fantastical and real, and gave them a moral meaning, equalizing their features and behaviour with a Christian way of live. The dragon was identified in the bestiaries as devil-like with a crown like crest that symbolises the devil's status as the king of pride. The dragon's ability to suffocate his victims extends even to the elephant; using his tail to lasso the elephant's legs in a knot, the dragon then kills the elephant by coiling around him.

Like the devil, the dragons strength was not in his teeth but in his tail - the devil beguiles by deceit, strangling the deceived in the knots of their sins.

Many saints were said to have conquered dragons, the most famous being St George of Cappadocia. In their daily struggles against the forces of evil, the people of the Middle Ages had many guides to show them the path to virtue. That so many dragons were conquered gave hope to the faithful that their problems could be overcome.

Although considered to symbolise evil, European dragons were also believed to act as protectors or guardians (often of great treasure) which is why dragon gargoyle statues continue to be a popular choice in many homes and gardens today. 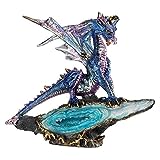 Dragon Statues From The Far East

Although they do not fit into the category of "gargoyles" you may prefer dragon statues crafted with an Asian influence.

Chinese mythology is abundant with artwork, stories and depictions of dragons. Dragons are thought to give life, hence their breath is called "sheng chi" or divine energy. They are essentially benevolent and associated with abundance and blessing. They were helpful, wise and generous with their gifts when people encountered them.

The snake-like dragon depicted in modern sculptures is derived from the many legends of the Far East. In Asian cultures, dragons often represent the spiritual forces of the universe. It is believed that these mythical beasts possess an ancient magic that grants them supreme wisdom and power. Unlike their Western, Medieval counterparts, Chinese dragons are represented as powerful, kind and intelligent creatures and modern day dragon statues are designed to captivate and honor these qualities.

Chinese dragon statues usually have the body of a lizard or a snake-like creature with two pairs of lizard legs. When used in feng shui dragon figurines are representative of "yang." This is the masculine element in the Chinese philosophy that is the opposite of "yin."

Feng Shui dragons help to symbolize an honored and traditional Chinese element of well being and they encourage balance, equilibrium and prosperity.

According to the tradition, dragons are believed to have incredible power of controlling the natural aspects of the climate, such as the winds and waters, which the human beings cannot. Throughout the years, the dragon has been a symbol of harmony, well-being, fortune, honor and luck for many cultures. A pearl, or crystal in the feng shui dragon's claw symbolises power, victory and success in career and achievement of wealth.

You can find more information and photos of Asian dragon statues at Gargoyle Garden Statues. 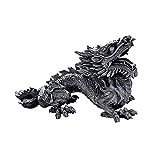