Marie is fascinated by beautiful artwork depicting children and has considered becoming an author-illustrator of children's picture books.

Emile Munier was best known for his paintings of children and animals that conveyed a feminine innocence with an expert treatment of light.

Pierre François Munier and Marie Louise Carpentier were graced with the birth of their second son Emile on June 2, 1840, in Paris, France. Pierre was an upholstery artist at the Manufacture Nationale des Gobelins, a tapestry factory, and Marie was a polisher in a cashmere cloth mill.

Emile's siblings were Francois and Florimond, all three being gifted artists. All the boys served at the Gobelins, especially Francois, who followed his father's footsteps and became a factory foreman. Emile was taught drawing, painting, anatomy, and perspective by Professor Abel Lucas. Through Lucas, Emile painted in the style of the academic tradition and studied the works of Francois Boucher, who was known for his classical themes and Rococo style.

Chronology of Events of Munier's Life

The period associated with French realism in art occurs from circa 1840-1899. The country of France was undergoing great political and social upheaval, as evidenced by the French Revolution of 1848. It was especially after the revolution that artists began depicting subjects of peasants and lower classes in their art, as opposed to the pristine, royal subjects and architecture of traditional academic themes that had been promoted by the Salon up until that time. The Salon, a highly regarded Parisian art exhibit sponsored by the wealthy dignitaries, had been the primary influence of French art. Renown artists of French realism were Courbet, Jean-François Millet, Honoré Daumier, and Rosa Bonheur, contemporaries of Monier.

Here Jesus is portrayed as a French child, with blue eyes, fair skin, and dark blonde ringlets framing the face. He looks not directly ahead, but off to a distance on his left.

The halo about the head appears not as a ring of light, but as a seemingly solid gold, symmetrically etched disc, a common depiction of holy persons in earlier centuries.

The gray background augments the light of the subject's skin and seems to have paths of light extending from the designs of the halo.

The right hand of the child is positioned similar to the teaching mudras gesture of Buddhism, while the left hand covers the heart area. (Jesus, indeed, has been regarded as a teacher of the heart.)

Note the folds in the garment that give the sense of softness and flow. The golden collar, together with the halo, frames the child's face.

A popular image for prints and collector items, First Kiss depicts two cherubs. Bradbury Mint's collector plate has given the story as Michael (an archangel) kissing Faith (the girl cherub) good-bye, as he has to go "down below" to earth on a mission.

The rosy, soft-appearing complexion and the curly blonde hair seem to attribute innocence to the pair. The concept of innocence is further suggested by wings and the cloud background, suggesting a heavenly or ethereal place.

Note the bending at the wrist of Faith's left hand that attests to the softness and flexibility of the subject. Faith's lips appear small, but perfectly formed like rose petals.

The bright, light lavender of the orchid, which almost entirely satisfies the center focal point, stands out here in this painting. Because the flower is slightly to the left of center, however, additional imagery is needed to balance the horizontal plane of reference. So, Munier created the perching hummingbirds and nest to the right of the flower. The light in the sky under the branch with the hanging moss in the upper right-hand corner also offsets the flower. Even the eggs in the nest seem to be aglow, and then there is the crescent white on the hummingbird’s breast nearest the flower. The tropical, winding branches create movement to the composition along with the positions of the hummingbirds, one appearing near flight.

The depiction of the sky suggests that the moment of the day is, perhaps, right after a rain, and the distant trees seem to be swaddled in fog, while the foreground subject matter is strikingly detailed and clear.

Cool colors dominate, but the pink tint in the lavender adds overall warmth, as does the yellow underside of the largest bird’s throat and red scissor tail.

Selections of Munier's Work on Video

If you wish, you may select the pause icon for longer viewing of an individual painting.

Viewer discretion recommended for 3 seconds at 3.0 on the time line.

The three works with commentary by Munier could be classified with the academic and romantic styles of the period. Certainly, the Holy Christ Child Jesus, First Kiss, and Orchids and Hummingbirds are not the mundane, every day subject commonly attributed to realism. The years 1883 and 1886 are when Monier used saintly or angelic figures in his work.

Munier became dubbed as "artist of children and their pets," as the majority of his works during his stay in Auvergne from 1886 to 1891 were of this same subject, true to the definition of realism. Ten of his works in the video depict pet animals in them.

For a gallery of Munier's works, you may visit http://emilemunier.org/catalogue.html?OFFSET=0.

Where is Auvergne, France? 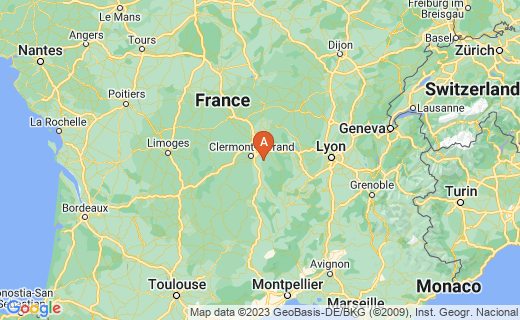 The vacation sport of Emile Munier where he painted his pictures of children and their pets in the rural setting.

http://www.metmuseum.org/toah/hd/rlsm/hd_rlsm.htm (history of French art and realism in the 19th C)