The Best of Harry Clarke - Myth, Fable and Fairy Tale art from "The Golden Age of Illustration"

Harry Clarke (1889-1931) was a leading figure in the Irish Arts and Crafts movement and is best known for his stained glass designs and book illustrations. In respect of his book illustrations, he is one of the artists associated with "The Golden Age of Illustration".

Fairy Tales by Hans Christian Andersen (1916) was his first published work, although he had previously been working on illustrations to accompany Coleridge's ''Rime of the Ancient Mariner'' (that was destroyed in Dublin's devastating 1916 Easter Uprising). A number of commissions followed Fairy Tales by Hans Christian Andersen (1916), including The Year's at the Spring (1920), The Fairy Tales of Charles Perrault (1922), two effective First Editions of Tales of Mystery and Imagination (the first, being the 1919 Edition carried monotone designs only, while the subsequent 1923 Edition carried a complete color and monotone suite).

His second to last project, Faust (1925) is considered his most important as it is a precursor to the evocative psychedelic imagery that has come to be associated with artwork from the 1960s. Selected Poems of Algernon Swinburne (1928) was his final commission and, due to the licentious nature of Clarke's illustrations, that title was banned in Ireland.

In parallel with his book illustration projects, Harry Clarke also prepared other works, including Stained Glass panels and installations to various commissions. One such project was his set of panels inspired by Synge's "Queens" - that was completed in 1917.

While we have provided links for various products available through Amazon throughout this Hub, you may also like to consider the wider range available at the Harry Clarke Collection shown at the 'Spirit of the Ages' Museum.

Harry Clarke's illustrations for "Rime of the Ancient Mariner"

An Edition of "Rime of the Ancient Mariner" was to have been Harry Clark'e first illustrated book and it is believed to have been planned for publication by Maunsel & Co. (Dublin and London) at some time within 1916.

The illustration shown above - on of the few surviving illustrations from Clarke's prospective suite for that publication - is associated with the following text:

"The Souls did from their bodies fly, - they fled to Bliss or Woe! And every Soul, it passed me by, like the whizz of my cross-bow!".

Clarke had been designing the illustrations since at least as early as 1913, but prior to publication, much of the work was destroyed in Dublin's devastating 1916 Easter Uprising and the project was abandoned.

Fairy Tales by Hans Christian Anderson (1916) was Harry Clarke's first published commission and his color and monotone work for this title represents a stunning debut as a book illustrator.

The First Edition may be identified readily by the publishing citation showing the address of George G Harrap & Co. Ltd. (London) as 2 & 3 Portsmouth St, Kingsway WC. Published in 1916, printing for that edition was undertaken by The Complete Press at West Norwood (England). 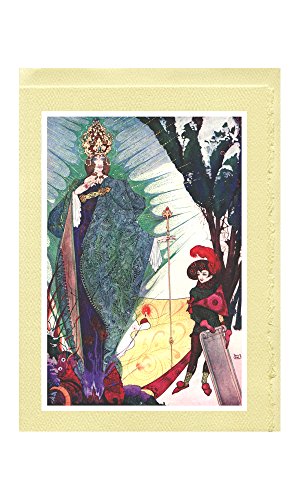 Harry Clarke Greeting Cards (16 Designs from "Fairy Tales by Hans Christian Andersen" [1916])
The illustrations on these Greeting Cards are prepared as tipped-on plates - in the manner of prestige illustrated publications produced in the early decades of the 20th Century. Those tipped-on features are applied to acid-free Ivory card with an accompanying envelope. Each card measures approximately 7 x 5".
Buy Now

The color illustrations (16 in total) prepared by Clarke are brilliantly loaded with detail, a wonderfully eclectic and rich palate and his characteristic unique line and form. His monotone contributions are similarly masterful.

In 1917 Harry Clarke completed a commission from The Rt Hon Laurence Waldron PC for a set of stained glass to accompany the words within Synge's "Queens".

Designed to be hung from left to right in the library windows of Waldron's Killiney Bay house, the first and last panels were stained and painted on kelp-coated clear glass. The remaining panels were wax and acid-etched out of flashed blue, ruby or gold-pink pot-metal glass in addition to being stained and painted. Clarke signed or initialed each panel.

The panel shown here is associated with the following passage from "Queens":

"Queens of Sheba, Meath and Connaught,
Coifed with crown, or gaudy bonnet".

For an exhibition of the panels at Dublin's Municipal Gallery of Modern Art between 1925 and 1928, Clarke customized a wrought iron stand to display the panels to best effect when not insitu at Waldron's Killiney Bay property.

Harry Clarke's illustrations for "The Year's at the Spring" (1920)

The Year's at the Spring (1920) is an illustrated anthology drawing on the collective work of 32 different authors. Deliberately selected by Walters to be conspicuously modern, as noted by Monro in the Foreword, "all except eight of its authors are living and writing ... [and of] those eight, five died as soldiers in the European War, and are represented mainly by what is known as 'War poetry'". Despite the timing of the anthology following closely upon the end of World War I, the 'War poetry' genre is not the focus of the anthology, but instead, as Monro identifies, is "about the earth itself and all the strange and lovely things that compose and inhabit it ... as a whole, [it] is romantic, its language is simple; its philosophy is that of everyday life, and [it] is entirely undisturbing". 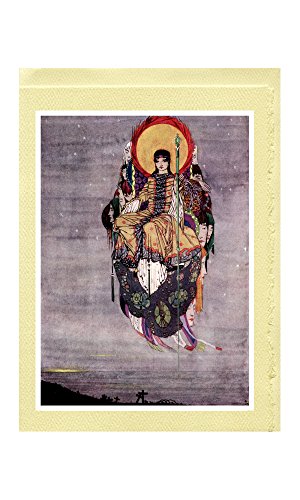 Harry Clarke Greeting Cards (12 Designs from "The Year's at the Spring" [1920])
The illustrations on these Greeting Cards are prepared as tipped-on plates - in the manner of prestige illustrated publications produced in the early decades of the 20th Century. Those tipped-on features are applied to acid-free Ivory card with an accompanying envelope. Each card measures approximately 7 x 5".
Buy Now

Clarke's color and monotone work for this commission shows significant differences from his earlier illustrations, but remains engaging and complements the simple romantic words of the accompanying poetry.

The titles of Clarke's color illustrations for The Year's at the Spring (1920) follow:

Harry Clarke's illustrations for "The Fairy Tales of Charles Perrault" (1922)

The Fairy Tales of Charles Perrault (1922) was co-published by George G Harrap & Co. Ltd (London) and Dodge Publishing Co. (New York). Regardless of the publishing citation, all copies of the First Edition were printed by Turnbull & Spears (Edinburgh). 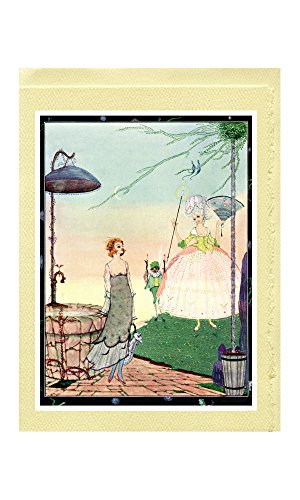 Harry Clarke Greeting Cards (12 Designs from "The Fairy Tales of Charles Perrault" [1922])
The illustrations on these Greeting Cards are prepared as tipped-on plates - in the manner of prestige illustrated publications produced in the early decades of the 20th Century. Those tipped-on features are applied to acid-free Ivory card with an accompanying envelope. Each card measures approximately 7 x 5".
Buy Now

Clarke produced a sumptuous variety of illustrations for this commission, including 12 color images, a further 12 major monotone illustrations and a range of marginal monotone images for decorations including the Titles and Chapter headings and end-pieces.

The titles of Clarke's color illustrations for The Fairy Tales of Charles Perrault (1922) follow:

Harry Clarke's illustrations for "Tales of Mystery and Imagination" (1923)

Clarke's suite of illustrations for a collected work of Edgar Allan Poe - "Tales of Mystery and Imagination" - is arguably the first to include examples of Harry Clarke's chillingly darker illustrations. To create a 'First Edition' for Tales of Mystery and Imagination (1923), a further 8 colour designs by Clarke were published with the monotone suite that had been published in 1919. 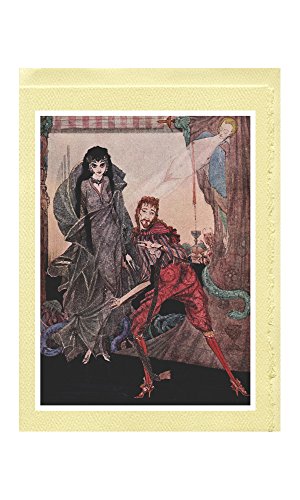 Harry Clarke Greeting Cards (8 Designs from "Tales of Mystery and Imagination" [1923])
The illustrations on these Greeting Cards are prepared as tipped-on plates - in the manner of prestige illustrated publications produced in the early decades of the 20th Century. Those tipped-on features are applied to acid-free Ivory card with an accompanying envelope. Each card measures approximately 7 x 5".
Buy Now

The titles of Clarke's color illustrations for Tales of Mystery and Imagination (1923) follow:

Goethe's rendition of "Faust" is the most known version of Faustian literature. It is composed as a play, but belongs to the genre of 'Closet Drama', indicating that, rather than being performed, it is meant to be read. The main characters include: Faust (a character that has been linked to both the historical life of Johann Georg Faust and Bidermann's Legend of the Doctor of Paris); Mephistopheles; Gretchen (Faust's love); Marthe (Gretchen's neighbor); Valentin (Gretchen's brother); and Wagner (Faust's famulus). Faust tells the story of what follows from a wager between Mephistopheles and God the results in the arch-villain trying to deflect God's favorite human - Faust - who is striving to learn everything that can be known, away from righteous pursuits. 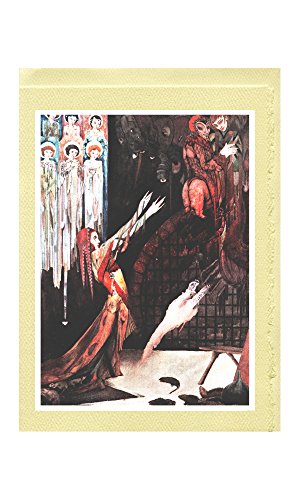 Harry Clarke Greeting Cards (8 Designs from "Faust" [1925])
The illustrations on these Greeting Cards are prepared as tipped-on plates - in the manner of prestige illustrated publications produced in the early decades of the 20th Century. Those tipped-on features are applied to acid-free Ivory card with an accompanying envelope. Each card measures approximately 7 x 5".
Buy Now

Clarke's contribution to Faust (1925) is reminiscent of his darker illustrations - most noticeably those he contributed to Tales of Mystery and Imagination (1923) - but move beyond the horrific to the outright weird. Stylistically, the work is both superb and - historically - an important influence on the psychedelic that became well known during the 1960s.

The titles of Clarke's color illustrations for Faust (1925) follow:

Clarke's monotone work for Selected Poems of Algernon Swinburne (1928) is deliciously dark and sensuous - it is the quintessence of his style. Undoubtedly, his unrestrained approach throughout his suite of illustrations for this work was responsible - in no small part - for the equivocal reception of the images upon release. In Clark'e native Ireland, for example, the illustrations were considered so provocative at the time of publication that the title was banned.

Is there a most popular suite of illustrations by Harry Clarke?

Which suite of illustrations by Harry Clarke is your favorite?