How to make a Lotus Flower. Simple version and Origami versions. Plus why are they so special in Hinduism and Buddhism

Why is the Lotus flower special?

The Lotus flower is a fragrant pink or white flower, which is native to eastern Asia and Australia. Other names it is well known by are the sacred lotus, Indian lotus, or as simple as the white lotus. It is also known as the Egyptian water lily.

With many cultures throughout Asia the lotus has been a powerful image or religious symbol. Hindus, Buddhists and ancient Egyptian religions have all known the lotus as a sacred flower.

The lotus grows in unclean water and because the blossom is a pure white colour, it has come to be seen as a symbol of purity and resurrection. It also has many other meanings though, like spiritual development and creation, and has also come to represent divine birth.

Below are two main religions which use the Lotus flower to represent something special. They are side by side so you can compare the two.

What does the Lotus flower mean to Hindus?

The Lotus flower is a very important symbol in Hinduism. It represents beauty, prosperity and fertility. Other meanings it has come to represent are purity, divinity, eternity, fertility, youth and a symbol of life. The spirit of the sacred lotus is within everyone one, according to Hinduism.

It is believed that a person should work without attachments, untouched by sin. The lotus roots are not attached to the waters bottom, and the flower stands high above the mud and water, so it is a true representation of their beliefs. They go further by saying that people should strive to reach the highest level of consciousness, which is represented by the thousand petalled top of the head of the flower.

Hindus believe that the cosmic waters grew a thousand petalled Lotus flower of pure gold. This Lotus grew from the navel of the God Vishnu; at the center of the flower sat Brahma (the Creator), Vishnu (the Protector) and Siva (The Merger). This was considered to be a doorway, or even an opening to the womb of the universe. Brahma was charged to re-create the universe after the great flood. In this task he used different parts of the Lotus plant.

The Goddess Lakshmi (patron of wealth and good fortune) has her divine seat on top of a blooming pink Lotus and also holds a Lotus in her right hand. A garland of 108 lotus seeds is still used today to worship Lakshmi.

The Goddess Durga (Patron of Power) was created by Lord Siva to fight demons and was adorned with a garland of Lotus flowers by Varuna.

The Goddess Saraswati (Patron of Wisdom) is linked with the white Lotus.

In fact nearly every God or Goddess of Hinduism is associated with the Lotus flower. They are usually depicted as sitting on top of one because the flower represents purity and divinity.

Because of this, the Lotus flower is used as an offering to the Gods.

What does the Lotus mean to Buddhists?

Mud represents that all humans are born in a world of suffering. This is however a vital part of human enlightenment; it makes us stronger and teaches us many things like how to resist temptation. Everyone should choose the right path over the easy one to reach enlightenment. Only when all evil thoughts are banished from our minds can a person break free of the muddy water and become one with Buddha.

And finally, the Lotus flower represents rebirth; the flower growing from the murk. A rebirth of ideas, and acceptance. Also a rebirth as in reincarnation. 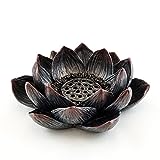 And what about the ancient world?

In ancient Egypt, the Lotus represents the sun, and with this, creation and rebirth. This comes in large with the fact that the petals close at night and sink underwater, only to rise and open again at dawn. It was said that the Lotus gave birth to the sun and therefore was a very important part of ancient Egyptian culture and beliefs.

So how do I make my own Lotus flower?

There is a few ways I am going to include in this hub, ranging from an easy method to a more complicated but very effective origami method of making your own.

So take a look below to see how you can make your own.

What will I need for this easy flower?

1. The easiest of the Lotus flower creations:

What do you need for this simple Origami Lotus flower?

What do I need?

4. How to make a 20 petal Lotus flower with Stamen

The forth version of this is too complicated to follow from a set of instructions but I have included it as it makes a great Lotus flower. I think it would be best to watch the video and do as you see.