How to make a Star Wars R2D2 Costume

This IS the droid you are looking for…

When my son decided that he absolutely MUST be R2D2 for Halloween I did what every red blooded American would do… I googled it. It was dismal. I wanted to just purchase a cute little Star Wars costume, and I quickly realized that wasn't going to happen. Shortly after, I started looking at images of different R2D2 costumes that I could make…that wasn't very promising either. To me everything looked ridiculously cheesy and not even close to mimicking my beloved Artoo or it was something my child would be able to wear for about 30 seconds and then start whining about how uncomfortable it would be. I mean seriously? Like a 4 year old is going to wear a trash can on his head and a cardboard tube on his body for hours of trick or treating. Pssh!

What I finally decided to do was mash together several ideas I found and make the perfect R2D2 costume. It wasn't easy…it wasn't cheap. BUT he was R2D2, and a particularly cute one, at that. So, if you are desperately searching for a wearable Star Wars R2D2 costume…

Yes, these are the instructions for the droid you are looking for…

Perfect for every R2D2 fan's room. 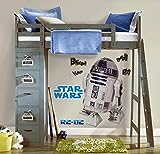 The construction of the R2D2 costume is really simple. You need a domed head, a cylindrical body, and some legs. It’s the detailing on the costume that becomes time consuming. Honestly though, anyone can do it. The designs are simple squares lines and circles. Easy enough…just time consuming. So let’s start with the head.

Start off by taking your play ball and finding a way to get it to stay stable on your workspace. Now this is one of those big balls you get out of the rack at your local discount store for about $3. It needs to be big enough so that the body of the costume can hang down from within it…so yes, at least as big around as your child’s body. It will be destroyed like the Death Star in this creation, so don’t get attached to it.

With your ball stabilized, your paper mache paste ready, and your newspaper strips handy, begin to paper mache the top half of the ball. Cover the top half of the ball with one layer of paste covered newspaper strips. VOILA! A domed head. Let it dry overnight and repeat…4 times. That’s right. Four layers of paper mache. The head needs to be sturdy, and if you put on multiple layers of newspaper at a time, it won’t dry out and the head could get moldy. No one wants an R2D2 that looks like he just rolled out of the swamps of Degobah, right?

After the 4 layers of paper mache have dried, it’s time to remove the ball. Take a knife and cut the ball. Once all the air is released, the head will pop right out.

Next, spray paint the head silver. A couple of coats will do. While you have the spray paint out, paint two 3 ounce dixie cups.

Unless your child is strong with the Force you will also need a way for him to see out of the head. No problem. Starting about 3 inches from the bottom of the head cut a 7 inch by 3 inch rectangle with an Exacto knife. Don’t worry; this hole does mimic the detailing on Artoo. He has several long ways rectangles along the bottom of his domed head.

You are now ready for the blue mesh. Cut a 9 inch by 5 inch rectangle out, and with fabric glue attach it to the inside of the head over the hole you just cut. I used mesh, but really any see through blue fabric will do. Or, if you still want to be able to see your droids eyes just omit this step.

On to the decorating; R2D2’s markings are really quite distinguished, but let’s face it, you probably won’t get an exact replica. So decorate as you please. I used a figurine as a model. I cut out the blue areas with my blue fleece and glued them on with to the head decorating some of them with silver fabric paint as I went. I also attached the two Dixie cups and the red Easter egg to it for his “eyes”. For the little red/blue circle under his red eye I just attached a piece of red cardboard. I even went a little crazy and outlined the whole thing with glow in the dark fabric paint.

You will notice that once you have the head decorated that it doesn’t really sit straight on your child’s head or that it moves around a lot. To remedy that I bought a cheap kid’s hat at the dollar store and attached it to the inside with glue. That way he’s really wearing the hat not the head.

Now that you have an epic R2D2 head, it’s time to make the body. I wish I could give you exact measurements, but it really depends on the size of your ball and the height of your child. First measure the circumference of the inside of the head, and add 2 inches. Put the head on your child and measure from the inside of the head down to about 12 inches from the ground. Cut out the white fleece using those dimensions. Mine was a 3 ½ foot by 2 ½ foot rectangle.

Since you want the opening of the costume to be in the back, you need to find a place for the front center of the body before you cut out the arm holes. BUT before you can judge where the arm holes must go, you need to attach the head to the body. Using the fabric Velcro, iron on a strip along the whole length of your white fleece rectangle. Then take your sticky Velcro and attach a strip along the inside of the head. Since you are working with two kinds of Velcro, make sure to use the right sides of the Velcro so that the two will stick together.

Have your child put on the head, and then attach the body to the head. Using his shoulder as a gage, use a fabric pencil to mark where the top of the arm holes need to be. Once the costume is off your child, use a plate or other similar oval or round object to draw the arm holes on the fleece. Then cut out the arm holes. To give you an idea, my arm holes were 8 inches tall and six inches wide.

You know you want your own droid. 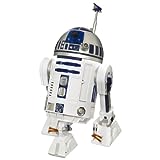 Some tips for decorating:

Once the body is decorated, it’s ready for the finishing touches. First attach Velcro along both sides of the costume; it’s like a zipper to hold the gap in the back of the costume together. The final finishing touch of the body is the boning. This is optional. I used it so that the body would keep its cylindrical shape. My guess is that without it, it would still look quite similar, just not as perfectly cylindrical. The costume would just hang, not have a defined shape. If you decide to use it, it can be purchased by the yard at your local fabric store. You need enough for two lengths of the costume. It can be attached with fabric glue to the inside of the costume a few inches below the arm holes and a few inches from the bottom of the costume. If I made this costume again, I would more than likely use it, but I’m still not sure it’s necessary.

FINALLY, the white sweatshirt. By now, I’m sure you wishing that I had to spend the rest of my days on the frigid planet of Hoth, but don’t worry, you are almost done. The arms of the sweatshirt make up R2D2’s legs. So decorate them as such using the same fleece cutout /fabric paint combo that you have been throughout the costume.

You've made it through to the end of this long tutorial: congratulations! I hope you’ve found the droid you are looking for. If not…move along.