The Incredible Art Of Julian Beever!

Julian Beever is an English chalk artist who has been creating chalk drawings on pavement since the mid-1990s that create the illusion of three dimensions when viewed from the right location. These trompe-l'oeil drawings are created using a projection called anamorphosis and appear to defy the laws of perspective.

Besides the 3D art, Beever paints murals and replicas of the works of masters and oil paintings, and creates collages. He is often hired as a performance artist and to create murals for companies. Beever is interested in advertising and marketing, as well. He has worked in the UK, Belgium, France, The Netherlands, Germany, Austria, Denmark, the USA and Australia.

The pavement drawings have included both renderings of old masters plus a wealth of original inventive pieces of work.

Julian Beever has made pavement drawings for over ten years. More chalk drawings from Julian Beever. Scroll down slowly and stop at each new frame. Incredible!!!!!

Below is Beever's self-proclaimed best-known drawing, "Swimming-pool on High Street." "My art is for anybody. It's for people who wouldn't go into an art gallery. It's art for the people," explained Beever, when asked why he prefers the pavement to more traditional artistic mediums.

Since 2004 a chain letter containing his art (sometimes mixed with similar art by Kurt Wenner) has been circulating on the Internet.

For more insight please read my hub about Kurt Wenner. You can find a lot of pictures and a video how his art is done in this hub. Enjoy!

Is this the real thing!

Featured in Treasure Hunting magazine, Beever's mounds of gold were part of a series used by White's Electronics of Inverness, the world's leading metal detector manufacturers based in Inverness, United Kingdom. See the picture below.

The Artist At Work! The Fountain of Youth.

Beever's "Rescue" was meant to be viewed through an inverting mirror. "I used to do portraits and conventional drawings on the sidewalk," explained Beever. "One day I saw a particular sidewalk where there were rectangles of tiles and that gave me the idea to create [3D drawings]." Beever continued to experiment and eventually realized that "if you could make things go down in the pavement, you could also make them look as if they're coming out of the pavement." Below is the picture.

Below is, "Portable Computer," drawn on the Strand in London. Typically, Beever's drawings take three days to complete and remain as long as the weather and pedestrians permit. However, months of planning and preparation go in to his creations. "When you're working outdoors, you never know what's going to happen -- it can always go wrong. It's a pleasure and relief to get it finished."

Above is the masterpiece, taking inspiration from his tools, Beever constructs his own rendition of a Rembrandt. The full effect of Beever's work is truly appreciated only when viewed through the wide-angle lens on his camera. To construct these masterpieces, Beever painstakingly double checks each stroke through that lens to make sure it achieves the desired effect. "It's very hard work but running about between the camera and the drawing keeps me warm, and I just keep aiming at my final result," he said.

Many of his creations are optical illusions, such as this one, where Julian appears to be perched on a ledge, waiting for Batman and Robin to climb the building and rescue him.

In reality, there is just pavement in front of him, and the street below together with the expectant crowd, plus the blazing building below him, are all tricks played on the eye (a modern example of trompe l'oeil - a French term that means literally 'trick the eye').

An absolutely insane chalk drawing on the pavement. Batman an Robin are going to save a man from a burning building. Don't you get high anxiety when you look at this drawing ? Note the level of details : the real pavement is actually casting a "shadow" on the buildings below it.

Some images of the street drawing

Julian Beever when the actual artist

You’ll notice that Kurt’s artwork has

a much more classical flavor to it than

Julian’s. That being said, both artists

are incredibly talented. You can also

Ok. Now you must be real bored scrolling down all this way. Although I have many more in my collection, I will stop this with one last picture. Thank you for your patience and support. Please do not forget to comment. Do you know that Julian also makes fine art paintings? 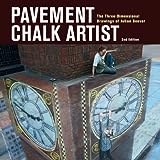