Inukshuks of the Arctic Region

Athlyn Green enjoys learning about historical figures/different cultures and how these have left their mark on the world.

In areas considered the coldest in the world, inukshuks stand sentinel, outlined in rugged contrast against the sky. These stone markers or cairns, as they are called, are distinctive landmarks and can be seen from miles off and all across the tundra biome, dotting the landscape from Alaska to Greenland.

Inukshuk or inuksuit (plural) were fashioned in different shapes and sizes, from a single stone to a number of stones stacked one on top of the other. Inukshuks were difficult to construct due to the sheer weight of the stones and the shapes needed to form them. In most cases, a number of flat stones were used, crowned by a round stone.

Many have wondered, who built them? To the uninitiated, the stone formations may seem a mystery and the creators of them, mysterious, as well.

These stone formations were built by hardy inhabitants of the North--Inuit, Inupiat, Kalaallit, and Yupik peoples, to name a few, Canadian Inuit who inhabited and traveled across inland and coastal regions of the Arctic. It is was upon an unyielding and unforgiving landscape, a land of harsh winters and bitter cold, that these ancient peoples passed by and left their mark on the landscape, building the many different inukshuks that are seen today.

A definition of Inukshuk

Something that symbolizes or performs the function of a human. The widely recognized innunguaq, in fact, represents a human figure, and in some of these formations, the Inuit stuffed Arctic heather to resemble human hair.

Why Were Inukshuks Built?

These formations weren't just indigenous art. They had a purpose and played a critical role in the daily lives of Northern peoples.

Different inukshuks served different functions. An inukshuk with an open leg might have pointed to a navigable marine channel, so those who came across it knew they could continue their journey on the water; an inukshuk with an open arm or designed with one longer arm may have suggested a directional route, which could be a godsend if someone had lost their way or if weather conditions were such that seeing the way ahead was challenging ; an inukshuk perched on a shoreline could have indicated good fishing nearby.

In a place where man was largely at the mercy of the elements, the inuksuit, constructed as they were of stone materials, were impervious, withstanding extreme weather conditions across a barren, snow-covered wasteland.

Author Norman Hallendy, in his book Inuksuit: Silent Messengers of the Arctic, August 2001, remarks "For traditional Inuit, survival meant adapting perfectly to the environment." This entailed using materials at hand: "blocks of snow for winter shelter, and stone, skin, ivory and bone as the foundation of their material culture."

As can be seen from the wealth of information that could be gleaned from different inukshuks, these formations played an important part of daily life and daily activities.

What Messages Did They Portray?

Cooperation and Sharing Information a Matter of Survival

In such a harsh and potentially dangerous climate, one of extreme cold, of icy winds, of blizzards, there was little room for non-cooperation among peoples. Surviving and thriving was a group effort, not a solitary endeavor. Living so close to earth, the inhabitants knew this and lived their lives by codes of conduct and community that have largely been forgotten in urban environments.

There are so many inukshuk at Enukso Point on Baffin Island, it was declared a National Historic Site of Canada

A White and Jade Inukshuk

The inukshuk symbolizes co-operation, balance and unselfishness among peoples to serve not just the individual but the community at large. As such, they symbolize humans working together for the greater good.

Each stone in an inukshuk balanced on and was supported by the other stones, thus the stones as a unit made for a stronger structure. For the Inuit, the inukshuk represented a philosophy of survival, made possible by friendship, cooperation and team effort.

That secondary message strikes a chord with collectors who recognize the intrinsic value in an other-centered mindset and way of life that shows love for the human family. For many collectors, buying an inukshuk is a reminder that humans need to come together for the good of the global community. 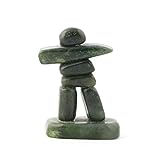 In modern times, the inukshuk continues as a cultural symbol for the Inuit and can be seen on flags, on coats of arms and in replicas crafted from various mediums. These replicas have become sought-after souvenirs that touch a chord with a global audience.

Collectible inukshuks come in a variety of materials. Some artisans make them from soapstone or from clear or frosted glass. Some are made from serpentine or granite, from brucite or alabaster. At other times, they are fashioned from different-colored polished stones, such as jade or marble, and these can be quite beautiful. Some inukshuks are grouped together to form a friendship circle.

Because of their importance to human safety and survival, Inuit tradition forbade their destruction.

A Symbol of the North, Inukshuks Stand Impervious to the Elements And They've Had a Global Impact

Modern-Day Adoption of This Symbol of the North

Increasingly, the inukshuk is being adopted as a Canadian symbol. The 2010 Vancouver Olympic mascot, Llaanag, (friend) is based on the Inuit inukshuk, paying homage to indigenous peoples.

In different areas across Canada, large inukshuks are being constructed for oustide areas or sculptures donated to public buildings.

Inukshuks, built over a 4000-year periid by the Inuit, may have come down to us from antiquity but they have a fitting and has an honored place in modern times, a reminder to the human family at large of the importance of global friendship and interdependence.

Have you seen large inukshuks in different locations in Canada?