Irish Symbols and Their Meanings

The Irish people have a culture rich in traditions and symbols, and today those symbols are often found in rings, coins, flags, jewelry, and even tattoos. But exactly where do they come from, and what do they mean? A little research turns up a lot of information about these images, from history and legends to unexpected places in which they appear. Here are just a few of the fascinating images and symbols that permeate Irish culture:

Originating in the fishing village of Claddagh, near the city of Galway, the Claddagh is a ring traditionally given to a lover for an engagement or wedding, or as a symbol of affection. It was first produced during the reign of William and Mary in the late 1600s and continues to be used as a wedding ring by many modern couples, especially those with Irish heritage. The heart, hands, and crown of its distinctive design stand for love, friendship, and loyalty respectively, and the ring can be worn in different ways to indicate the relationship status of the wearer. According to one tradition, a Claddagh worn on the right hand with the point of the heart facing down, toward the end of the finger indicates a single wearer, while turned around, it signifies romantic attachment. Worn on the ring finger of the left hand, the ring indicates engagement or marriage.

The Claddagh is a descendant of an ancient Roman tradition of giving fede rings or "faith" rings to represent commitment or loyalty, a tradition gave rise to the broad use of engagement and wedding rings in Western culture. The term "Claddagh ring" was coined in the 1840s, when early accounts suggest that it was frequently used as an heirloom wedding ring, traditionally passed from mother to eldest daughter upon her wedding day. However, this seems questionable, given that most Claddagh rings produced before 1840 seem to have been made for men. Today, the ring may be found in many different styles, with more delicate, jeweled varieties for women and thicker, engraved Claddagh rings for men. 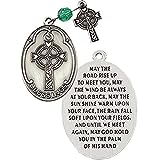 The origins of the Celtic cross are not entirely certain. Popular legend holds that it was introduced to Ireland by St. Patrick or St. Declan in order to explain the importance of the cross to Irish pagans. In this origin story, the circle surrounding the center of the cross was supposed explain the importance of Jesus' sacrifice by linking the cross to the life-giving sun. However, art historians have recently disputed this story, finding it more likely that the circle represented a victor's wreath, as seen in some English designs from the period.

In the early days of Christianity in Ireland, Celtic crosses were used as freestanding monuments. A number of huge high crosses were erected in the eighth century and probably followed earlier versions constructed from wood. These crosses were often decorated with ornate Celtic art and occasionally displayed inscriptions carved in runes. This tradition later evolved into a custom of using Celtic crosses as grave markers, a practice which became particularly fashionable in the 19th century. From this point onward, it also became a symbol of Celtic heritage and pride and is today a popular design for jewelry, particularly pendants.

In a few unfortunate cases, it has also become an emblem of white supremacy, serving as the logo of the white nationalist, neo-Nazi internet forum Stormfront.org and as the symbol of banned political parties in Germany and Italy. The Zodiac Killer also signed his letters with a symbol resembling a Celtic cross. However, for most of its wearers, the cross is still representative of Christian faith, pride in Irish heritage, or both and has nothing to do with fascism, homicide, or hate.

Made from rushes or occasionally from straw, St. Brigid's Cross seems to have first appeared in the 17th century, but the legend of its origin is set in pagan times. According to popular myth, St. Brigid was called to the deathbed of a dying Celtic lord by some of his Christian servants in order to try converting him to Christianity before his death. However, when Brigid arrived, the man was too delirious to understand her, so she began weaving together rushes from the floor of his sickroom. When asked what she was doing, she explained that she was weaving a cross, and the lord's delirium slowly gave way to questioning. Converted, he was baptized just before he died.

Later, it became tradition to weave St. Brigid's Crosses on February 1st, the Feast Day of St. Brigid. These crosses were hung in Irish homes to ward off evil, particularly fires, and were therefore most common in kitchens. The cross has more recently served as a logo for Raidió Teilifís Éireann, the Irish public broadcasting service, and can be found in many shops and Irish homes as a symbol of faith and heritage.

Played by Brian Boru, the legendary High King who ruled all Ireland in the eighth and ninth centuries, the harp has been a symbol of Ireland ever since. In 1542, it was adopted as an official symbol and has been displayed on the Royal Standard of the British royal family since the reign of King James I/VI of England, Scotland, and Ireland. It also featured on the flags of the Commonwealth during Cromwell's Republican rule of Britain in the 1600s and can be seen today on the flag of Leinster. 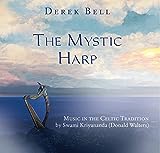 While the two plants are commonly confused, the shamrock and the four-leafed clover have very different meanings. While the first has three leaves and is a symbol of Ireland and the Christian Holy Trinity, the second is one of the best known good luck charms. While the three leaves of a shamrock are sometimes said to represent Father, Son, and Holy Spirit, the leaves of a four-leafed clover are said to represent faith, hope, love, and luck. Additionally, the shamrock is a specific kind of clover, the three-leafed old white clover, while four-leafed clovers can be found in any clover species. In fact, the shamrock's name indicates its uniqueness among clover. It comes from the Gaelic seamróg, a diminutive of seamair, the name used to refer to all clover. However, in spite of shamrock referring to a specific species, four-leafed clovers, produced by mutation, are rarer. They only occur in 1 out of every 10,000 clovers, which must be why it's considered so lucky to happen upon one!

While a legend dating back to 1726 states that St. Patrick used the shamrock's three leaves to teach Irish pagans about the Trinity, historians now say that this seems unlikely, because there is no earlier mention of this story, nor is it indicated anywhere in St. Patrick's writings. Its origin as a symbol of Ireland may instead date back to ancient Celtic religion, when the druids believed that three was a magical number. Regardless of historical significance, the shamrock became a symbol of Irish nationalism, pride, and rebellion against the English. In the 19th century, Irish people could even be hanged as traitors for wearing it!

Today, the shamrock is a registered trademark of Ireland and is used as the symbol of a number of sports teams, including the Boston Celtics. It can also be found on Britain's royal coat of arms and is traditionally worn on the lapel in Ireland and other countries to celebrate St. Patrick's Day. The shamrock is even found on foreign flags, such as the flag of Montreal, where it represents the city's large Irish population.